As fun as it is cheering on Aussies from the comfort of your lounge while covered in potato chips, the Olympic Games are also a showcase of some of the biggest names in world sport.

With the Games now just a week away from starting, here are ten of the biggest international stars to keep an eye on throughout the competitions.

Kevin Durant (United States – Basketball)
Think only Americans watch the NBA? Try the fact Kevin Durant has more than 19 million Twitter followers on for size. Many of them are scattered across the globe and while Durant isn’t exactly renowned for his pithy one liners on social media, the current Brooklyn Nets small forward is undoubtedly one of the most popular basketball players on the planet.

He’ll have plenty to live up to; only once has Team USA failed to win gold since NBA players were introduced into the Olympics in 1992.

Shelly-Ann Fraser-Pryce (Jamaica – Athletics)
Often regarded as the greatest female sprinter in history and quite literally one of the fastest people on the planet, there’s not much Shelly-Ann Fraser-Pryce has left to prove when she hits the starting blocks in Tokyo. A two-time gold medallist in the 100-metres, Fraser-Pryce saw her efforts to claim a third consecutive gold medal hampered by injury at the last Olympics in Rio de Janeiro, where she ultimately finished third.

Since then she’s become a mother, claimed a fourth 100-metre world championship and still found time to set a string of personal bests. Undoubtedly one of the finest athletes Jamaica has ever produced, the lightning quick ‘Pocket Rocket’ has largely seen her career achievements overshadowed by those of compatriot Usain Bolt. But unlike Bolt she’ll be in Tokyo, where Fraser-Pryce will attempt to pull off the 100-metre and 200-metre double.

Gabriel Medina (Brazil – Surfing)
If the Olympic Games are all about sportsmanship, Brazil’s world number one surfing ace Gabriel Medina might want to brush up on his etiquette before he hits the relatively small waves of Shidashita Beach in Chiba.

Medina is widely regarded as the world’s best surfer but he doesn’t always play fair, as his compatriot Caio Ibelli discovered in December 2019. With Ibelli enjoying one last wave to try and best Medina’s score at the Pipe Masters in Hawaii, Medina deliberately dropped in on Ibelli’s wave to prevent the challenger from posting a winning total.

Justice prevailed when Medina went on to lose the final and there’ll be plenty keeping an eye on the Brazilian’s win-at-all-costs antics when surfing makes its Olympics debut.

Katinka Hosszú (Hungary – Swimming)
Could this be the final hurrah for one of swimming’s great names? Katinka Hosszú may not be the most recognisable star outside of her native Hungary but there’s no denying the impact she’s had in the pool. Tokyo marks Hosszú’s fifth straight Olympics, but it at was the 2016 Games in Rio where the 32-year-old really left her mark. Breaking the world record in the 400-metre individual medley, Hosszú finished with three golds and one silver in Brazil.

Such is her will to win that that Hosszú has long been known as ‘The Iron Lady’. She’s also phenomenally successful and in 2014 she became the first swimmer – male or female – to win $US 1 million in prize money. One of Hungary’s most popular athletes, she married polarising American coach Shane Tusup in 2013 before the pair split in a blaze of acrimony five years later. But it’s for her efforts in the pool that Hosszú is hoping to be remembered.

Masahiro Tanaka (Japan – Baseball)
Host nation Japan will have no shortage of local heroes to cheer on, but perhaps none needs a redemption story as much as Masahiro Tanaka. The Tohoku Golden Eagles pitcher has played at an Olympics before when baseball last appeared at the Beijing Games in 2008, but it’s not for his international career that he’s most renowned.

Signed by the New York Yankees on a seven-year deal worth $US155 million in 2013, Tanaka was expected to be the next Japanese star to take Major League Baseball by storm. But things never seemed to click for the often injured right-armer and after seven frustrating seasons, he re-joined his former club as the highest-paid player in Nippon Professional Baseball. Now 32, Tanaka will be expected to lead his Japan side into medal contention.

Sky Brown (Great Britain – Skating)
“It’s not just boys fun!” sung American punk band 7 Seconds and Great Britain skateboarder Sky Brown proves that in spades. Not only will she become the youngster-ever British Summer Olympian when she hits the ‘park’ skating circuit in Tokyo having just turned 13, but she’ll do so with two very different cultures keeping a close eye on her progress.

Born in Miyazaki in the deep south of Japan, Brown represents Great Britain courtesy of her British father. She comes from a family of skaters and her breezily curated YouTube channel has already racked up millions of views. And while her decision to represent Great Britain comes as a blow to her homeland, it makes sense given the bulk of her endorsements will invariably spring from English-speaking sponsors. But first she has an Olympics to conquer as one of the youngest – and most precociously talented – competitors in the Games.

Wilfredo León (Poland – Volleyball)
A genuinely huge name in the world of volleyball, the Cuban-born outside hitter has led the sort of life they turn into Hollywood movies. Once the star of Cuba’s national team, León finished runner-up at the 2010 World Championship when he captained his side all the way to the final against Brazil aged just 17.

In 2013 he defected, leaving his homeland entirely after his request to sign for a European club team was rejected by the Cuban federation. A year later he signed for Russia club Zenit Kazan before receiving Polish citizenship in 2015.

Now married to his Polish wife Małgorzata, he’s been a regular for Poland since 2019. Often called the Cristiano Ronaldo of volleyball, León is expected to turn the Poles into a genuine force in Tokyo.

Lydia Valentín (Spain – Weightlifting)
Lydia Valentín is on a personal mission. Where once weightlifting was seen as a predominantly male sport, today lifters like Valentín are helping inspire a new generation of female athletes. And with a haul of silver, gold and bronze medals to show for her three Olympics to date, it’s not hard to see why Valentín is such a popular figure.

Set to compete in the 87-kilogram category in Tokyo after spending most of her career in the 75-kilogram class, Valentín’s bubbly persona and carefully-curated social media content belies a tough competitor. The 36-year-old has said her fourth Olympic Games will be her last, but she’ll be determined to go out on a high after watching weightlifting enjoy a surge in popularity among female lifters. Whether she can step up in a new weight category remains to be seen, but she’s not the type of competitor to go home wondering.

Chris Wood (New Zealand – Football)
Don’t laugh, but are New Zealand potential dark horses in the men’s football tournament? If they are it will be in no small part thanks to the unrelentingly physical presence of one of their overage players in the form of talismanic striker Chris Wood.

The 29-year-old Auckland-born striker has now reached double figures four seasons in a row in the English Premier League for Burnley and he’ll line up for a Kiwi side stacked with talent. And it’s Wood’s uncompromising style that makes him one to watch in a lightweight-looking Group B also containing Honduras, Romania and South Korea. Like Shane Smeltz before him, New Zealand’s bustling number nine could be about to stun the football world. 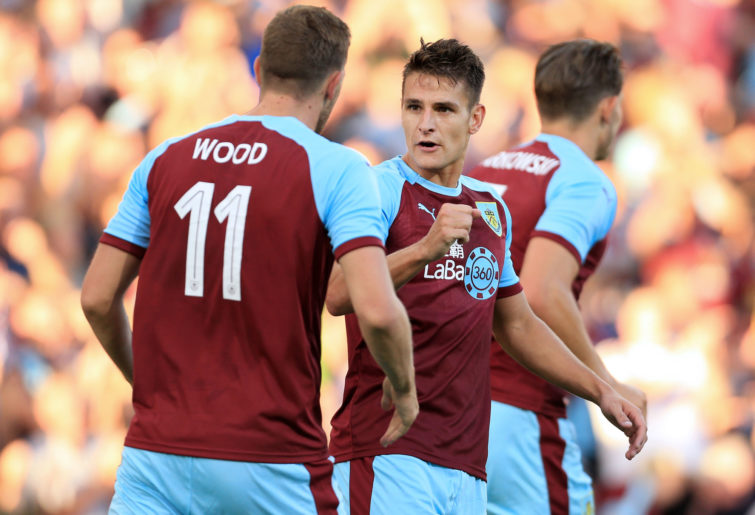 Ashley Westwood of Burnley (C) congratulates teammate Chris Wood of Burnley on his goal during the UEFA Europa League Second Qualifying Round 2nd Leg match between Burnley and Aberdeen at Turf Moor on August 2, 2018 in Burnley, England. (Photo by Simon Stacpoole/Offside/Getty Images)

Well accustomed to the spotlight, the amiable Slovenian is no novice when it comes to major international events – despite being set to make her Olympics debut in Tokyo. She started climbing competitively at age seven and is these days considered the best female climber in the world, but it will all count for little unless she comes home with the gold.