As was the case for their Round 11 match, Victoria is again in a COVID-19, lockdown meaning no fans will be permitted into the ‘G for the return match between the two premiership contenders, in which the Bulldogs will be seeking revenge for their defeat to the Dees.

Luke Beveridge’s side rebounded from their Round 17 loss to the Sydney Swans by beating the Gold Coast Suns by 11 points on the holiday strip, but it did not come easy as the home side actually kicked the first three goals of the match.

A major highlight of the Dogs’ win was the first AFL goal kicked by last year’s top draft pick, Jamarra Ugle-Hagan, in the first quarter; he ended up kicking three goals for the match after a quiet debut last week.

Such was his breakout performance against the Suns, captain Marcus Bontempelli has backed the youngster to become a major factor in September.

Speaking of which, their premiership credentials will be put to the test once again when they face Melbourne in what will be their third outing at the MCG this season, having previously beaten Collingwood in Round 1 and gone down to Richmond in Round 7.

The Dogs suffered a 28-point defeat in Round 11 – their worst of the season thus far – as the Dees midfield, led by Christian Petracca and Clayton Oliver, shut down the Bulldogs’ run through the middle, while the defence led by Steven May and Jake Lever restricted the Scraggers to only eight goals.

Simon Goodwin’s side retained top spot on the ladder but only did so after being pegged to a 79-all draw against Hawthorn at the MCG last Saturday night – the club’s first drawn result since Round 1, 2011 against the Sydney Swans.

Worryingly, it was the fourth time this season that the club had lost premiership points against a side currently outside of the eight, with their three losses coming against the Adelaide Crows, Collingwood and GWS. Out of those three, only the Giants’ finals hopes remain alive.

The Dees’ recent form, which has been patchy at best, comes as a worry for long-suffering fans, who have not seen their side go all the way since 1964.

Their draw against the Hawks has now thrown the race for the minor premiership wide open, with percentage no longer a factor.

Though both the Dees and Bulldogs would love to finish on top of the ladder, the ultimate aim for both clubs is to win the flag; if both end up facing each other on grand final day this year, it would be the first time in exactly 67 years that this has happened.

On that occasion, the Dogs won their first premiership by thrashing the Dees by 51 points; that preceded the Dees winning five of the next six flags, the only loss being against Collingwood in 1958, a defeat which denied the club a record-equaling fourth consecutive flag.

Little did Footscray supporters know that they’d have to wait 62 years for the club’s next flag, which came in stunning fashion when, after finishing seventh on the ladder, they won four consecutive finals, culminating in a 22-point win over the Sydney Swans in the grand final.

For the sake of the current crop of Bulldogs supporters, let’s hope that they don’t have to wait until 2078 for the club’s third flag.

The club winning the 2016 flag now means that Melbourne has the current longest active premiership drought, 57 painfully long years having passed since they won the last of 12 flags.

The Dees’ premiership drought has been attributed to the curse of Norm Smith, who was sacked in 1965 only to be reinstated as coach a week later; he was never the same coach thereafter.

To finish off, whoever wins out of Melbourne and the Western Bulldogs at an empty MCG this Saturday night may as well move ahead in the premiership favouritism race. 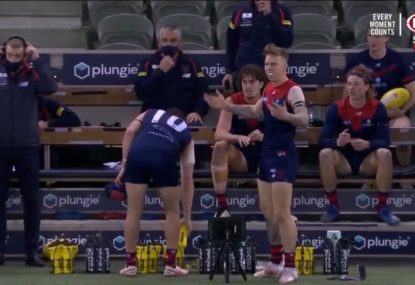