The Titans debuted a very talented halfback called Toby Sexton, who was very impressive against the Dragons and will definitely have a bright future. The young half scored on his debut thanks to an error from the Dragons but he also ran for 160 metres, made 19 tackles and kicked for 259 metres.

The Titans’ forward pack dominated the Dragons and gave the Titans’ halves and backs a lot of time to produce their magic and set up tries.

The starting forwards all ran for over 100 metres except for Kevin Proctor but Titans prop Jarrod Wallace had his best game this year after he scored two tries, had a try assist and ran for 101 metres.

Corey Thompson – who is a very underrated player in the NRL – ran for 166 metres, broke eight tackles and had one linebreak.

Dummy-half Mitch Rein and lock forward Tino Fa’asuamaleaui were both really strong on defence after the two middle players combined for 66 tackles for only two misses.

Fill-in Dragons centre Cody Ramsey had a tough day out against the Titans because he had to mark up against David Fifita, Patrick Herbert and Greg Marzhew.

Ramsey was really caught out defensively after leaking multiple tries and missing four tackles. He went off the field with an injury after setting up a try for Jordan Pereira.

Matt Dufty at fullback for the Dragons had an up-and-down game but despite running for 185 metres, breaking through four tackles and having one line break and two line break assists, the Bulldogs-bound fullback did have three missed tackles and two errors.

There’s one thing I find positive about the Dragons and that’s Jack Bird’s attitude and his aggression that he shows. Bird was always up in the face of the Titans’ players and came up with an incredible try saver on David Fifita but he was also caught out on defence.

The Dragons take on the Rabbitohs, Raiders, Panthers, Roosters, Cowboys and the Rabbitohs again to finish off their NRL regular season and the only team I can see them beating is the Cowboys. But their attack and defence need to improve but if it doesn’t then I don’t see them making the finals in season 2021. 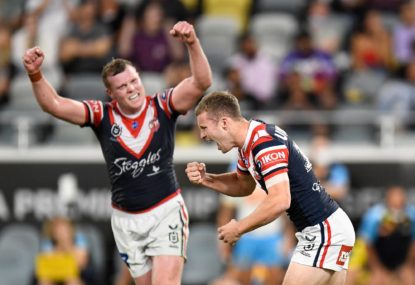 Gold Coast coach Justin Holbrook has bemoaned his team’s decision-making at the death after they crashed to a crucial 15-14 loss to Newcastle.