Isolation is a breeding ground for uncertainty and anxiety. If there is one lesson to be learned from the last 18 months, that is it.

Wind back the clock 47 years to South Africa in 1974, and it was not so very different. With apartheid still dictating the social and political mores of the country, South Africa was a nation divided, and an international pariah.

Sport in the republic was isolated from the rest of the world: the Springboks did not play a single international match between their game against England at Ellis Park on June 3, 1972, and the first Test against the touring British and Irish Lions at Newlands a full two years and five days later.

The COVID-19 pandemic has had much the same impact as the political disease. Almost 21 months elapsed between South Africa’s win at the World Cup in November 2019, and the first Test against a new pride of Lions in Cape Town last Saturday.

Without constant testing and exposure to challenges from without, you can never be sure of the legitimacy of your values. It is as true in sport as it is in politics.

In 1974, the Lions went to South Africa confident in the knowledge that their big men – Gordon Brown and Willie-John McBride in the second row, with Mervyn Davies behind them – were able to handle all the slings and arrows that outrageous fortune could throw at them. They had proved it by winning a series in New Zealand for the first time three years earlier.

They even picked Johan de Bruyn and his one glass eye, and that didn’t work either.

The Lions have been helped, not hindered, by the other impacts of isolation. They have not had to travel outside Cape Town since July 10 and the third match of the tour. There have been no flinty hard grounds, none of the lung-wrenching thin air on the high veld.

They have not had to visit the unyielding rugby heartlands of South Africa: the Bloemfonteins and Potchefstrooms, where the sight of a red jacket or jersey still summons an echo of deep, ancestral grievances.

The cloudless ferocity of the Afrikaner has largely gone missing from the provincial games, which the Lions have won by an average score of 58 points to 14. It will now be sea level, and the lush grass of Cape Town stadium, for the remainder of the tour.

Beating the Bokke big men is as close to a mortal blow to South African rugby pride as you can get, and that is what happened in the first Test last Saturday.

South Africa thought they would have the power to dominate through the likes of Eben Etzebeth, Pieter-Steph Du Toit and Franco Mostert, but it was Maro Itoje, Courtney Lawes and ‘the resurrection man’ – captain Alun Wyn Jones – who held sway and dictated terms. 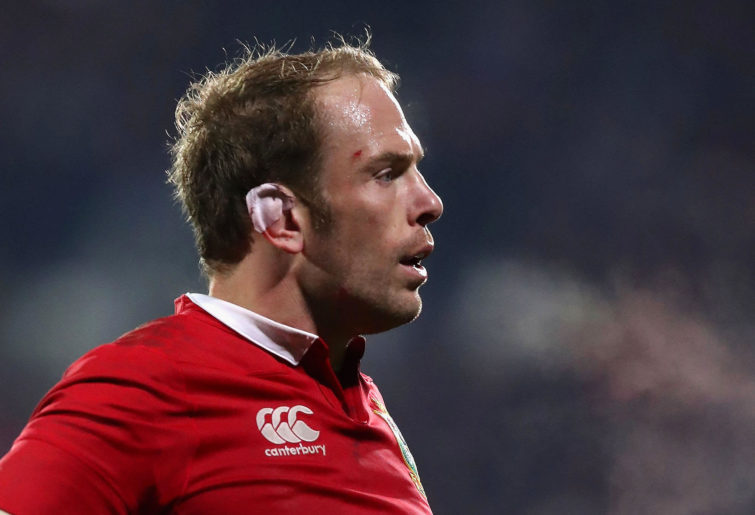 Such was their influence, that the Lions even had the luxury of riding over a fair few selection bumps of their own making. Mako Vunipola was not in the original 23-man matchday group and Kyle Sinckler was not even selected in the touring squad, but both played key roles in the Lions’ scrum resurgence in the second half.

Elliot Daly predictably found the going tough in contact at centre, coughing up a stream of turnovers and penalties. Courtney Lawes admitted that he had not received a ‘save the date’ email from the Lions’ coaches in the lead-up to the tour.

“I was pretty surprised [to be selected], I just didn’t really have any clue. Some players got emails and things like that, but I didn’t get an email.

“I didn’t last time either, so I was pretty much in the dark and waiting to see if I would get a shot basically.

“And obviously not being fit at the minute I thought my chances were quite slim.”

In the event, Lawes edged ahead of Tadhg Beirne and made an outstanding contribution at Cape Town, along with fellow England forward Maro Itoje. As Head Coach Warren Gatland commented after the game;

“I thought Courtney Lawes was brilliant. His lineout was good, great carries and footwork.

“Maro has had one turnover on the carry where he’s gone in too high, but he’s worked incredibly hard. They put in a really big shift, and then I thought the bench was great for us. In fact, our bench was more significant than theirs was.

“Both of them had outstanding games and that was key for us.”

The roles of the two were interlinked and complementary. Maro Itoje ran the Lions’ lineout, and called most of the throw (six in all) to Lawes. This provided the best ball for the Lions’ drive.

Lawes catches, Alun Wyn Jones and Itoje lead the drive through, and the only way the Springbok big men (Du Toit and Etzebeth) can reach the ball is by swimming around the side of the maul illegally.

The ability of the Lions big men to seal their Bokke counterparts away from the ball and shift the point of attack was key to the first try on the comeback trail, at the start of the second half.

Any time the lineout receiver can turn around from his position ‘on point’ and face towards the opposition goal-line, it is a sure sign of success for the attacking side, and of failure for the defenders. 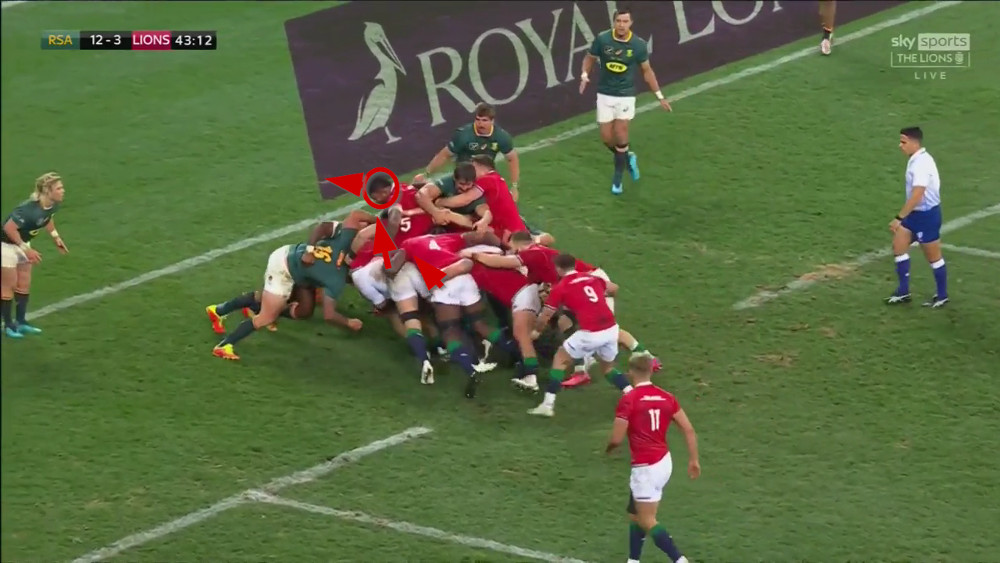 Despite the presence of an extra second row on the field for South Africa (Lood de Jager had replaced Siya Kolisi), Lawes has shed Etzebeth and spun in the direction of the drive, and he is at the sharp end of a triangle of power which makes the drive unstoppable.

Along with Jack Conan, Courtney Lawes was the Lions’ most potent forward ball-carrier. He carried eight times for 33 metres and seven of those carries were positive; one clean break, two defenders beaten and two offloads just for good measure.

Lawes’ footwork is so good that he nearly always takes an arm tackle and is able to fall forward in contact. That sets up an easy target for his support, and reduces the potential line-speed of the defence on next phase.

Seven of Lawes’ eight carries occurred in the second half, when the men in red enjoyed the Lion’s share of possession. In the first period with the Lions on defence, it was Maro Itoje’s turn to shine in the sun. He topped the forward tackle count with ten and dominated the post-tackle with four turnovers.

In the second example, Pieter-Steph Du Toit cannot handle Itoje one-on-one at the cleanout over the prone Kwagga Smith.

When it came Itoje’s turn to clean out one of the Springbok big men mano-a-mano, he did not miss.

Even though he initially has to go back to re-ruck over the top of Dan Biggar and there is a real opportunity for s Springbok turnover, there is no doubt about who wins the physical contest between Itoje and Etzebeth after they lock horns over the tackle ball. On the day, there was only one winner in the power stakes.

As the 1974 Springboks discovered, it is not easy to return from two years in the international wilderness and hit your straps as if you had never been away. Their successors in 2021 experienced something of the same bitter aftertaste in Cape Town on Saturday.

The Springboks thought they had two front rows who could provide an upward spiral of scrum dominance, but the flow of penalties went in the opposite direction.

They probably also counted on winning the battle of the big men in the second row and on the blindside flank, but found themselves on the wrong end of domination in the physical exchanges.

As in 1974, the British and Irish Lions were even able to survive a number of selection errors in comfort. On that tour, they had passed on the likes of Mike Gibson in the backs, and Derek Quinnell and Ray McLoughlin up front. It was not an issue on tour, because they had a much stronger core group of big men in the area of the team where it really mattered.

Likewise in 2021, they were able to overcome some obvious missteps in selection – the absence of Mako Vunipola and Kyle Sinckler in the front row, the pick of Elliot Daly at centre – because their choices at lock and blindside flanker performed so well.

Maro Itoje, Alun Wyn Jones and Courtney Lawes stood up to be counted, and if they can repeat the same quality of effort this weekend, South Africa will have a real problem on its hands.

If the Springboks cannot win the physical battle at scrum-time or in the lineout drive, they do not have too many other ways of winning the game.

It wasn’t pretty. Games with an average interval of one minute and 15 seconds between kicks out of hand rarely are. If they can kick and drive their way into the history books like their forebears 47 years ago, the 2021 Lions won’t be too worried about that.

If the Springboks lose again, Danie Craven’s fore-finger will be gesturing just a little more accusingly from his bronze perch in the grounds at Stellenbosch. Some of the 2021 Springboks may be glad that he is not still around to deliver a final judgement.

Without constant testing and exposure to challenges from without, you can never be sure of your values. It is as true in sport as it is in politics.

It happened to Australia in Super Rugby Trans-Tasman and in the series versus France, and now it is happening to South Africa on their home soil.