He was an idol of North Auckland fans back in the ’70s, who was one of the main reasons why 40,000 fans would cram into Okara Park, Whangarei. He helped North Auckland, or Northland as they are known now, to hold the Ranfurly Shield, which is unheard of today.

Super Sid was built low to the ground as many halfbacks are, with a muscular strength built up from tough farm work and a hard taskmaster father.

Sid’s battles with Gareth Edwards, the Welsh and British Irish Lions halfback, were legendary, with Super Sid coming out on top over their extensive careers, apart from the 1973 Barbarians versus All Blacks match where Edwards outplayed Going.

The bald Sid, with impressive sideboards, whose appearance was as rare as his rugby strengths, was a match winner, especially close to the opposition line.

A quick look over the top, the instinctive dummy and a quick, powerful surge to the line made him unstoppable. He was an all-round player with added skills of goal kicking, drop kicking and a fierce competitive streak, making him one of North Auckland’s favourite sons. 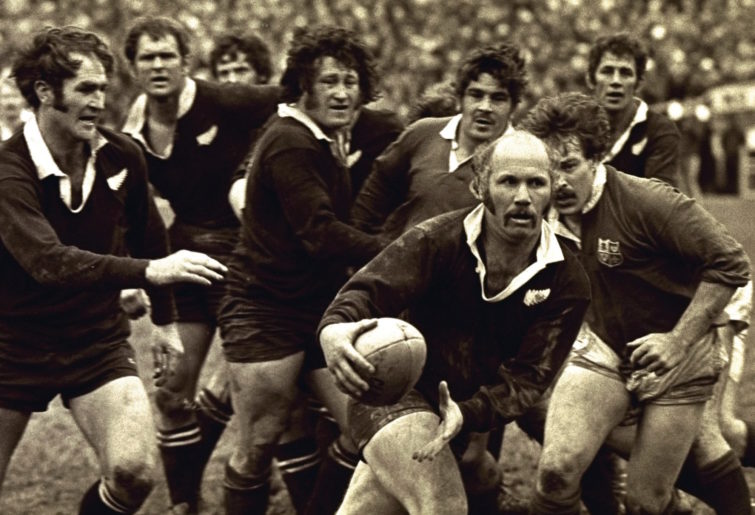 Scrumhalf Sid Going runs the ball for the All Blacks against the Lions. (Credit: Adrian Murrell/Allsport/Getty Images)

To the rest of New Zealand however, Sidney was not so widely appreciated, with fan-bases often calling for their hometown player to be in the All Blacks. When Chris Laidlaw was injured in 1967, Going was called into the All Blacks against Australia, and he seized the opportunity, then he was selected on the tour to Great Britain.

Laidlaw and Sid were two different players with Chris Laidlaw being a more technically correct halfback with a superior pass. He did not however possess Going’s running ability and match-winning capabilities.

A comparison would be a Frano Botica or Carlos Spencer up against Grant Fox. Sid’s style of play suited the forward dominance of the All Blacks with Ian Kirkpatrick and Alex Wylie as his allies.

It was often cited that the outside backs in the All Blacks were starved of possession when Sid was playing, but I would suggest many of these backs were not match-winning players in the white-hot intensity of a Test match. A bookie would maybe have better odds of Going scoring close to the line than the wingers.

Sid Going was born on August 19, 1943 in Kawakawa, Northland and was educated at Northland College and Church College of New Zealand. His rugby career began at the Mid Northern Rugby Club, and he came to the attention of legendary coach Ted Griffin, making his debut for Northland at the age of 18.

Due to his Mormon faith Sid then went to Canada for two years as a missionary for his church. Upon his return he claimed back his place in the North Auckland team and played for the New Zealand Māori.

In 1966 he was selected for an All Blacks trial, played for the North Island and for the NZ Māori against the British and Irish Lions. It was then that his big opportunity came when Laidlaw was injured, and Sid began his illustrious All Blacks career.

Sid Going played 43 matches for North Auckland over 16 years and built up a magical relationship with his two brothers, Ken, and Brian. Sid had an aggressive running style and added in ‘reverse passes’ to his first-five brother, Brian.

But one of the most magical sights I have seen in all rugby was the Going brothers’ famous triple-scissors move. Watching from the large bank at Okara Park and admiring this move is unforgettable, you had no idea who had the ball or who it was going to.

I’m surprised teams have not tried to replicate this move, but maybe it needed the intuition of three brothers. The late Ken Going often called the play from fullback when he saw the opportunity to pull it from the hat. Ken went on to play for the All Blacks in 1974 and Brian represented the North Island and NZ Māori.

Sid played 29 Tests for the All Blacks from 1967 to 1977, playing his last Test against the Lions after the second Test, replaced by Lyn Davis, who like Laidlaw was viewed as a better passer than Sid.

Some of his highlights include captaining the All Blacks on five occasions, scoring 33 tries, 18 conversions, five penalties and a dropped goal in first class rugby and touring South Africa in 1970 and ’76. He even took over goal-kicking duties in 1976 when stocks became low.

In 1970 he was made an ‘honorary white’ along with Bryan Williams to enable him to play in South Africa. Sid played for the NZ Māori over 12 years, captaining them and being awarded the Tom French Cup on three occasions for outstanding player.

Super Sid retired from first class rugby in 1978, and coached Northland from 1993-96. He was made a Member of the Order of the British Empire for services to rugby in 1977 and was inducted into the NZ Rugby Hall of Fame in 2020.

It is difficult to analyse why certain players become your rugby heroes. I am a Going fan rather than a Laidlaw supporter. What is it about them that grabs you and you want to replicate if you are a player?

As with Bryan Williams there are parts of Sid’s game that young players want to copy: his reverse passes, running ability and ferocious competitiveness are characteristics to be followed.

I guess I admire players who play with a free spirit and who express themselves. They are not compliant, technically correct, robotic players.

Williams sidestepping in the in-goal area is an example of a player not following the rules! It is what I am like really, wanting freedom rather than officious ruling, so naturally I follow players for their uncommon abilities.

Sid was one of the most unique players to play for the All Blacks, whom many have not been able to copy since. He ranks as one of our most legendary All Blacks despite his share of critics. A devastating runner, inspirational player, and typical modest, humble Kiwi.