The protest Games: Tokyo 2020 draws to a close against the backdrop of a changing world

Tokyo 2020 will always be remembered as the Olympic Games which battled a pandemic, time delays, as well as the absence of crowds.

This Games, though, has delivered like Games of the past. Both individual and team efforts which will live long in the memory despite the obvious challenges.

Tokyo 2020 will also be highlighted by the social and political backdrop which surrounded the 17 days of elite competition.

The ongoing global battle against coronavirus was showcased through the inability of crowds to attend these Olympics while the athletes were required to follow strict protocols.

Host country Japan, meanwhile, faced its own battle against a deadly second-wave of coronavirus, with the nation on track to hit 15,000 cases per day.

This culminated in an Olympics which for many people and especially for the citizens of Japan sat uncomfortably in its construction and running over the 17 days.

This Olympics, like many global sporting events, provided a platform for athletes and teams to voice their opinions and showcase their support for social and political change.

The Olympics has traditionally not allowed any type of political protests as stated in Rule 50.2 of the Olympic charter, “No kind of demonstration or political, religious or racial propaganda is permitted in any Olympic sites, venues or other areas”.

However, this rule was relaxed by the International Olympic Committee in the lead-up to Tokyo 2020 with the athletes allowed to express their political views in interviews with the press, social media channels and on the field of play prior to competition.

Teams kneeling before kick-off has become one of the most recognised and powerful symbols of the collective coming together to help eradicate racism.

This was evident in Tokyo wherein countries united in their fight against racism by kneeling before kick-off, including the British and U.S. women’s football teams. 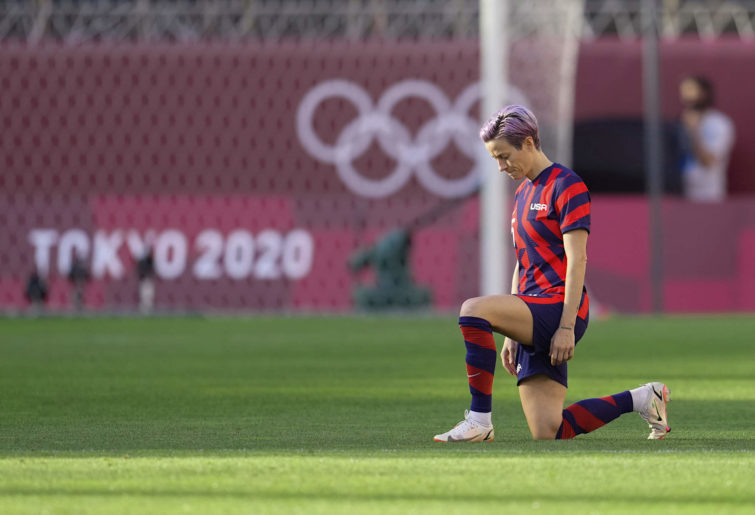 Like many individuals and teams that threaten to question and stand up for social change, criticism seems never too far away, though.

The Matildas experienced this criticism for their decision to pose with the Aboriginal flag – one of Australia’s three official flags – instead of the Australian flag before their opening group game against New Zealand.

Predictably, social media was abuzz, criticising the team for not representing Australia and instead dividing the country with the choice of flag they chose to pose with.

Conservatives were also quick to highlight this divide, including One Nation leader Pauline Hanson, who stated, “The Matildas should stick to playing soccer and represent all Australians at the Tokyo Olympics.”

Matildas star Sam Kerr explained the process and said the team wanted to do something different in highlighting the issue of division, while allowing the Indigenous girls to drive the action.

This issue of division though seems something of a hypocrisy when it comes to Australia’s First Nations people who, ever since white settlement, have never really felt part of the collective fabric of this nation and to this day, are not mentioned in the Constitution.

U.S. silver medal-winning shot putter Raven Saunders used her platform when presented with her medal as she raised her hand in an ‘X’ formation above her head.

Much like The Matildas, Saunders received criticism from many parts of the American media, including conservative news network Fox News, while the IOC eventually suspended its investigation into whether Saunders had crossed the line in the manner of her political statement.

Saunders double-downed on her stance by later tweeting, “Let them try and take this medal. I’m running across the borders even though I can’t swim,” as she responded to the IOC’s investigation.

U.S. gymnast Simone Biles was one of Saunders’ biggest supporters with the issue of mental health particularly relevant in Biles’ Olympic campaign.

The criticism which was directed towards Saunders again centred around her lack of appreciation for the privilege of representing her country and that politics and sport should not be mixed.

The common notion that because you are representing your country, speaking out against injustices that exist should not occur seemingly does not align with freedom of speech.

Powerful platforms such as the Olympics need to be used to raise these important social issues as long as it is done peacefully and in a non-threatening way.

Critics of these platforms which are used to raise social awareness emphasise the exact reason it is important for athletes to feel empowered to speak up about injustices.

The uncomfortable conversation that needs to be acknowledged by many of these political statements is one we cannot keep hiding or denying exist.

Tokyo 2020 has provided many powerful images.

One image I believe stands above the rest was of the Boomers posing with all three official flags of Australia after they won the bronze medal match against Slovenia. The team was led by proud Indigenous man Patty Mills who was also Australia’s first Indigenous flag bearer.

This image showed the collective spirit which can be forged through sport regardless of race, religion or beliefs.

Australia is a multicultural country with a rich Indigenous history which needs to be celebrated and represented proudly.

The question though needs to be asked: if The Matildas posed with the Australian flag, would we have heard criticism of them not representing the Indigenous people of Australia?