Rugby Australia chief executive Andy Marinos claims he was blindsided by New Zealand counterpart Mark Robinson as the fallout began over the decision not to send the All Blacks to Perth for Bledisloe 3.

“It’s incredibly disappointing to be informed of this decision via the media, despite having a conversation with the CEO moments before and there no mention that this was the intention,” Marinos said in a scathing statement released by Rugby Australia.

SANZAAR, the body that governs The Rugby Championship, also expressed disappointment over New Zealand’s decision while Wallabies coach Dave Rennie, in Perth with the Australian team, was furious.

“Bloody angry,” Rennie, a New Zealander, told reporters when asked for his reaction.

“I think it’s disappointing how it has been communicated. Our boys all found out through social media.

“I thought New Zealand Rugby didn’t even have the respect to consult RA about their decision so that’s hugely disappointing.

“We made a commitment to play a Test in Auckland on the 7th of August and while we had players away from home for six weeks already out of NSW, we honoured that commitment.

“They asked to play an extra game because we couldn’t go back to Wellington on the 28th and we honoured that as well.

“They made a commitment to come on the 21st which was pushed back to the 28th and now they are not coming.

“If they are playing the welfare card, well our New South Wales boys haven’t been home for eight weeks already with no clear end in sight and likelihood they won’t get home until late November to then be in quarantine.

“I feel like there’s only one of us doing what’s in the best interest of the game.

“Last year, we want to NZ to ensure the games were played for the benefits of both countries. We quarantined in Wellington for two weeks. The expectation was we made a commitment to go there this year, they’d come here and they haven’t honoured.

“It tells you more about them than us I reckon.” 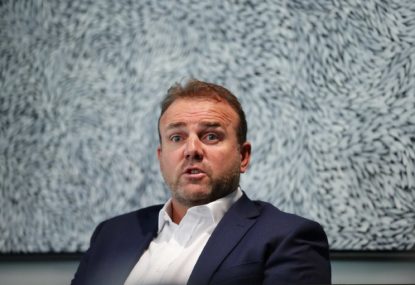 Marinos was clearly angered by the NZR approach, especially in light of the Wallabies’ decision to travel to New Zealand and play back to back matches at Eden Park, in a change to the original schedule.

Fox Sports reported New Zealand had set Australia a midday deadline Friday for a plan of action on where the remaining games would be hosted, with Queensland an option.

They reported that Australia asked for a three hour delay, only to be surprised by the NZR announcement.

“I would also like to thank the Wallaby team and management for their continued sacrifice, compromise and willingness to ensure Test matches get played,” said Marinos.

“The team has been in camp since the end of June and jumped on a plane at the end of July to go to New Zealand with no certainty as to what the Test schedule will look like, or when they would be home.”

“The news of the cancellation of the O’Reilly Cup Tests is equally as disappointing for our Wallaroos, who were ready to play their first Test of the year,” Marinos said.

“We will continue to leave no stone unturned in finding an option for our Wallaroos as well as the Perth Test.

“Australia has proven its ability to host International Rugby in the current climate, and it is something we will continue to work towards.”

The statement added that Rugby Australia is continuing to work with its SANZAAR joint venture partners regarding the schedule for the Rugby Championship this year.

SANZAAR released its own statement which criticised the New Zealand decision.

Here is the SANZAAR statement in full

The ongoing impact of the pandemic, and the latest outbreaks of COVID-19 in Australia and New Zealand, has led to the tightening of regulations placed on travel and quarantine by various state and national governments. This has caused massive disruption to the match schedule for The Rugby Championship.

However, SANZAAR is currently working night and day with all stakeholders, and the tournaments’ associated commercial partners and rights-holding broadcasters, to find a suitable solution for the remaining matches. This also involves talks with the various government departments and health authorities to determine if suitable travel, accommodation and quarantine regulations can be implemented to allow the tournament to proceed in Australia.

SANZAAR is very disappointed that the New Zealand Rugby Union has made the decision not to travel to Perth at this time to play Australia for its second-round match [and Third Bledisloe match]. However, SANZAAR and the other national unions will continue to work on when and where this match can be played as part of the overall rescheduling work being done. SANZAAR also recognises that this decision is incredibly disappointing for rugby fans in Perth.

The other second-round match, South Africa versus Argentina, scheduled for Saturday 21 August in Port Elizabeth will take place as scheduled. SANZAAR will announce the details of the venues and dates of the remaining nine matches when appropriate and will not enter into speculation until then.

Earlier NZR relased its own statement. Here it is in full.

New Zealand Rugby (NZR) has announced the All Blacks’ two home Fortinet Rugby Championship Tests against South Africa and the Black Ferns two O’Reilly Cup Tests against the Wallaroos will not be played in New Zealand.

The decision follows advice from Government that the Springboks and Wallaroos would not be able to enter New Zealand to play the matches due to COVID-19 travel restrictions.

NZR has also confirmed that, given the current uncertainty over The Rugby Championship schedule, it has made the decision not to send the All Blacks to Perth this weekend for the third Bledisloe Cup Test which was scheduled to be played at Optus Stadium on Saturday 28 August.

Ticket holders for the matches in Auckland and Dunedin will receive a full refund and will be contacted by the respective ticket providers in due course – Ticketek for Forysth Barr Stadium, and Ticketmaster for Eden Park.

New Zealand Rugby CEO Mark Robinson said every effort had been made to keep the two Tests in New Zealand.

“We share the disappointment of our fans, players and other stakeholders, particularly those in Dunedin where the sold-out 100th Test between the All Blacks and South Africa was shaping up as a very special occasion.

“However, after discussions with Government, it is clear that the COVID-19 travel restrictions meant there was no way of bringing the South African and Wallaroos squads into New Zealand and we understand the importance of putting the health and safety of New Zealanders first.

Speaking on the decision to not have the All Blacks travel to Perth this weekend, Robinson said:

“Without complete certainty on the team’s next movements around The Rugby Championship we felt it was prudent for the team to stay put in New Zealand until SANZAAR have announced the full tournament schedule.

“Once the team leaves our shores, they currently can’t return until November 23 post their Northern Tour, so given the uncertainty, it makes sense to pause and get more clarity on these fixtures.

“We remain 100 percent committed to playing in the entire Fortinet Rugby Championship in 2021 and are working closely with SANZAAR to look at a range of options to reschedule these important matches.”

SANZAAR would make further announcements around the Rugby Championship schedule in due course.