The 2020 wooden spooners had a considerably better year in 2021, but they did fall away at the end.

You all know the routine thus far: we will go through what worked for the Crows, what failed, the questions that remain and where the improvements will come from in 2022.

Adelaide’s season was an inconsistent one filled with some very high highs and some very low lows. They started with a bang, surprising Geelong in what can only be described as a punch-to-the-mouth-style game in which the young Crows applied manic pressure, and finished with a positive win over their fellow lower table brethren the Kangaroos.

Pidgeot in the guts
Ben Keays is affectionately known as Pidgeot for the blond mane he was sporting in season 2020, making him look like a Pokémon. He took a massive step forward in the absence of the Crouch brothers and the ageing Rory Sloane, averaging elite for kicks (15.4), tackles (six) and pressure acts (24.5) while also being above average for total disposals (28.1), metres gained (421.6), score involvements (5.7), goals (0.5) and clearances (5.5).

He has gone from the Brisbane Lions as a delisted free agent to the Adelaide Crows with their selection in the 2019 preseason draft. The only mark you can put against him is his tendency to dispose of the ball poorly.

Joining Pidgeot in the middle was Rory Laird and Paul Seedsman, who both became very effective aggregators of the ball. Laird has become one of those rare players who has won two best and fairest medals, and he did it in two different positions. Seedsman has also been excellent since coming over from Collingwood, and 2021 has been his best campaign yet, being elite for metres gained and kicks, both of which are vital indicators to his wing and outside midfield position. 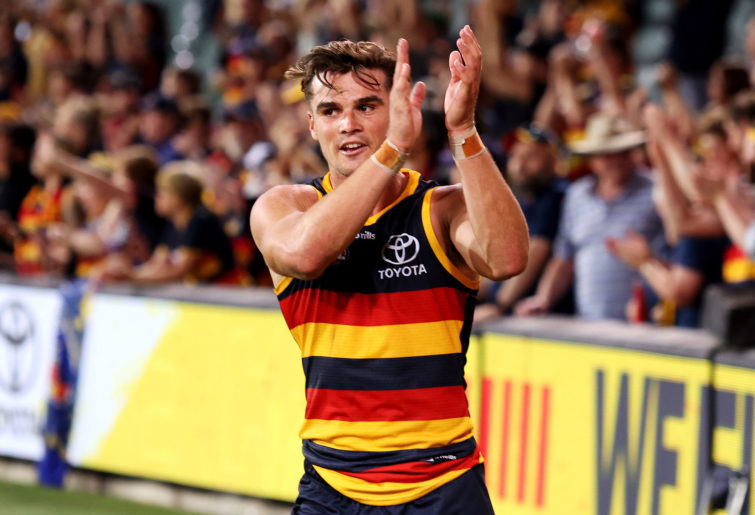 Underrated young guns
The Crows took a decidedly South Australian focus in last year’s draft, picking Riley Thilthorpe (Pick 2), Luke Pedlar (Pick 11), Brayden Cook (Pick 25) and James Rowe (Pick 38), all of whom hail from SA. The only selection from outside of the state was Sam Berry from the Gippsland. The selections at the draft have enabled the Crows to begin to develop a good young core that they’ve frequently been missing. Thilthorpe, aka Thilthorpedo, has been particularly good, with 18 goals, including five goals on debut, from his 14 matches this year. Sam Rowe has also shown to be an astute selection at the small forward position, chiming in for 15 goals across the season.

If you also consider the other draft classes of talent they have coming through, a pattern begins to emerge of the Crows quietly building one of the best young cores around. Jordon Butts is proving to be a very good tall defender, frequently shutting down the opposition’s best forward, and while he may find himself on the end of some hidings, all good key defenders do in their early years. Most prominent among their young jets are Tom Doedee and Lachlan Sholl, who have been forming an effective partnership on the halfback line.

Finally, there’s Lachlan Schoenberg, who has made his name as a tagging midfielder while getting his own possessions. He has been a great find for the Crows and was able to apply the clamps to some of the best midfielders, like Darcy Parish. Thanks to the shrewd drafting of the Crows, they can afford to comfortably move on stalwarts of the club like Tom Lynch and Daniel Talia. 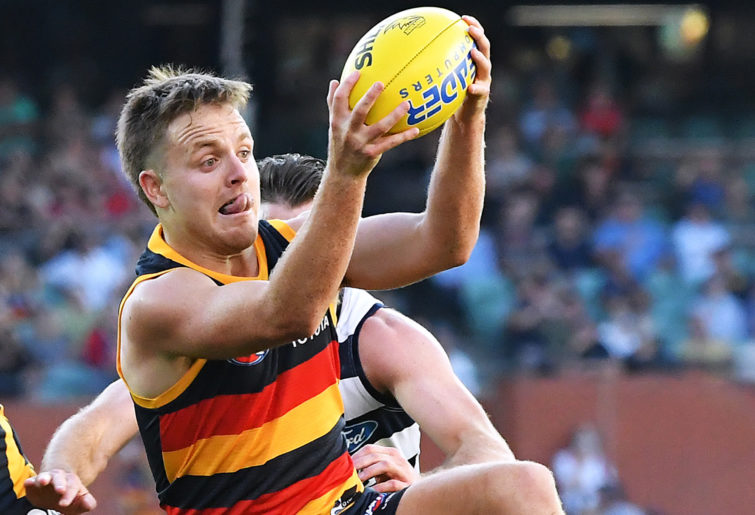 Taylor Walker
Yes, he played good footy, and some would argue that all indiscretions he made after this are secondary. However, the remarks he made regarding Indigenous footballer Robbie Young are completely unacceptable. When you take into consideration the horrendous camp the Crows had in 2018, this appears like the latest in a series of events that have had the side appearing insensitive to Aboriginal player welfare.

Taylor Walker brought the trauma of that camp roaring back with his remarks on Young. I want to commend the unnamed Adelaide staffer who named Walker as the guilty party despite the immense personal cost that he may have incurred. I think the punishment is not good enough, but Walker should be given the opportunity to restore the faith of the community in him as a role model and work towards reconciliation with Young.

Walker-or-bust scoring mentality
The other aspect of the Taylor Walker suspension that needs to be considered is even at 32 he is still vitally important to the Crows structurally. He led goals (48), marks inside 50 (44) and shots on goal (90) and was second for score involvements (132) despite missing the last three games of the season due to his suspension. Walker is the primary conduit through which the Adelaide forward line is able to score, and with the delisting of Tom Lynch as well as the nascent development of Riley Thilthorpe, they’re not yet ready to be without Walker.

Finally, Walker’s presence also obscured what was a dire circumstance for the Crows with regard to scoring, as they ranked last for goals, with just 116 majors. I suppose this could be a blessing in disguise, as I fervently believe that Walker should be given the opportunity to show that he has learnt from his indiscretions and can retire knowing he gave everything he had to the Adelaide Football Club.

Ball control
The Crows were completely unable to control the ball, ranking last for marks (59 per game) and second last for total disposals (282.7 on average). This indicates to me that Adelaide are having trouble getting their hands on the ball and relying on too few to do the work of many. This shows up in how they conceded the second most scores of any side in the competition this year, and they were the worst side in the competition come the second half of the year as North steadily improved.

If Matthew Nicks is to take this side up the ladder, he needs to work on getting his hands on the ball more frequently as well as ensuring his side can dispose of it effectively. With the enforced absence of Taylor Walker, he has a viable opportunity to do so by developing the mercurial talents of Shane McAdam, who has been a live wire up front for them, as well as working on good ball use on the outside by developing players like Brayden Cook and Lachlan Sholl. 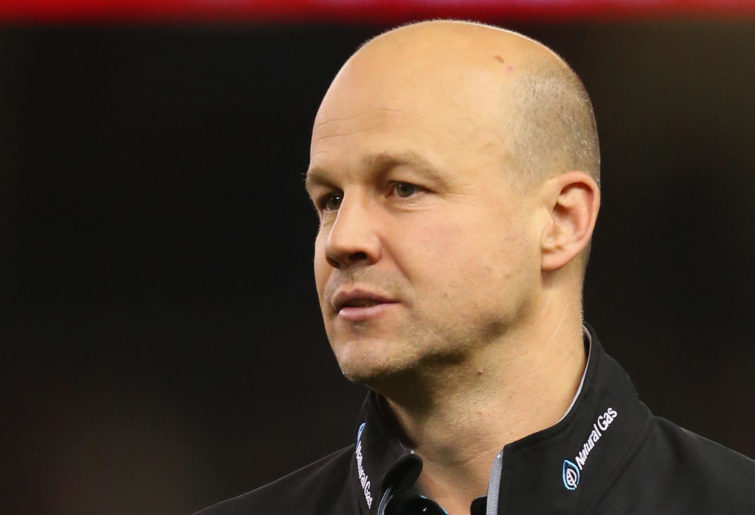 What do the Crows need to improve?

Get their hands on Jason Horne Francis
A continuation of one of the things I mentioned about the Crows was their ability to draft good talent from their native state. Horne Francis represents a solid change to the Crows midfield, where he can score goals as well as accumulate the ball. I am not saying this will be easy – they will need to make a godfather offer for North Melbourne’s Pick 1.

If not Horne Francis, they need to split their first-round picks and get as many good players as possible. I am thinking Nasiah Wanganeen-Milera and Arlo Draper, both of whom are outside midfielders with fantastic disposal by foot. The other aspect is they’re relatively tall, standing 187 and 186 centimetres respectively, making them great options in the air. They’re also from South Australia, thus reducing the likelihood of a go-home trade like we saw with Lachie Neale recently.

Make a godfather offer for Lukosius
Jack Lukosius has been an absolute jet for his whole career. To prize him out of the Suns will require a near impossible offer for them to match, but by getting him the Crows would instantly become a side that can contend for the top eight. This is an example of what they should do, not what they will do. I am completely uncertain about what will get the deal done, but it will have to be more than draft picks, and the Crows have the curse of not having a lot of mature talent that they can offer the Suns for their talismanic utility.

Best win: Round 1 against Geelong
The Crows roared out of the gates in the first round of the season by beating Geelong by 12 points. It was a huge return to form for Taylor Walker, who scored six goals as he wound back the clock. They made the aged Cats look slow and well-aged. It was a part of an opening month for the Crows that had the footballing world abuzz with what they could potentially come at the end of the season, though they were unable to do anything.

Best and fairest: Rory Laird
Laird become a deserved best and fairest winner, the second medal of his career and a medal earnt in a different position. He averaged 32 disposals, 6.8 clearances and 14.8 contested possessions, all of which are elite for inside midfielders. He provides vital relief to a midfield missing Matt Crouch for the entire year and burdened by an ageing Rory Sloane.

Letter grade: F
They started the season well but fell in a heap towards the end. People may think this is a little harsh, but they were deserving of this grade and have critical shortcomings in their game that desperately need to be fixed.

Way too early prediction for 2022: 12th to 18th
The Crows still need to fix issues about their game style, particularly with their reliance Taylor Walker, for much of their scoring, I expect that Riley Thilthorpe will take a couple of steps forwards but not enough to account for the continued decline of Walker and the added pressure of him being under the microscope. Hence they may move forward, but they could also decline further.

What do you think? Will the Crows build on the positive changes they’ve made this year? Or will they perpetually relitigate the past? Only time will tell. Tune in tomorrow for my piece on the Carlton Blues.