Quade Cooper’s performance in an hour long trial match between fringe Wallabies and Western Force last Saturday has convinced Dave Rennie to bring him back to Test rugby for the first time since 2017.

Cooper, the biggest name in the sport in Australia, will win his 71st cap against the Springboks in The Rugby Championship showdown on Sunday night, after Rennie had resisted calling him up for the three Bledisloe Cup matches.

The coach revealed that Cooper and other unused squad members got a chance to show their worth against the Force the day before Bledisloe 3, where Wallabies incumbent No.10 Noah Lolesio struggled to make an impact.

“We had a hit out against the Force last week and anyone who wasn’t in the 23 played in the game,” Rennie told a press conference on Friday.

“That was a 60 minute hit out and Quade played all 60 minutes of that, and was really strong. So it gives us confidence for Sunday.

“I know he’s really excited. I imagine he’ll be anxious going into the game, his first Test in a long time, but we bought him in to give us a bit of cover and depth and he’s earned the right to play.”

Here are Rennie’s views on the hot selection topics 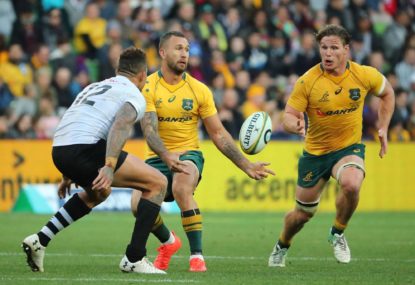 On why he went for Cooper

“He’s the best option,” said Rennie simply. “He has been with us around four weeks, was training really well and we felt we still need more balance to our game. He’s got the skill set to deliver that whether it’s by hand or through his boot.

“There is certainly no panic. We’re basing selections on what we see. Some selections are based on recent Test matches, and for Quade it’s been training.

“He was very close to selection last week and got the nod this week.

“We’re picking the guy who we think can do the best job for us, based on the cattle we’ve got. He’s certainly earnt it.

“I can’t speak highly enough of him. We had a good chat prior to him coming in. I guess a lot of my knowledge of Quade was what I read in the paper previously, but he’s been outstanding.

“We’re picking him on what we know and what we see.”

Rennie first came across Cooper when the flyhalf was playing for Queensland Reds and Rennie was the successful coach of the Chiefs in Super Rugby.

“His ability to make smart decisions really stood out.

“I know he was public enemy number one for a long time from the All Blacks supporters but I always had a lot of respect for his skill set.

“I’ve got to know him really well over the last few weeks. He’s grown up, he’s matured, he’s desperate for another opportunity and we look forward to seeing him with the jersey on again on the weekend.

“He’s got an arm around some young guys and we couldn’t be happier with him. He’s had another good morning this morning and we’re expecting him to put that on the park on the weekend.”

On the claims of James O’Connor and Lolesio

“James O’Connor’s not too far away from a return, he will be back in the next week or two,” said Rennie.

“Noah – I’m not sure about low on confidence – but he was a bit disappointed with last weekend,” Rennie said.

“We had a number of opportunities to nudge in behind them and he’s still growing his game management. I think it’s an opportunity for him to sit back, take stock and certainly give him some time to reflect.

“We rate him highlyand that’s the reason he’s started so many Tests. It’s a chance for him to clear the head a little bit. We’ve got four Tests in quick succession coming up and he’s desperate to be better.

“We’ve gone through his game in detail again this week and he’s learning quickly. It’s a chance to sit back and watch how other guys operate this week.”

Fullback Banks has been criticised for his recent performances and Rennie was asked by reporter what they were missing in judging Banks’ game.

“We’re probably seeing something you’re not seeing,” Rennie said. “Tom, throughout the French series and the early All Blacks games, was really strong – very good under the high ball, got a smart kicking game.

“He’s got good gas. He’s probably at his best when he’s hovering around 10, and looking for opportunities around the ruck.

“We obviously want to see as much ball in his hands as possible. We’ve talked a lot about getting him in at first receiver on short sides and he’s starting to pop up here. We rate him. He’s a good man and an important part of our team.”

Rennie said there was “a huge amount of discussion around Hodgey as well as an option at 10”.

“I’m not going to divulge all the reasons why [he wasn’t chosen] because we don’t want to tip our hat to South Africa, but he was he was very much in the selection frame and it’s the reason he’s on the bench.

“He fills holes all over the place and maybe that’s his frustration. He’s Mr Fixit and he’s played just about every position outside of 10 this year. I know he’s keen to pin down a spot and he’s certainly applying pressure.”

“He’s been phenomenal,” Rennie said. “I think his form has been outstanding in a losing team, just as his work ethic.

“I’ve coached a lot of people around the world and I’ve never seen anyone who trains as hard and plays as hard as he does. If you had 15 Michael Hoopers out there you’re pretty tough to beat.

“He’s done a really good job, really grown his leadership and has a huge amount of respect within the group and he delivers on what he demands of others. It’s a hell of an achievement from him.”

On Angus Bell starting ahead of James Slipper

“Slips has a different role this week,” Rennie said. “He’s played a lot of footy, could well give us a bit of tight head cover when Allan Alaalatoa leaves so we’re keen to give him time off the bench. Belly has been excellent – his ball carrying gives us a point of difference.” Alaalatoa will leave the team after this game to return to Canberra for the birth of a child.

On the debutants
Darcy Swain has a minor foot injury and misses out, allowing Izack Rodda to start and Rob Leota to make a matchday squad for the first time.

Also making a debut on the bench is Feleti Kaitu’u. “He’s a bigger body from a hooking perspective, which we think will be important against a big Springbok pack,” Rennie said. “Credit to him. He’s had long term injury, he’s worked really hard to get it right.”

On the Springboks team

“Pretty predictable – pretty close to the side that played against the Lions,” said Rennie. “They’re incredibly strong and huge, very physical, so we know what’s coming based on their selection there a 6-2 (forwards-backs bench) split speaks volumes.

“If we just get into a straight arm wrestle with the Boks they’re tough to beat. They’re a very good defensive side, got a solid kicking game and are happy to play without the ball. We’ll get plenty of ball in our hands and how we use it is going to be important.”