After 198 regular season matches, 1,188 Brownlow Medal votes, 4,575 regular season goals (and a further 172 goals in the finals series) and another season impacted by COVID-19, we have finally, very nearly, reached the end of the road.

Only one match is left to be played in this season and it’ll be to decide the AFL premiers for season 2021.

Around 60,000 fans are expected to pack Optus Stadium for the twilight grand final between Melbourne and the Western Bulldogs, with the showpiece match forced out of Victoria for the second consecutive year due to yet another COVID-19 lockdown in the state.

Once again, the decider will be an all-Victorian affair, while it’s also the first since 2010 to feature two sides from metropolitan Melbourne, when Collingwood defeated St Kilda by 56 points in the replay after the initial match ended in a 68-all draw.

In one corner you have the Melbourne Football Club, which has endured a 57-year premiership drought and whose on-and-off-field struggles in the intervention is well documented.

After their 12th and most recent flag in 1964, the club was thrown into turmoil the following year when legendary coach Norm Smith was sacked after Round 13, only to be reinstated almost immediately after.

The club would not return to the finals again until 1987, and while they would reach grand finals in 1988 and 2000, they’d be on the receiving end of masterclasses from Hawthorn by 96 points, and Essendon by 60 points, respectively.

A proposal to merge the club with the Hawks at the end of the 1996 season was also mooted, but was ultimately voted against by members of both clubs.

In modern times, Neale Daniher did his best to keep the club afloat both on and off the field in the noughties, but the lack of success saw him moved on midway through the 2007 season.

There were also the tumultuous Dean Bailey and Mark Neeld eras, during which the club struggled badly on the field with the nadir coming in Round 19, 2011 when the club suffered a near-record 186-point loss at the hands of the Geelong Cats at Kardinia Park.

That result meant the Dees laid claim to the two worst losing margins in VFL/AFL history, having also lost to Fitzroy by 190 points in Round 17, 1979.

The club was also investigated for tanking, while supposed saviours such as Jack Watts, Jack Trengove and Tom Scully, among others, could not lift the club out of the doldrums.

The hirings of ex-Essendon CEO Peter Jackson and ex-Sydney Swans premiership coach Paul Roos helped to restore some stability on and off the field, and while on-field success was still intermittent the foundations were being laid for where the club finds itself now.

Going into this season, Simon Goodwin found himself under the pump after the club missed finals for the past two years following a 2018 season in which they reached the preliminary final only to be beaten by the West Coast Eagles by 66 points in Perth.

The club won their first nine matches of the season, marking its best start to a season since 1956, before suffering a heartbreaking and controversial one-point loss to the Adelaide Crows at the Oval in Round 10.

Despite some mid-season stumbles, including a loss to lowly Collingwood in the Queen’s Birthday match at the MCG and a draw against Hawthorn in Round 18, the club finished on top of the ladder for the first time since 1964 but did so in the most dramatic fashion possible. 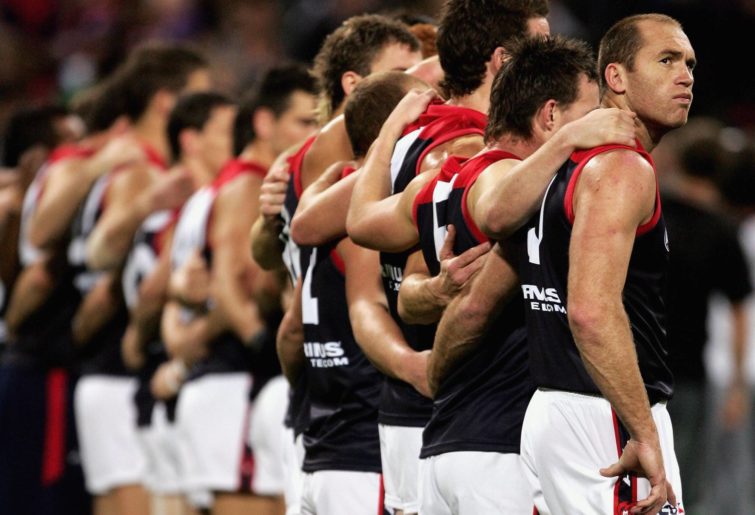 In their final round clash against the Geelong Cats at Kardinia Park, they came from 44 points down midway through the third quarter to win by four points, with Max Gawn slotting the match-winning goal after the final siren.

Subsequent wins over the Brisbane Lions and Cats in the qualifying and preliminary finals, respectively, advanced the club to its first grand final since 2000, where they will have the chance to end the AFL’s longest active premiership drought of 57 years.

Opposing them will be the Western Bulldogs, who will be aiming to re-emulate their own piece of history after winning four consecutive sudden death finals matches, including two on the road against the West Coast Eagles and GWS Giants, to claim their second flag in 2016.

Luke Beveridge’s side won their first six matches of the season, and were on track to claim the coveted double chance until things appeared to take a turn for the worse when leading goalkicker Josh Bruce suffered the dreaded ACL injury against Essendon in Round 21.

The Bulldogs lost that match, and also went down to Hawthorn and Port Adelaide meaning they had to settle for fifth place on the ladder.

Despite suggestions that the late-season form slump could translate into a third consecutive early exit from finals, the Dogs reversed their loss to the Bombers with a win in the elimination final, ensuring the men from Windy Hill remain without a finals win for 17 years.

A thrilling semi-final win over the Brisbane Lions at the Gabba, in which Laitham Vandermeer knocked over the match-winning point with a minute remaining, advanced them to a final four showdown against Port Adelaide at the Oval.

With their rediscovered form from the early part of the regular season, they then unleashed on the Power, winning by 71 points to book their place in just their fourth grand final, and second in six years.

When the two teams take to the field at Optus Stadium this Saturday night it will be exactly 67 years to the day since the teams last met in a grand final, having previously fought it out for the flag in 1954.

On that occasion, a seven-goal haul from Jack Collins saw the Scraggers win their first flag; little did the Footscray supporters know that they would have to wait another 62 years for the club to return to the premiership dais.

Which is why, when the club won the 2016 premiership, never-ending celebrations went off in the streets of Melbourne’s western suburbs as the current generation of Bulldogs supporters savoured the ultimate success, most (if not all) of them having not been around in 1954.

From the Bulldogs’ team that thrashed Port Adelaide in the preliminary final over a week ago, nine players – among them Marcus Bontempelli, Easton Wood and Jason Johannisen – have the chance to become the first dual premiership players in Footscray history.

Taylor Duryea has the chance to become a triple-premiership player, having played in Hawthorn’s 2014 and 2015 flags, while for Adam Treloar this will be the second grand final he plays after being part of the Collingwood team that lost to the West Coast Eagles in 2018. 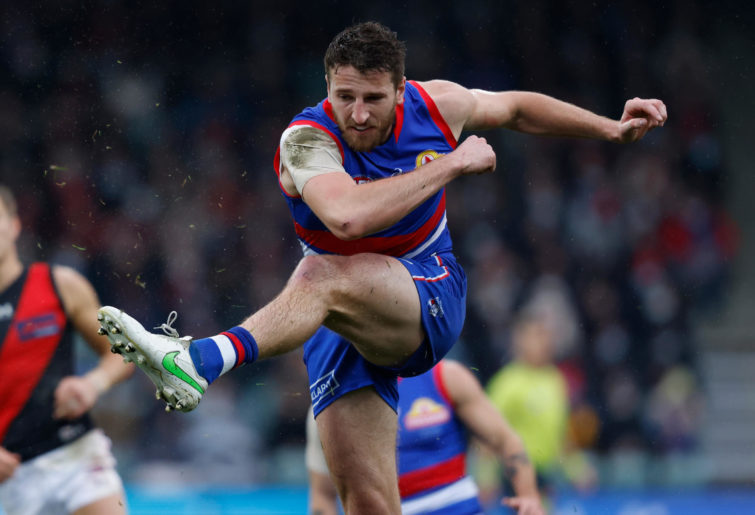 In contrast to the Western Bulldogs’ recent premiership experience, Melbourne only has one player from its preliminary final side that has previously played in a grand final, and no previous premiership players.

That player is Jake Lever, who played in the Adelaide Crows’ grand final loss to Richmond in 2017, in what turned out to be his last game for the club before he moved to Melbourne at the start of the 2018 season.

As is the case this year with the Dees having won the minor premiership, Lever was part of a Crows side that dominated the regular season and finished first on the ladder, only for the men from West Lakes to suffer stage fright in the biggest match of the year.

The hard luck story to come out of Melbourne’s first grand final qualification in 21 years is Nathan Jones, who made his debut in late-2006 and by his eighth AFL game had already played two finals, only to then play just three more in 294 subsequent matches.

Jones remained loyal to the red and blue and led the club by example during the worst period of on-field results, before bringing up his 300th game against Richmond in Round 6 this season.

Since then he has not been able to break back into the side, though he was named as the medical sub on two occasions, the most recent in Round 15 against Essendon.

After the Dees won their preliminary final against the Cats, Jones received news of the imminent birth of his twins, and so flew back to Melbourne, giving up the opportunity to potentially be part of a premiership side in the process.

The 33-year-old has since announced his retirement, so while he won’t be part of grand final glory he will at least be remembered for doing all he could to return the club to where it deserves to be – fighting it out for a flag at Optus Stadium this Saturday night.

Just like the Bulldogs did in 2016 when they dedicated their premiership triumph to Bob Murphy, who earlier that year suffered a heartbreaking ACL injury against Hawthorn in Round 3, there’s no doubt the Dees would love to dedicate their flag to Jones, if they are victorious. 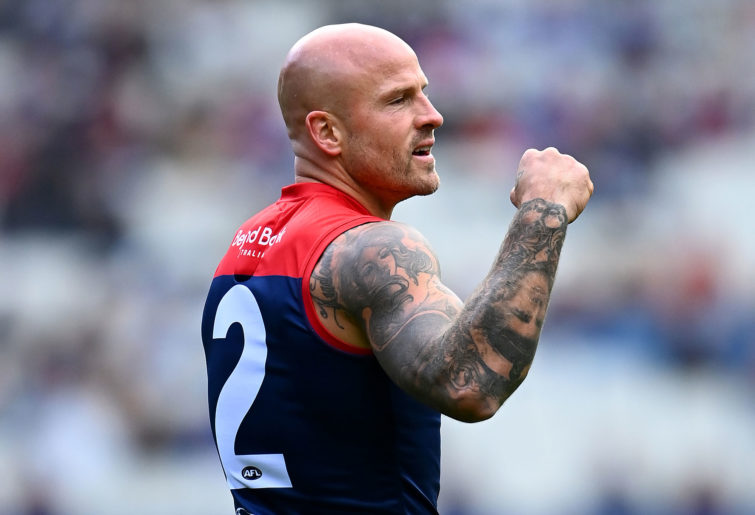 It would also be the ultimate reward to the club’s legion of long-suffering fans who stuck by them during the toughest of times, ranging from Norm Smith’s sacking to two record defeats in 1979 and 2011 to the constant on-and-off field instability this century.

Of course, the Bulldogs can relate, as their 2016 premiership win put an end to a 62-year period in which they too were plagued by speculation surrounding its future as well as a prolonged period of limited success both on and off the field.

The two teams met twice during the regular season, with Melbourne handing the Bulldogs their worst defeat of the season with a 28-point win at Marvel Stadium in round eleven, before the Scraggers returned serve with a 20-point win at the MCG in Round 19.

Both of those matches were played in front of empty stands, due to separate COVID-19 outbreaks sending the state into lockdown. Therefore, this Saturday’s decider at Optus Stadium will be the only time the two sides this year that they face each other in the flesh with a crowd in attendance.

Regardless of who wins, there is bound to be a fairytale winner, and it will bring so much joy to the millions of Victorians who are currently enduring yet another year wrecked by the COVID-19 pandemic.

The verdict
With both sides coming off crushing preliminary final victories, it will be difficult to pick a winner with any real confidence.

The grand final will be Melbourne’s second match in the space of a month, having earned the weekend off by winning their qualifying final, followed by the pre-grand final bye which this year replaced the pre-finals bye (which itself was introduced in 2016).

In order to keep match-fit, the club organised an intraclub match last weekend, with no injuries reported. Steven May, who suffered a hamstring injury in the preliminary final, is continuing to convince club officials that he will be fit to take his place in the side. 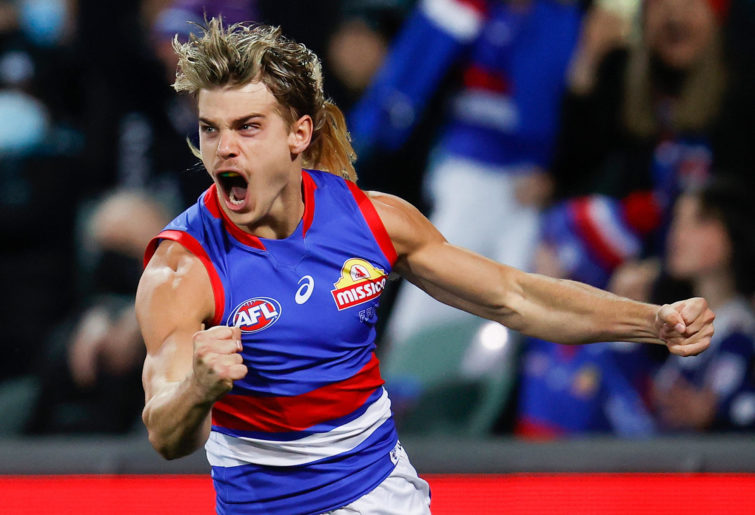 Meanwhile, the Bulldogs had played for thirteen straight weeks since their Round 13 bye, and were only released from quarantine last weekend, having been in Brisbane for its semi-final match (at the time, Queensland was considered low risk, rather than very low risk, by the Western Australia government).

With no local club to support in this year’s grand final, Western Australia fans have jumped on the Demons’ bandwagon as the club attempts to end its 57-year premiership drought – currently the longest active drought in the AFL – and I think the momentum will ultimately be with them.