Wallabies coach Dave Rennie says his team won’t be distracted by Argentina’s shambolic lead up to Saturday’s Test as he named a team including returns for two long-time absentees.

While Argentina will be without six squad members to choose from including two starters from last week after they traipsed over the Queensland border into the forbidden land of Byron Bay, NSW, the Wallabies have freshened up by bringing in several squad stalwarts.

Sean McMahon was named on the bench for his first Test since 2017, while prop Greg Holmes, 38, has made a remarkable return for the first time since playing his 27th Test in 2016 to become the oldest player for the Wallabies since World War 2.

Here’s everything Rennie said about his selections for Saturday

On why selectors rung the changes

“We’ve picked a side that we think is best for this weekend,” said Rennie.

“Some of the changes have been made on form – from those guys coming in or a couple of guys who we weren’t as happy with on the weekend.

“A couple of them are changes based on workload or opportunity.There’s not a lot of difference between a handful of our positions.

“Someone like Jake Gordon coming in, he’s been outstanding in training, hasn’t been involved since the third Test against France, while Nic White and Tate McDermott have grabbed their opportunities and had a stranglehold there.

“Tate’s had a great year but we’re keen to give Jake a bit of a sniff going to this weekend. That’s the reason for the change. We’ve got guys who have been training the house down and deserving an opportunity.

“We still want to pick a side that reflects earning the right to play and still gives us a good chance of winning on the weekend.”

On the return of Greg Holmes

“He’s done well,” Rennie said. “Obviously with Allan [Alaalatoa] heading home for his child’s birth and with Pone Fa’amausili injured we wanted an experience tight head in from a scrummaging perspective.

Holmes played for Western Force last year and owes his return to a random meeting with rennie at a Bledisloe Cup lunch in Perth ahead of the game earlier this month. Holmes asked if he could come in and spend some time watching training and now makes his return.

“We brought him into camp in Perth, he’s been with us for the last few weeks here and it’s gone really well. We think he’s ready to go and will do a job for us.

“He’s played good footy for the Force and that’s put him in a position where he is now.

“We’re rapt for him. I didn’t tell Homer he was in the mix so he was already applauding for the guy he thought was on the bench, and got a bit of a shock from it.

“There was a massive roar from the lads because he’s such a popular character. It’s not a sentimental selection – it’s based on what we need and we think he can do a job for us.

His call up was an astute call by Rennie.

“We’re confident because of his experience that he hold up his end of the scrum.

“He’s as surprised as anyone but it’s pretty cool. He’s certainly worked hard since he’s been here and we’re very comfortable with the decision.”

Rennie said Fa’amausili just missed out through lack of fitness.

“He is close but not quite,” said Rennie. “He’d be high risk is what the medics termed him this weekend.

“The last Rugby Championship game was the desire but he’s not quite there.”

Tom Robertson has been left out of the 23, with Rennie saying Holmes was a better tighthead option.

“We think he could hold up a scrum but we think Greg gives us more experience and nous in that tighthead role and that’s an area where we think the Argentinians will try and come at us. We want to make sure we’re really solid there.”

On the demotion of Rob Leota and return of McMahon

Leota made his debut at No.6 last Saturday but has slipped out of the squad altogether. Rennie had said before that selection that Pete Samu’s versatility meant that for the other backrowers it was a case of in the team or out of the squad. Samu has won a start, with McMahon on the bench.

“We were actually very happy with Rob last week,” said Rennie. “He’s a big man who gave us a bit of go forward. Good skill set. 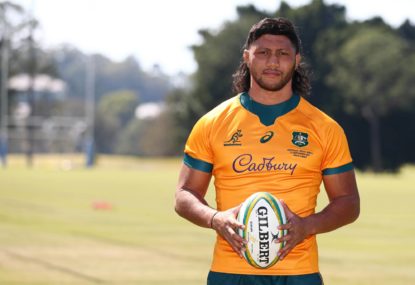 Rennie summed up McMahon’s attributes this way: “He’s very physical. He’s not the biggest loose forward going around but plays big. So we want to see that.

“He’s a machine in regard to work ethic. We want to see that. If he can give us physicality and work rate… He’s been around a long time, he’s got a good understanding of his role.

“He wants to get out and enjoy it. The best part of the game for him is having a physical imprint.”

Rennie said McMahon would likely cover six or No.8. “If we lost Hoops we would probably move Pete into seven and Sean into 6-8,” said Rennie. “He’s got clarity around the 6-8 roles. But he’s more likely to go to six and we’ll move Pete somewhere.”

Rennie also revealed McMahon, Samu Kerevi and Quade Cooper have all received clearance from their Japanese clubs to go on the northern hemisphere tour.

“Suntory have been fantastic,” Rennie said of McMahon and Kerevi’s club.
“They are very keen for them to play a bit of international footy and it works out nicely based on their schedule so we really appreciate their support.”

On what Jordie Petaia needs to do to replace Marika Koroibete

Petaia has come in on the wing wing with Koroibete given tme off with his family. Rennie said the youngster needed to step up to fill his teammate’s boots.

“We have the luxury of looking at footage from a variety of angles but [Marika’s] work ethic is phenomenal,” said Rennie.

“We know he’s got a great skill set, he needs to work a lot harder off the ball and he’s got aspirations of being a 15 and so that’s a big focus for him and he’s certainly trained that way this week.”

“He will definitely be [ready] physically. There are no guarantees for that though. We’ve got James O’Connor sitting on the bench this week who is equally as experienced and has been out with injury.

“What we’ve got is genuine competition for places. We’ve also got Noah [Lolesio] in the background who trained superbly today. He’sl earning and growing and it’s been good for the group.

“We’re not trying to think too far ahead. I have no doubt that players like Quade and James have got plenty more footy in them.”

On the Pumas’ situation

“There is no change to us at all,” said Rennie. “We’ve got a massive focus on us.

“The Pumas have been away from our home for a long time, haven’t played a home Test for a long time and there are plenty of motivating factors for them. We’re still trying to grow our game and whoever we end up with in front of us we’ll deal with on the day.”

On if he wants a statement win on Saturday

“We haven’t talked about a statement – we’ve constantly talked about the quality of our performance,” said Rennie.

Last weekend he said, “we felt we had a lot of ball and territory in the first half and we thought that would pay dividends late in the game.

“We created a lot of opportunities late and didn’t finish them off so that was a bit of a frustration, but you’ve also got to give credit to the Pumas.

“Their scramble defence is outstanding. The Africans split them a fair few times in the two Tests and barely got the ball over the line. They work hard for each other. We’ve got to be better and that’s what we’re looking for – a real clinical performance.”

He does appear to have the Wallabies in high spirits after three straight wins.

“There is certainly belief within the group,” Rennie said.

“We’re certainly a very different side now and we’ve got genuine competition for places and that’s helping. Guys understand they need to be at their best, otherwise they could lose their spot to someone else. We’ve got belief in each other.”

On the size of the European tour squad

“It’ll be 35, maybe 36, so smaller than what we’ve got now,” said Rennie. “We think that’s the right mix and we’ve got a fair bit of versatility within the group.

“I think those numbers are manageable. Ideally it would have been good to go away with a little bit less but it’s obviously difficult to get guys in quickly, even get flights to get guys overseas quickly at the moment.

“It’s not as straightforward as it has been historically. So we’ll take enough insurance. We’ve had 44 in the squad at various times this year.”