Grand Final at Suncorp: Could it happen again?

So, how was your Grand Final? If only that Facebook outage came a day earlier, us South fans could have been saved the ignominy of the entire city uniting in our misery.

I suppose a begrudging congratulations to Penrith is in.

Sure. Fine. Totally over it. Whatever.

As it was, I spent my Sunday morning at a non-descript London pub as an emotionally mangled wreck, oscillating between tiredness, intoxication and hungover regret.

With almost comedic inopportune timing, Rabbitohs supporters will now be facing the ridicule of their colleagues, neighbours and friends as Sydney finally opens up. Of course, it was the lockdown that necessitated the switch to Queensland, the first major final played away from Sydney since that 1997 Super League Final at the QEII Stadium (check out Steve Mascord’s upcoming book).

For all the controversy of the relocation, the viewing experience will not have been adversely impacted for most viewers. The majority of fans watch on TV, taking precedence over match-going punters.

Admittedly, there were only half the number of people at Suncorp that can usually fit into the Olympic Stadium – if anyone can tell me the scientific logic in 75 per cent capacity limits, please let me know. 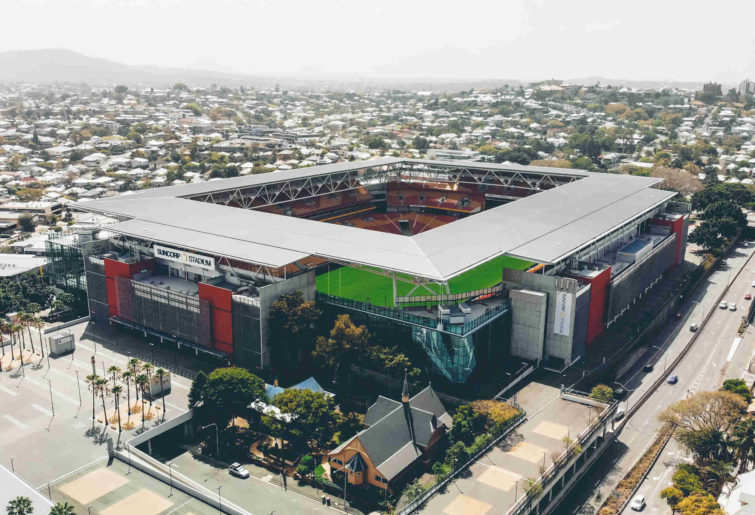 I have continuously pontificated over the importance of fans and their attendance as the soundtrack of the sport, but the powers that be would beg to differ. From the penchant for regular-season games at the soulless ANZ goldfish bowl to incomprehensibly impractical kick-off times, it is TV eyeballs and corporate sales that matter the most.

The lack of communal engagement and general fan paraphernalia should not be conflated with the geography of this year’s match. Usually, the streets are buzzing, and municipalities lit up with club colours in the week preceding. Obvious circumstances meant that was not a possibility.

Had Brisbane hosted, say, the 2014 Grand Final, there would have been the same raucous support in Bankstown and Marrickville, even if the game took place in the Sunshine State.

In light of this year’s event, will we see future Grand Finals staged away from New South Wales? History and tradition are often sighted as reasons for keeping it in Sydney. The NRL, the Super League War’s status quo post-bellum, ultimately traces its lineage back to the NSWRL.

There are 8.5 franchises in Sydney, and 11 within reasonable driving distance of Stadium Australia. Logistically, for fans at least, it makes far more sense for such a ‘local’ location.

But the NRL has callously disregarded match-going fans’ concerns for some time now. With the advent of merged clubs, ‘history and tradition’ are concepts cast asunder, only relevant when there’s clear monetising potential.

On that, the reason the Grand Final has stayed in one city for so long is, as ever, down to money. The NRL signed an agreement to keep the main event in Sydney until the 2040s as part of a $2.1 billion stadium deal.

As demonstrated by such a deal, and the travelling spectacle that is State of Origin, elite rugby league spectacles can be bought. And with the NSW Government canning that previously arranged deal “due to COVID”, it opens the opportunity for tendering anew.

From a sporting perspective, it would provide the perfect opportunity to spread the game. Brisbane is just as much rugby league heartland as Sydney, perhaps even more. With a second side joining the competition, then why not?

More to the point, offering the Grand Final to the highest bidder can help a league still reeling from COVID restrictions. With the 2032 Olympics, Lang Park may even see its capacity increased in line with Sydney. If not, the difference between 50,000 and 80,000 is an irrelevance when the big bucks are earned from corporate sales and state government payments.

It even raises the spectacle of a Grand Final in such exotic locations as Perth, Melbourne, and Auckland. There’s money to be made from visiting fans and world-class ‘events’. Such a move would certainly make the game more associative and demonstrably in reach of much of Australia (and possibly New Zealand).

This weekend will see the Super League’s Grand Final between St Helens and Catalans Dragons. The onset of French success has seen chatter about the fitness and fairness of Manchester as the perennial host venue, with a whole host of European cities capable of putting on such an event.

The current showpiece feels stagnant, too reliant on the same old, and afraid of bigger thinking (a perfect metaphor for English rugby league).

The NRL can stay one step ahead of the game. Sydney will not tire of rugby league, but that should not preclude other cities from demonstrating equal enthusiasm for putting on the big one.

Moving the Grand Final could theoretically happen. It would be a positive move, albeit done for self-interested reasons. Such is life.