Is Benji Marshall the best Kiwi rugby league player ever?

With the retirement of Benji Marshall it raised the questions usually reserved for greats of the game. Was he a future Immortal or in a class below that – and what is his legacy?

Generally if you are in this conversation you have had a pretty good career and Benji Quentin Marshall had exactly that.

While an Immortal may be a step too far, it is undeniable he will be in the NRL Hall of Fame, and also would be considered the greatest player from New Zealand.

His achievements and accolades would have pretty much every previous New Zealand-born player covered. Firstly, his 19 seasons is on par with Cameron Smith, obviously due to injuries and some challenging times in the early 2010s he didn’t have the 24+ game seasons that Smith consistently had.

However, even into his 19th season he was still performing, and much like Smith was rumoured to have a contract for the following season with the Titans if he wanted it!

Games played aside, Marshall having won a premiership and a World Cup puts him in rarefied air as far as Kiwis go.

The only other players from that team to do the double are – Jeremy Smith, Nathan Fine, Sika Manu and Adam Blair (Blair’s was part of the Storm 2009 team that was later stripped of the title). 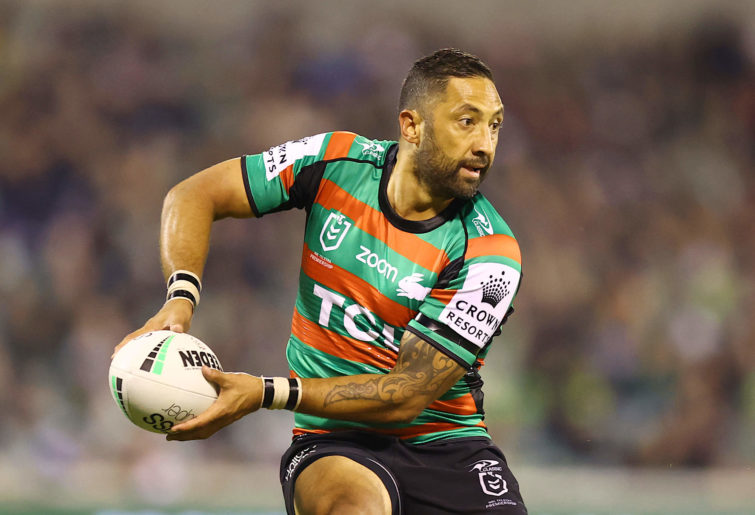 On top of this Marshall won a Golden Boot in 2010, one of five Kiwis to win this since 1984, in part for his season for the Tigers but also leading the Kiwis to the Four Nations trophy, beating Australia once again in a final in Brisbane.

The accolades as you would expect for someone who has been around so long are endless. With Marshall, regardless of the accolades though it’s the legacy he has left.

Effectively a pioneer in the early 2000s, Marshall’s pathway to the NRL came via Keebra High on the Gold Coast.

He showed what could be achieved as since then many other players have followed the pathway to NRL stardom.

Another part of the legacy is the prevalence of players with a touch background such as Ryan Papenhuyzen and Shaun Johnson, who through Marshall could see that smaller players with the touch footy skillset could success in the toughest game of all.

Two more points about Marshall and his legacy. He is now synonymous with the Kiwis No.6 jersey.

Pre-Marshall, the Kiwis never really had an established five-eighth with players such as Vinne Anderson, Sione Faumuina and often Nigel Vagana and Willie Talau filling in out of position.

Since Marshall players such as Te Maire Martin, Kodi Nikorima and Kieran Foran have all graced the No.6 jersey and players such as Dylan Brown and Chanel Harris-Tevita will look to carry on the now rich legacy of Kiwi five-eighths.

The final point on Marshall is his character. It’s a measure of the man that he never threw in the towel when he struggled to gain a starting role, he dug in and worked his way back to grade, instead of bolting to Super League or overseas rugby.

Sure he tried Super Rugby with the Blues but that was hardly running from his failure. Going to a team that was struggling was hardly an ideal system to try and learn a new football code. What was testament to his character was going back to the NRL and proving that he did belong.

Marshall’s legacy was further enhanced playing for the Dragons and being one of their better players and then going to the Broncos and happily playing wherever needed for the betterment of the team.

A final footnote at the Tigers should have been a fine way to end a career but as we know his career had one final twist going to Souths.

With the end of his career now confirmed a final footnote was the rumour that the Titans were keen to sign him for 2022. Surely a fine way to retire for a legend, knowing he retired on his terms.