He channelled that energy before the Matildas defeated Brazil 3-1 in their first game back on Australian soil. In his pre-match press conference, Gustavsson brought a whiteboard and markers to illustrate a point to a Zoom meeting full of journalists.

“I use this metaphor,” he said while drawing a circle. He added some arrows, another circle and a squiggly line.

“At any high-performance environment there’s a lot of pressure from the outside,” he explained. There was plenty of that heading into this game.

Women’s football in Australia as a whole has had a dark cloud hanging over it since allegations of historical abuse, harassment and bullying were revealed earlier this month. The revelations shocked the community but also spawned abuse and harassment directed at current and former Matildas.

On top of that, there has been angst about the Matildas’ on-field performance following their loss to Ireland last month. The return home under strict COVID safety protocols added even more pressure.

“In a high-performance environment there’s also a lot of pressure from the inside,” Gustavsson continued.

Athletes and coaches are by necessity highly competitive people who don’t enjoy losing.

Add in the fact that this was Gustavsson’s first game in Australia since becoming head coach, as well as Alanna Kennedy’s 100th game – two motivating factors in any team.

And then there’s the opponent, Brazil. A team the Matildas haven’t lost to in five games. A team with whom the Matildas share an intense rivalry. A team fans and players alike don’t want to lose to.

So all of this pressure, from internal and external forces, coalesced on the pitch at CommBank Stadium.

And that night at least, the Matildas existed in the squiggly line of Gustavsson’s metaphor. The sliver between internal and external forces. The high-performance zone, as he dubbed it.

Before a ball had been kicked, the team were in that zone. For 19 months the Matildas have been deprived firstly of football and then of home crowds.

Since April, the team has lined up on a pitch and heard the national anthem and been the only ones singing it. But today they were joined by 15,270 fans less the Brazilians who made their own noise and added to the atmosphere.

The adrenaline rush of singing the anthem together, of being surrounded by home fans, showed with a frantic opening stanza.

Australia always looked like scoring first and through Clare Polkinghorne they did, whose typically euphoric celebration was matched by the home crowd. 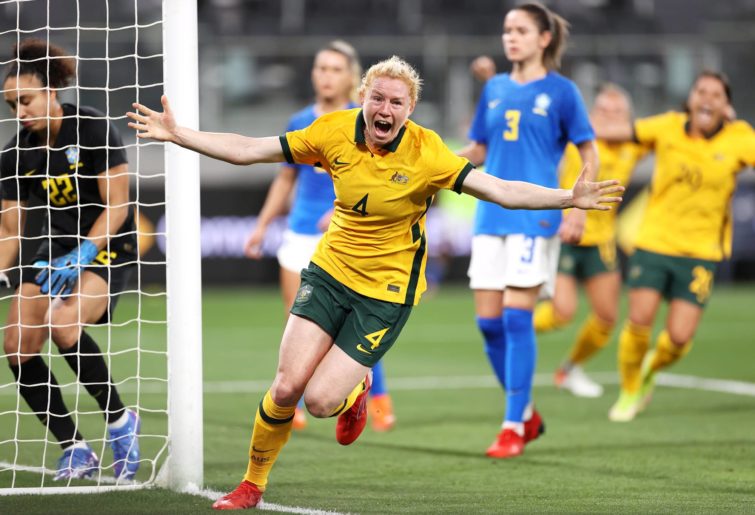 Sam Kerr was a provider, teeing up Polkinghorne for the opener and playing a role in the build-up of the third goal.

Mary Fowler was once again glittering, scoring the Matildas’ second goal. Her ascent from teenage prodigy to bona fide superstar continues at a rapid rate.

Ellie Carpenter showed her quality and was industrious and attacking.

Kyra Cooney-Cross, deployed as the six, put in a shift any domestique would be proud of.

Emily van Egmond, unshackled from the six, played only a half but provided the assist for Fowler and scored a goal of her own. Her value in the front half of the pitch was plain to see.

The use of the back four proved to be fruitful, despite the few shaky moments and the unfortunate error which led to Brazil’s only goal.

It was exactly what the team needed and what the 15,270 people in the stands and the thousands more watching on TV wanted to see.

Round two takes place on Tuesday night and is set to be just as exhilarating but with a little less pressure.

Not that the team will mind. Pre-match, Gustavsson put the whiteboard away and wrapped up his metaphor: “We need to get used to performing under pressure.”

A World Cup on home soil is set to involve plenty of performing under pressure.