What a balanced All Black loose forward trio can deliver

Archimedes said give me a lever long enough and a fulcrum to place it on and I shall move the world.

It took until the end of year tour and coming up against a weakened Wales for the All Black coaching team to accept that setting a similar rock solid platform should take precedence over the long range hit and run tactics which have dominated selection and game plans in 2021.

Wales were certainly impacted, more from injuries than the Test window issue, but they started a strong tight five missing the late withdrawal of Ken Owens, while Ross Moriarty and Aaron Wainwright. In the back row, Ethan Blackadder and Dalton Papalii were well covered from a Test caps perspective.

Taking this head on, there was a clear change of mindset from the All Blacks on Saturday, hard at set piece, super hard at the breakdown, and to use the cliché, earn the right to go wide, and they did.

The selection of Papalii and Blackadder in tandem consigned to the bin the ideological shoehorning into the trio of the wide-ranging loose forward, one which was horribly but predictably exposed against the World Cup holders at both breakdown and tackle time, and the tandem hard at the ruck on-ballers and big hitting tacklers showed what we had been missing the rest of this year.

Dalton Papalii was perfect in his tackle count again with the noticeable tweak in style, unlike prior outings in the 7 shirt where he played more like a blindside, this time we saw him playing more Cane-like, out in front of the line, pressuring the Welsh 9 and 10, making his tackles on the other side of the gain line and creative with ball-in-hand.

Add to this the perpetual motion of workhorse and serial pest, Ethan Blackadder, and the darkness had a platform to play off that was unrivalled this year.

But most importantly, they looked like a partnership, at ruck time, in support running and in re-setting the post at ruck-time, they looked to be in sync.

By my count at least two of the loose forwards arrived together at no fewer than 18 offensive rucks in that first half, another big step up from the rugby championship. Ruck defence wasn’t perfect, but it was a whole lot better than of late.

Worth a mention here for Ardie Savea, he joined in selectively at ruck and tackle time with his two flankers, but the single most important element was his ability to stay in structure.

With Papalii and Blackadder dominating at tackle time and on the ground, it would be easy to wander, but Savea stayed narrow, made all his key runs in the early part of this game straight into the teeth of the defence, ( 6 runs for 32 metres in the first half), only popping up out in the tram tracks with the razzle dazzle stuff once the hour mark had passed and gainline was firmly under control.

With a firm base to play off and keeping connection with those around him, Ardie is almost unstoppable.

From 2.52 on the clip we see a Blackadder gain line carry, Papalii arrives for the cleanout and Savea gets the final carry and off load for the halfback to go over. (What isn’t on the tape is one prior carry and offensive cleanout from Blackadder and Papalii respectively)

Balance and combinations are always more important than individual skills in the back row, and we saw some really promising signs from this trio as a combination.

The remaining forwards were clearly on a mission of sorts, Wyn Jones et al would not have been expecting the scrum squeeze that came their way, Sam Whitelock demonstrated why his absence in Australia had such an impact, both at offensive and defensive lineouts, while the workload of the front row across the park was a real step in the right direction.

With dominance up front TJP got a free ride at halfback, Beauden Barrett was unmolested as he ran free and rest of the back-line chimed in, in what was largely a low error display. 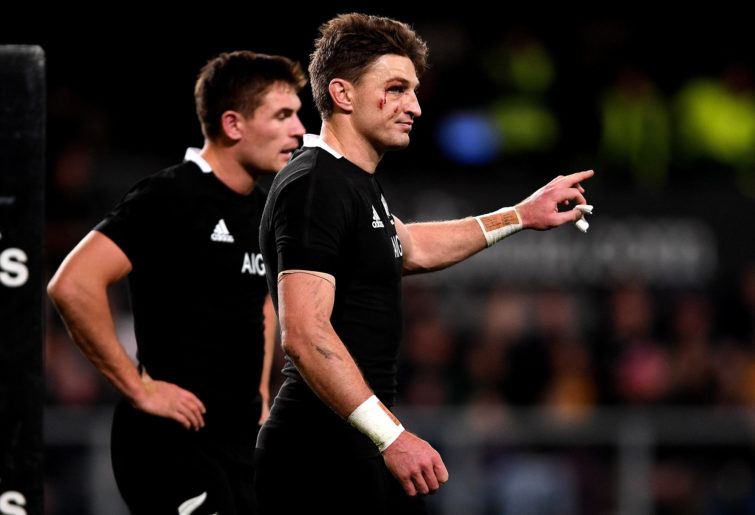 Barrett’s first intercept was an excellent example of defence forcing the error out of Gareth Anscombe.

Stop this clip at the 17-second mark and you can see where the pressure comes from.

Codie Taylor has played the openside flanker role off the back of the lineout and pressured Anscombe, Papalii has the narrow runner covered, Havalii has taken the two out runner leaving Barrett free to drift into the gap and pick the pass off.

A couple of closing observations, I am increasingly liking the defence of Anton Leinart-Brown and if he is to be the man that we build that backline defence around lets make sure he is not moved. I was sent an interesting snippet last week, Conrad Smith played 94 Tests, starting in 90 – how many times did he wear the 12 shirt?

Not once is my correspondent’s assertion, and he is a normally reliable source, so no more shuffling. If he is to be our centre – anoint him, and leave him there, and solve for 12 separately.

I for one am hoping that two recent trends can be consigned to history on this tour.

We have no need for the wide playing flanker in a pack that has Dane Coles/Codie Taylor, Ardie Savea and Brodie Retallick, and neither Beauden Barrett or Richie Mo’unga need a second play maker in the side if we have Aaron Smith/Brad Weber and the back three which started this test.

They are a distraction and unbalance the side to the overall detriment. Time to bin both these theories and see how we go against Ireland and France.