Will Skelton reveals 2020 snub, and what he missed most in Wallabies wilderness

Recalled Wallabies lock Will Skelton is backing himself to be ready for Monday’s (AEDT) Test against Scotland at Murrayfield as he makes a belated return five years after leaving Australia.

Skelton, 29, left Australia at the end of 2017 having played 18 Tests to join Saracens. Earlier this year he re-signed with French outift La Rochelle until the end of 2025, and has been in sensational form this season, leading to his Wallabies call up.

Skelton revealed he knocked back a similar request a year earlier because of family issues.

Coach Dave Rennie suggested it would take time for Skelton and fellow European based reinforcements to get up to speed with the team’s game plans, but Skelton says he’s raring to go.

“I went through a bit of detail last night,” Skelton said on Wednesday. “It seems quite simple. It’s something as a rugby player you’ve got to get used to quick.

“I’m not too sure, I’ll see what Rens is thinking. I’ll definitely be putting my hand up, I think all the boys will be who come in, because we’re not here to sit back and train for the three weeks.

“We want to try and be involved and put our hand up for selection. But we’ll be trying to get our heads around it for Sunday with a seven-day turnaround.”

Skelton has long been a target for Wallabies coaches, and Rennie will be delighted to get his man after missing out last year when Skelton knocked back an approach from Rugby Australia director of rugby Scott Johnson.

“I spoke to Scotty Johnson last year with the Rugby Championships, but it was a shorter version of that and there was a massive bubble for like 12 weeks and he asked me then,” Skelton said.

“It didn’t work out, my wife was pregnant and I didn’t want to leave her. I thought the door was closed. Rens gave me a phone call in the middle of the year and asked if I wanted to be involved, ‘we’ve been looking at you’.

“He said ‘keep playing good footy and you might be involved’. I just put my head down and I’m here now.”

Skelton said he had been warmly welcomed into the group.

“There’s a few guys I hadn’t met, but (they’re) very welcoming,” Skelton said. “You can see the camaraderie in the group, everyone cares about each other. There was a bit of banter on the first day too, which was nice. And the Aussie accent. I don’t know if I missed that!

“I had seen how well the boys had been going and looking from afar, you want to be involved, you want to see what’s happening with the group, new coach, new staff, new boys coming through, so it’s exciting and it’s been a lot of fun since I’ve been here.”

Skelton, as with Rory Arnold, felt his playing days for the Wallabies were likely over, and there were aspects he missed. 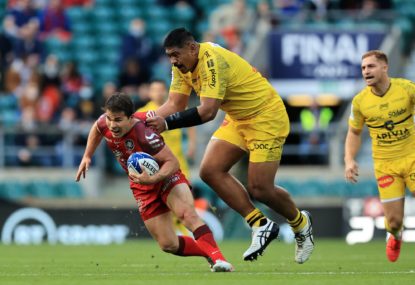 The main one was no longer “playing with the boys I grew up with.

“I played a lot of club rugby with guys like Hoops, most of them have left now, but I remember guys like Keps as well.

“You build relationships with them at the start of your career and to be able to play with them for your country is the ultimate, it’s something very special and something you never take for granted, so to be involved with the group again, it’s something I didn’t think was coming, but I’m grateful to be here.

“It was good to see Hoops again. Guys like [Nic White], I made my debut with Whitey, so obviously very cool to see those boys again.

“I haven’t seen them in a few years. I’ve seen how well they’re been playing. They’re on a winning streak and you want to come in and add value, you don’t want to be pulling them back.

Wallabies teammate Taniela Tupou said he was looking forward to having Skelton’s presence in the scrum.

“I had never really played with Will, just imagining having him behind me or Allan (Alaalatoa) or any of the tightheads. As a prop, that’s a dream. You don’t have to do much. You just have to be in good shape and Will will do the rest,” Tupou said.

“It’s funny because back here in 2017 I came yesterday, put my key into the room, they put me in the same level I was a few years ago and now playing on Sunday (local time), my debut was on a Sunday too. It’s good to be back here and looking forward to hopefully playing this week.”

That game resulted in a record smashing 53-24 win to Scotland.

“I haven’t watched the game since I played, but not the best game,” Tupou said. “Hopefully we’ll change that around this week.”

Tupou has had an excellent season, chiefly starting out the campaign as an impact player from the bench, and his growing status in the team is reflected in his feelings about the current Spring Tour.

“I think I’ve enjoyed this one a lot better. I’m a lot older and I’m not the 18-year-old kid trying to get into the team, I can be myself around the boys and offer something. It’s a lot different this time,” said Tupou.