Australia’s thumping win over Bangladesh overnight was all about the numbers. And they check out for Justin Langer’s men, whose hopes of progressing to the T20 World Cup semi-finals have gone from 30/70 to 70/30 on the back of one result.

Not only does it mean victory over the West Indies on Saturday night will (almost certainly) see Australia through, but even a loss could see them progress, provided South Africa lose against a dominant England outfit. Wrapping up victory in just 6.2 overs has bought Australia an almighty insurance policy.

While the intense focus on net-run-rate throughout Thursday night’s game grew somewhat tiresome, the ICC’s questionable way of separating sides in knockout tournaments in this instance works for the Aussies. Their NRR climbed exponentially from a lowly -0.63 (thanks to Sunday morning’s huge loss against England) to a more-than-respectable 1.03. Importantly, that sees them overtake South Africa’s 0.74.

Perhaps as importantly as getting back in black, the win goes some way to re-instilling Australia’s battered confidence in the wake of defeat to England last time out. Bangladesh, of course, are several rungs below England’s T20 quality, and Thursday night’s thumping does not erase the significant question marks that hang over Langer’s side.

But it reinforced that Australia boasts a world-class T20 bowling line-up, who they will rely heavily upon to progress deep into this tournament. Victory in Dubai was set up by Australia’s two most in-form bowlers in Adam Zampa (5-19) and Josh Hazlewood (2-8), the former snaring just the third Australian five-wicket haul in T20 internationals.

Hazlewood’s rapid T20 improvement has been well documented in recent months following IPL success with Chennai, and his progression beyond being a one-dimensional bowler in the game’s shortest format is testament to his professionalism.

But it’s Zampa who is now one of Australian cricket’s real success stories of the last ten years. Perhaps unfairly, Zampa doesn’t give the impression of an ultra-professional, striving towards continual improvement.

But he is a real student of the legspin craft, and continues to get better. It might be the ultimate compliment that, when he performs game after game, it causes little stir. People expect him to do well, and he more than often delivers. By the end of the game, Zampa was the leading wicket-taker during the Super 12 stage of this World Cup. 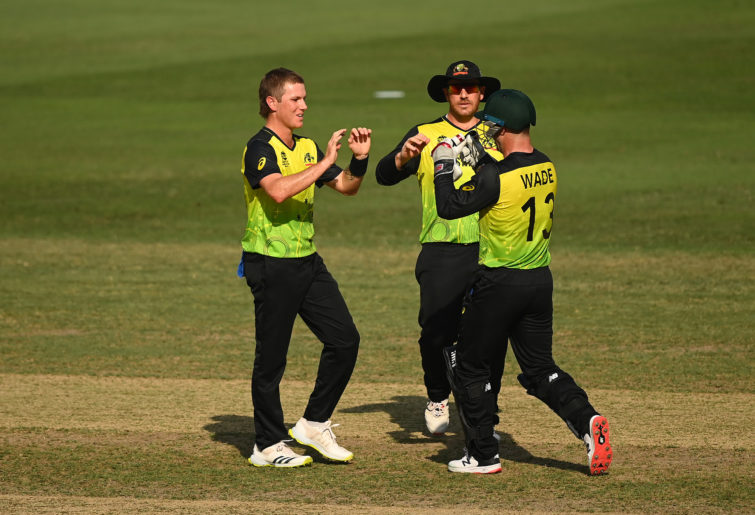 After running through Bangladesh for just 73, skipper Aaron Finch (despite not admitting as much post-game) looked like a man wanting to wrap things up within the power-play. In the end, a Mitchell Marsh six wrapped things up just two balls after umpire Kumar Dharmasena performed the obligatory windmill-arms at the end of the sixth.

Finch’s innings started agriculturally, legs rooted to the crease flaying (and missing) at almost everything. But once he whipped Mustafizur off the pads for six through midwicket, something clicked. He hit four sixes in his 20-ball knock — four more than Bangladesh managed in their 90-ball innings. It’s beyond question now that the skipper is beyond his best. But his power-game, as shown in his quick fire innings, remains.

It was Marsh’s innings that, while short (16* off 5), was one of the most positive aspects of the Australian performance. In the lead-up to this World Cup, teammates and coaches had fawned at the form of Marsh (“no one’s hitting them better”), but he was inexplicably dropped against England, collateral damage to the conservative move of picking five specialist bowlers.

The move spectacularly backfired, and it’s pleasing the selectors returned to Marsh against Bangladesh. There’s few players who can lead Australia to against-the-odds success in the UAE. Marsh is one of them.

The Windies clash will worry Australia. On form shown thus far, Finch’s men should do enough to progress.

But any side that boasts the hitting Andre Russell, Kieron Pollard, Nick Pooran and Shimron Hetmyer is a chance to do lasting damage. While the situation dictated that Australia came out hard against Bangladesh, it needs to adopt a similar aggressive approach in what should be a huge clash on Saturday night.