'Give me one game': Chris Gayle might not be done with the Windies just yet

West Indies’ veteran batsman Chris Gayle acknowledges he has played his last T20 World Cup match, and plans to hang up his bat after playing a final game in front of his home fans in Jamaica.

The World Cup holders ended their campaign with an eight-wicket loss to Australia in the Super 12 stage but the Caribbean side had already been eliminated earlier, finishing fifth in their group.

After being dismissed for 15, Gayle walked off the pitch with his bat raised and a smile on his face. He celebrated his wicket of Australia’s Mitchell Marsh by running over and giving the batsman a bear hug.

Gayle gives Marsh a hug after getting him out! ????????#T20WorldCup #AUSvWI pic.twitter.com/39cnhWinEU

“I’d love to play one more World Cup, but I don’t think they will allow me,” he added with a laugh.

Gayle, 42, shares the longest career in T20 cricket, spanning more than 15 years, with his teammate Dwayne Bravo, who announced his retirement before the game.

“It’s been a phenomenal career. I didn’t announce any retirement, but they actually give me one game in Jamaica to go in front of my home crowd,” Gayle added.

“Then I can say, ‘Hey guys, thank you so much.’ Let’s see. If not, I’ll announce it… and then I’ll be joining DJ Bravo and say thanks to each and everyone. But I can’t say that as yet.” 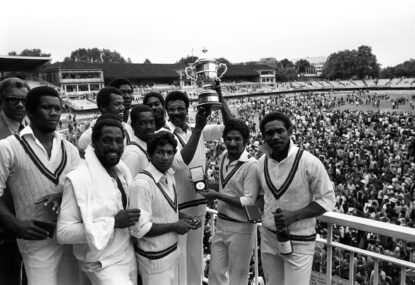 The fourth and final instalment looks at some great West Indian players, most of whom would have been superstars in the ODI format. I…

India have celebrated their 1000th one-day international with a crushing six-wicket win over West Indies, achieving the landmark win with a remarkable 22 overs…