The Roar
14th November, 2021
316
Join the conversation
3596 Reads
Advertisement
Write for The Roar

Australia have crossed the final frontier with a maiden T20 World Cup triumph, a stunning unbeaten 77 from all-rounder Mitchell Marsh acing a tricky run chase in the final to down New Zealand by eight wickets.

With support from Player of the Tournament David Warner, who capped off an exceptional campaign with a third half-century, the all-rounder, dropped from the team just four matches ago for a disastrous loss to England, took centre stage with six fours and four sixes to see the Aussies run down a target of 173 in a canter with an over and change to spare.

Dispatching spin and pace alike, it was a performance that entrenched his transformation into one of the world’s premier T20 batters in 2021, and will surely thrust him into contention for a spot in the Test team for this summer’s Ashes series.

Marsh’s heroics outdid one of the finest World Cup innings ever seen from Black Caps captain Kane Williamson. Dropped on 21, the star number three would dismantle the Australian attack, in particular Mitchell Starc, to single-handedly set a competitive total.

Player of the Tournament in New Zealand’s heartbreaking near-miss at the 2019 ODI World Cup, Williamson was at least spared another forgettable personal trophy by Marsh’s onslaught, the Australian a fitting man of the match recipient.

Australia’s victory continues their stranglehold over New Zealand in all formats. The Kiwis are yet to defeat Australia in a knockout match at any major tournament; while of 18 previous quarter-finals, semi-finals and finals against their Trans-Tasman rivals, their sole victory came in a best-of-five finals series back in 1981 that they would go on to lose anyway.

For all that Williamson’s team have achieved in the last seven years – including three finals in limited-overs World Cups and a World Test Championship triumph earlier this year – defeating a full-strength Australia when it matters most remains a hurdle they are seemingly incapable of clearing.

Nevertheless, they can look back with pride on another exceptional tournament, defying their underdog status to knock pre-tournament favourites India out of the group stage, and number-one ranked side England in the semi-finals.

Despite pre-match claims that the match wouldn’t be decided by the coin toss, Aaron Finch was again quick to choose to bowl first after his sixth win in seven games this tournament – a streak just as impactful as anything he’s managed with the bat in a disappointing campaign.

The only time at the 2021 #T20WorldCup was against England, who beat Australia by 8 wickets… ????https://t.co/ejaVX07a0O pic.twitter.com/89GjlZyClQ

Immediately, the toss looked a good one to win as a slow Dubai track, and some relentless bowling from the Australian battalion, suffocated the Kiwis top order.

Pick of the bunch was Hazlewood, the Test star recovering from a pummelling at the hands of Pakistan in the semi-final with the early scalp of the Black Caps’ final-four hero, Daryl Mitchell.

The mode of dismissal – a classic seamer’s wicket with the opener edging to a diving Matthew Wade – wouldn’t have looked out of place in this summer’s Ashes series. It was a seventh PowerPlay wicket for the gun paceman, a tournament high.

With the right-armer conceding just 11 from his first three overs, the Black Caps had no answer. Restricted to just 1/32 after the PowerPlay – their lowest effort for the tournament – and with the miserly Adam Zampa still to come, the Aussies had the match by the scruff of the throat.

With the score 1/57 at the halfway mark, and sitting on a run-a-ball 21, Williamson decided it was time to go. But a mistimed swipe off a Starc full toss was sent straight to Hazlewood, the tallest man on the field, at fine leg; only for the main man with the ball to make his first, and comfortably costliest, misstep of the night.

Superb spell from Hazlewood: brilliant lengths with the new ball and excellent slower balls at the death. But that drop could define his night

It would be Starc again who felt the brunt of the carnage to follow. A 147kph beamer incredibly bashed through mid-wicket for four summed up the change in mood; the Aussies suddenly rattled, Williamson keen to make them pay. He’d need only twelve further balls to reach 50, courtesy of twin sixes off Glenn Maxwell as he successfully targeted the Australians’ vulnerable fifth bowling options.

Does Kane Williamson have a cheat mode activated?

A one-handed six for the Kiwi captain and he's got a fast fifty #T20WorldCup pic.twitter.com/R3VWcUts8q

Already 0/28 after two overs, Starc’s third soon after would turn a ghastly evening into an utter nightmare. From outside edges and wild hoicks flying to third man for consecutive boundaries, to a poorly disguised slower ball disdainfully whipped for six over mid-wicket, this was a dismantling of one of the world’s premier white-ball bowlers by a batter at the peak of his game.

The over would go for 22; remarkably, following the drop, eight of the next ten balls from the left-armer would be sent either to or over the boundary by the Kiwi captain. 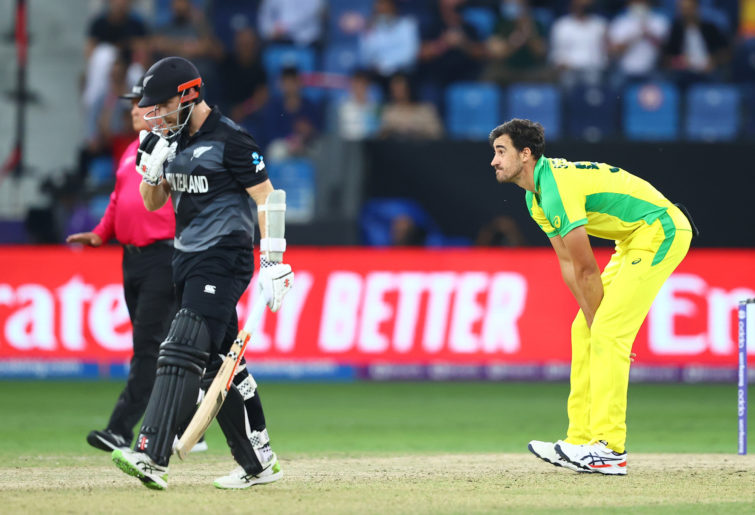 It would eventually be Hazlewood to remove the superstar within reach of a first ever century in a T20 World Cup final, a mistimed loft caught at long off; but having reached a spectacular 85 off only 48 balls, the horse had well and truly bolted.

Had the earlier catch been taken, Williamson would have finished the tournament with an average a tick over 30 for the tournament, with a strike rate of under 100; and facing questions over whether his Test supremacy could translate to the shortest format. Such are the fine lines when it comes to T20 cricket.

Starc, the man who nearly had him out in the first place, would bear the brunt of the assault: his figures of 0/60 after four overs the equal fourth-most expensive at a T20 World Cup.

Around Williamson’s masterclass, the Aussies rallied; Zampa was again outstanding, smothering Martin Guptill’s superb record against wrist-spin to have him caught on the boundary for a dawdling 35-ball 28. Figures of 1/26 from his four overs saw the leggie finish with 13 wickets for the tournament, at an average of 12.07 and an economy rate under a run a ball, cementing his newfound standing as one of the premier limited-overs spinners in the world.

Hazlewood would finish with the wicket of Glenn Phillips to go with that of Williamson, his figures of 3/16 a fabulous return if not for his costly blunder in the field. All in all, 4/172 off 20 overs was a fine recovery from Australia in the death overs; but for one of the great T20 knocks, the match would have already been done.

Kane Williamson doesn't hurt you with power, when he plays well it's like death by a thousand cuts.. literally. What a joy to watch a champion batsman at the height of his prowess come to the party on the big stage. #AUSvNZ #T20WorldCupFinal

Chasing has been the domain of Warner throughout this tournament; he had almost single-handedly larruped Australia to victory with 50s against Sri Lanka and the West Indies, before a masterful 49 against Pakistan set the stage for a famous win. With Finch removed early to a top-edge for just 5 to continue his horror record at the pointy end of World Cups, he would need to stand up again.

With Marsh once again partnering him for a lengthy stand, Warner would end up playing second fiddle to the all-rounder’s heroics, in contrast to the semi-final in which the veteran took centre stage. The pair have worked wonderfully together in Australia’s surge to the final, one always rising to the occasion if the other is bogged down; and so it was again when it mattered most.

A cautious start by Warner saw Marsh whack boundaries from his first three balls – including an audacious six off his first – the pace of Adam Milne as unsuited to the pitch as a bazooka to open a tin of beans. It allowed time for the left-hander to find his range; having ambled to a run-a-ball 26, a trio of boundaries from leg-spinner Ish Sodhi showed his patience was paying off.

1/82 from the first ten overs became 88 one ball later courtesy of Marsh’s third six, a heave over fine leg off Neesham. “That is brutal hitting, and nothing else,” enthused veteran commentator Harsha Bhogle following an imperious pull shot off the usual reliable Mitchell Santner one over later.

Spin had proved supremely effective for both Australia and Pakistan in Dubai just three nights earlier; but with neither Santner or Sodhi so much as troubling the dynamic duo, Williamson was forced to bring back his strike man Boult, rather than follow his preference of saving him for the death.

The left-armer would come up trumps, though; Warner skittled for 53 looking to whip to rejuvenate New Zealand hopes. His third half-century of a critics-defying campaign had taken the Aussies to the cusp of glory; while it was’t enough to go past Pakistan captain Babar Azam in the World Cup tallies, it would land him the surprise gong of Player of the Tournament in the post-match presentation.

And the Black Caps still needed to remove his partner. 50 would soon follow for Marsh, too – his second of the tournament and sixth in the last four months alone, and without doubt his finest.
A sole beacon of hope in Australia’s ill-fated tours of Bangladesh and the West Indies, the move of Marsh to the number three batting spot, in lieu of any other options, would prove a masterstroke by coach Justin Langer, whose faith in his fellow Western Australian has never seemed better placed.

“This has been one of the best T20 innings I’ve seen,” Shane Watson, Marsh’s forerunner as Australia’s resident gun all-rounder, gushed on commentary. Earlier, Williamson’s 32-ball half century had been the fastest ever in the final of this tournament; Marsh needed just an hour and a half to claim that record for his own.

Even Maxwell, averaging 9 at well under a run a ball leading into the final, got going to help prevent any late hiccups following Warner’s dismissal. A top edge on a well-directed Milne bouncer brought up four; just the sort of luck that has deserted the Victorian this tournament, and all but confirming it would be Australia’s day. His 18-ball 28 to see them home, while too late to be a match-winning innings, showcased the power and ingenuity that has made Maxwell a limited-overs gun for nearly a decade, and should silence any doubts over his place in the team.

Fittingly, Marsh would be unbeaten at the end, though Maxwell would do the honours to close the match out, an audacious switch-hit for four off Tim Southee sparking scenes of joy in the Australian camp.

Ranked sixth in the world heading into the tournament, this was an uncharacteristically unexpected triumph from the most successful nation in cricket history. But you suspect they won’t care a fig about that.