After an awful 2021 season that saw an ex-player hit out at the club, Michael Maguire reportedly hours away from being sacked before a last-minute push to have him retained, and a fan-base boo their not-so-roaring team off the Leichhardt ground at halftime, playing for Tommy Raudonikis, the Tigers can say goodbye to the 2021 year and look forward to a fresh start in 2022.

The biggest question mark hovering over the Tigers for 2022 is their spine and who will play where.

Fullback
One of the very few shining lights for the Wests Tigers was Daine Laurie, a third string fullback from the Penrith system biding time behind the likes of Stephen Crichton and Dylan Edwards, snapped up by the Tigers on a bargain deal considering how well he played in 2021. 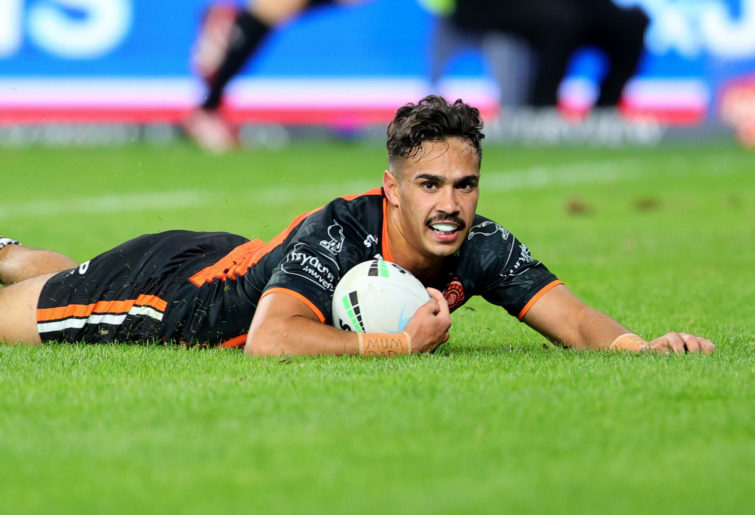 Laurie made 19 appearances for the tigers before getting injured, but was instrumental in their attack scoring seven tries, eight try assists, 71 tackle breaks, and nine line breaks.

With a big off season, I see Laurie developing his support game which we saw little of this year only weighing under 80 kgs which will see him improve immensely, easily claiming the fullback role with little or no competition.

Depth: With the loss of Moses Mbye, there are no genuine fullback options if Laurie is injured. Adam Douehi (injured) played fullback at Souths and would be the only possible replacement.

Five-eighth
Jackson Hastings is who the Tigers should be looking at to play 6. Hastings had a great year over in the UK and has the potential to play his best football as a five-eighth.

Hastings played 22 games in which he had 18 try assists, 87 tackle breaks, 297 tackles with a 93 per cent tackling efficiency also leading the league with kicks in general play. While Doeuihi played his best football wearing the 6, the squad would achieve more if they played Hastings at 6 and Doeuihi in the centres.

Deouihi is very strong defensively which would help with their edge defence, combined with the level of attack he provides, it only seems right to get the best of both worlds.

Halfback
The age old question… is Luke Brooks the halfback the tTgers need? Doesn’t matter, Luke Brooks will wear the 7 jumper in 2022 and that isn’t negotiable.

The first thing Tim Sheens did upon arrival was to sit down with Luke Brooks and confirm that he will be seeing out his contract with the possibility of playing beyond 2023.

The Tigers had the opportunity to get rid of Brooks with the weeks of speculation regarding a move to Newcastle, but they were adamant he was staying.

Despite fan comments stating he should play hooker, with the salary Luke Brooks is on, there is almost a ‘need’ to play him at 7 with the hope to get a return to the high level of football he played once before and get some return on his salary.

Hooker
It is time for some stability in the hooking role. For the past 12 months the Tigers have swapped and changed between Mbye, Jacob Liddle and Jake Simpkin but the Tigers need to achieve consistency which starts with giving Simpkin the 9 jumper.

He has recently re-signed, is highly touted by Brad Fittler, and is the future of the Tigers club. If the reports surrounding Josh Hodgson are true, then the thought of Simpkin working closely with Robbie Farah and Hodgson which should develop his game significantly is very appealing.

The best current spine the Tigers can choose is Laurie, Hastings, Brooks, Simpkin.