Gallen, who has improved his record to 12 wins, one draw and one loss after his first fight since losing to Justis Huni in June, called out SBW after the victory.

He said he intended to retire from boxing next year and said the New Zealand dual international needed to put up or shut up.

“No idea what’s happening next, I’m 40. There’s one fight everyone wants to see me have, it’s been spoken about for 10 years, who knows if it’s going to happen,” he said.

“I said I’m going to retire next year without a doubt so unless it happens by the middle of the next year it won’t happen.

“We got offered $4 million each to fight twice next year and it’s not happening. That’s unheard-of money. It’s ridiculous we’re not doing it. The ball’s in his court and I’ve said for years let’s do it but there’s going to come a time when I say no more and you can bet your bottom dollar that’s when he says let’s do it.” 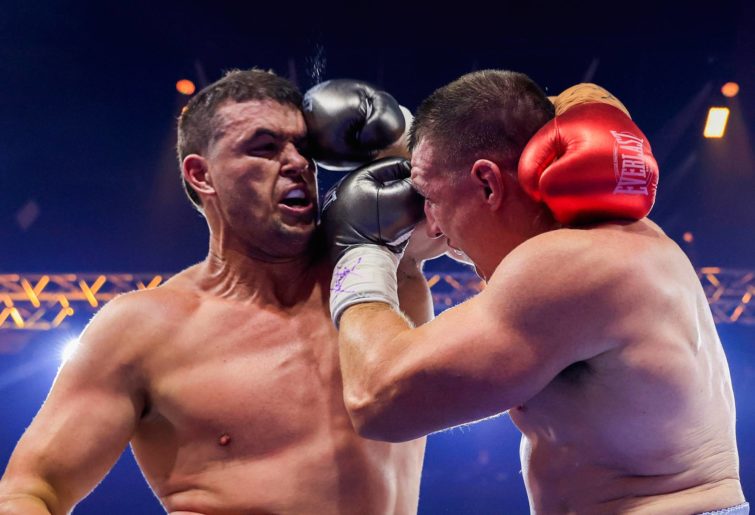 Lussick, who stepped in to take the fight last month after Manly prop Josh Aloiai was ruled out after contracting COVID-19, came out with all guns blazing in the first round to put the pressure on his more-experienced opponent.

He bombarded Gallen with a barrage in the second round to have his opponent on the ropes but the former Cronulla skipper bounced back to lands some big body blows on the taller Lussick.

By the end of the round, Lussick was knocked down after lurching forward.

He got up and tried to fight on but fell flat on his face and after bravely coming back for the third round, it didn’t last much longer with the referee calling off the fight.

“He’s a big boy – 6-foot 5, 110kg. I couldn’t catch him early. To his credit he really went close to the distance. He had me smothered there for a bit but we got the job done.

“With all due respect I wasn’t concerned even when the start of the second round he had a big flurry. You can go back and watch it but not a single punch landed, I was just parrying them.

“I let him wear himself out a bit but he’s a tough dude and I can’t thank him enough for stepping in after someone else pulled out.

“I just got to do what I can do and I did that and got the stoppage.”

Wednesday night’s fight night was the second of a two-day event but Gallen said he was sick of supposed boxing fans complaining about footballers stepping into the ring.

Gallen was awarded the $20,000 by promoter George Rose for the knockout of the night and he said he would give the bonus dollars to the young pro fighters Sam Goodman and Harry Garside as a way of helping them in their budding careers.

He called on fight fans to support the pro boxers more so that attention in the sport wasn’t always centred on former NRL and AFL stars cashing in a superannuation pay cheque after their playing days were over.

Garside lined up for his pro debut in the main lead-up fight against Fijian southpaw Sachin Mudaliar.

The young lightweight’s first fight in the professional ranks lasted less than one round with the referee stopping the fight because the Olympic bronze medallist’s opponent was not fighting back.

Garside said his right hand is still not right after it hampered his Olympic campaign and he would use the summer to get it fully healed before setting his sights on bigger fights in 2022.

Quality from Paul Gallen & Harry Garside. Gallen gives some of his $20k best win winnings to Harry Garside, who then said he will donate it to charity! #GallenLussick pic.twitter.com/4xWfWLDZ1M

Goodman, who entered the ring unbeaten in nine fights, stopped his Filipino opponent Richie Mepranum in the sixth round to take the Oriental Super Bantamweight title back to Albion Park on the NSW South Coast.

Their heavyweight fight was a borderline bar-room brawl but the Samoan international landed more blows to win a unanimous verdict.

The boxing gym that I train at is just a suburban gym except that it is legitimately gigantic. You walk in and there’s a…

Former rugby legend/villain (depending on your perspective) Paul Gallen will step into the ring against boxer Kris Terzievski tonight in Newcastle, as the two…