Could the Panthers be key in rugby union's future in Penrith?

On a windy and wet Saturday afternoon in November 2021, something very surprising happened in Penrith: over 10,000 fans filed into BlueBet Stadium to celebrate with the team almost six weeks after they had won the NRL grand final up at Suncorp Stadium in Brisbane.

With my son still in the Panthers SG Ball squad, he was expected to attend and as I drove him up to the stadium I was expecting there to be a handful of devoted fans braving the elements and holding onto that winning feeling.

I was blown away by just how big and loud the crowd was. To get 10,000 people to the stadium so long after the game was actually played to celebrate such a stellar season is a testament to just how well the Panthers are travelling.

If you look at the success of the both the Panthers and the Penrith District Rugby League in contrast to how rugby union in the region is fairing, a concerning trend appears.

Don’t get me wrong – rugby is still very present in the area and is still producing a small handful of quality players, but there is no escaping the fact that the Sydney Rugby Union found it so easy to axe the Penrith Emus from the Shute Shield last year highlights just how overlooked the area is to those in positions of authority at both NSWRU and Rugby Australia.

While the cashed-up Shute Shield clubs had their reasons for axing the Emus, number one being that they do not like to travel to Nepean Rugby Park in winter time, the most concerning part of the whole exercise was just how happy those in charge were to step aside and let it happen.

While the decision was made by totally by the Sydney Rugby Union when they created a participation agreement that Penrith were never going to be able to fulfil they awarded themselves carte blanche to axe the Emus, but if Rugby Australia wanted to intervene and assist the Emus to not only stay in the Shute Shield but actually be a force, they could have.

Instead at the time all Rugby Australia CEO, Andy Marinos, did was issue a vague statement about RA still being committed to the region and if one day this much talked-about private equity materialises, western Sydney may get a tiny scrap of the pie, which, let’s face it, the majority will be used to pay down debt and build the Wallabies brand.

Any funds that do go to western Sydney will be largely symbolic to show fans and players that they understand the plight of those further down the M4.

In October 2021, the Emus announced that in 2022 they will be they playing in the John I Dent Cup, which is made up of primarily teams based in the ACT. While this is incredibly hospitable of the ACT and Southern NSW Rugby to allow Penrith to compete in their competition, the logistics of a team based at Nepean Rugby Park playing every second week in Canberra will be incredibly difficult.

What about those who work on weekends? Can they afford to spend six hours travelling for a game of rugby?

The fact that less and less opportunities exist for gifted players in greater western Sydney at present doesn’t seem to bother Sydney Rugby Union, as they feel that the most gifted and keen players will travel to the more wealthy clubs in Sydney’s north and east.

Yet you only need to look at the talent coming through the Panthers system to realise how badly rugby are missing out by overlooking this talent-rich area.

So, in the absence of this much talked about infusion of equity, why don’t rugby look to the Panthers to help keep Penrith playing top-grade rugby in Sydney? Before completely disregarding the idea think of how little downside it has for both parties, and the potential upside is enormous.

The Panthers are a massive organisation that place a huge emphasis on junior development, they have scouts and developing officers all over western NSW and the greater Nepean area, the centre of excellence that all the grades train at is a state-of-the-art facility and the young players are kitted out in fresh Panthers gear as they swagger about the town centre.

Add to that the NSW Government has just approved the building of a brand new stadium in Penrith. So, if Penrith Rugby Union were somehow able to develop a partnership with the Panthers they could tap into these resources.

For the Panthers to be on board the club would possibly have to rebrand themselves as the Penrith Panthers Rugby so they could add another arm to their brand and if they manage to negotiate their way back into the Shute Shield that allows the Panthers to be represented across two major rugby competitions in Australia and further diversify their brand.

For Penrith Rugby, losing the iconic Emus name will be painful but the upside is huge. It opens the club up to the Panthers Leagues Club network of over 125,000 members and an asset network of over $143 million, as well as the profile and recognisability of the Panthers football brand.

Add to that the way players can transfer seamlessly between the two entities and it seems a great fit for both the league and union clubs, opening the Emus to new resources, influence and fans and the Panthers to another asset and an even more diverse audience and playing group. 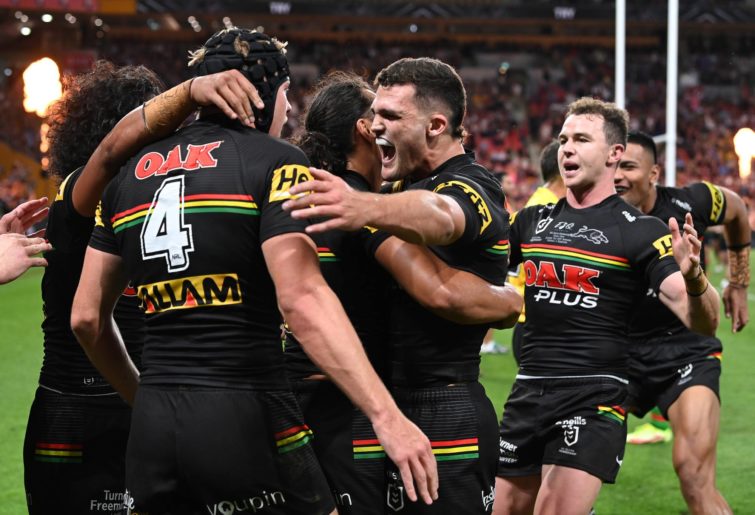 The truth is for rugby to thrive in Sydney it needs to operate better in the west. The culling of the Emus was a terrible decision that needs to be reversed immediately. Yes, the Emus are under-resourced and performed poorly for multiple seasons but a partnership with a sporting organisation like the Panthers can help address these issues.

Considering how rich this region is with Polynesian talent and so many of them have at least a running knowledge of both league and union, this could go a way to Penrith being a rugby powerhouse. For every Jarome Luai and Brian To’o playing for the Panthers, about five or six miss out and they could be playing rugby and remaining in the Panthers system.

Yes, they are sometimes from a part of town that rugby wants nothing to do with but while this does present challenges (as we have seen with the Panthers squad at times), it also creates great opportunities.

Players like Luai and To’o are full of personality and have immense talent and the NRL media laps them up.

Would it be such a bad thing to see players like them playing for their local area in the Shute Shield and getting thousands through the gates to watch them?