Two years after a stress fracture ruined her T20 World Cup hopes on the eve of the tournament, the injury has returned at the worst possible time for the quick.

Scans have shown a stress fracture of the navicular in her right foot, meaning the 23-year-old will miss the rest of the summer.

That will include the remainder of the multi-series Ashes against England, as well as the 50-over World Cup that follows in New Zealand.

The injury is the third hit to Australia’s bowling stocks, with legspinner Georgia Wareham already unavailable for both major campaigns while Sophie Molineux is missing the Ashes.

Opening batter Beth Mooney is out indefinitely after suffering a fractured jaw last week. However, she has since returned to facing underarm throwdowns.

Team doctors are unsure how long Vlaeminck will be sidelined for this time, however, her previous injury ruled her out of cricket for 12 months with some setbacks. 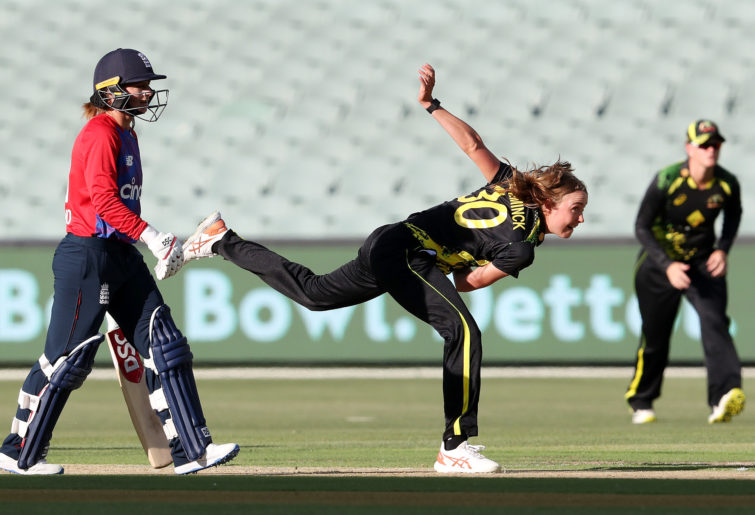 “She had a similar injury in early 2020; this fracture completely healed and Tayla made a successful return to play to international cricket in March 2021.

“Tayla reported a return in mid-foot pain and subsequent images have confirmed a recurrent stress fracture of the navicular.

“She will be unavailable for the Ashes Series and ODI World Cup.”

At her best, Vlaeminck is the quickest bowler in the world and has been tipped by the likes of Mel Jones to be the first woman to crack the 130km/h barrier.

However, her development has been stunted by recurring injuries, including a shoulder issue in 2019 and two knee reconstructions due to ruptured ACLs.

Vlaeminck’s injury will likely see fellow quick Darcie Brown play a bigger role in the Ashes, with Stella Campbell the most likely option to be added to the squad.