What an incredible day of cricket!

Leading into the final day of the women’s Ashes Test at Manaka Oval, the big question everyone was asking was: will we get a result?

With Australia at 2-12 early on day three, England had started to fight their way back into the game.

Then the rain came. Two sessions were lost to rain and many (including me) thought the possibility of a team winning this game was extremely unlikely.

But what a final two hours, and what a performance by both teams. For England to come so close to winning, and for Australia to fight their way back into the game when an England victory was looking likely, both teams gave it their absolute all.

I still need some time to catch my breath after one of the most incredible finishes to a Test match I have ever seen – even though it ended in a draw!.

Here are some talking points from the final day of the Test match.

When Natalie Sciver and Heather Knight were at the crease, I was convinced that England were in the box seat to win this game. But When Knight departed for 48 and Sciver for 58, I wondered if Australia had a sniff.

That led to a rollercoaster final hour, with all the Aussie bowlers playing their part. In particular, Annabel Sutherland was a stand-out, taking three wickets in 10 minutes to dismiss Sciver, Sophia Dunkley and Katherine Brunt.

After the most dramatic hour you could wish to see, it boiled down to this: England needed 12 runs off the final over, Australia a solitary wicket. Number eleven Kate Cross was to face, while young gun Alana King had the ball in hand.

I held my breath for each delivery, but Cross managed to hang on.

Did anyone else find themselves yelling at Lanning to bring the field in that final over?

There have been moments of brilliance for several English players during this Test match, including an unbeaten 168 for Heather Knight, five wickets for Katherine Brunt in the first innings and five catches for wicketkeeper Amy Jones.

So important was Knight for England, that I have no hesitation in declaring her player of the match.

But England also missed plenty of opportunities in the field too and this was again another feature of day four. Over 160 runs were added to Australia’s scores over both innings because of missed catches.

Unfortunately, Jones dropped Ellyse Perry on 30 just after drinks. It was a fairly straightforward chance and England’s first real opportunity to dismiss Perry.

In the 29th over, Perry was dropped again by Jones. Eventually Perry was dismissed on 41, but those missed chances still demonstrated a slight lack of focus from England in the field.

These extra runs may have cost them the win. 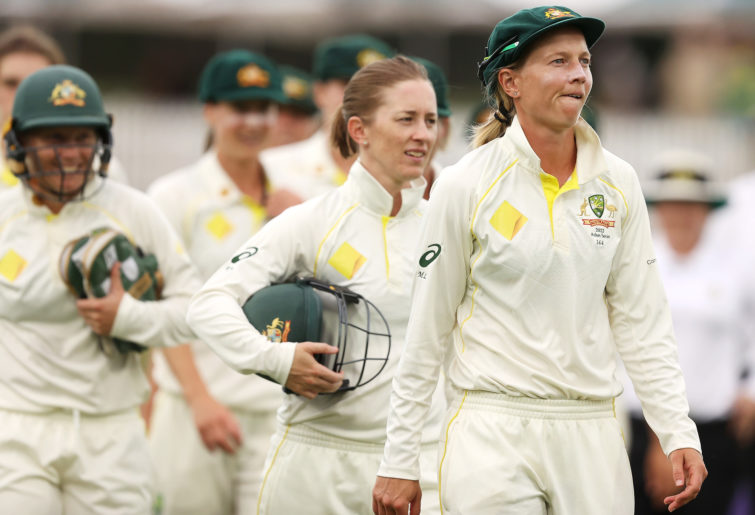 Meg Lanning of Australia leads her team off the field after the Women’s Ashes Test finished in a draw. (Photo by Mark Kolbe/Getty Images)

One of my favourite moments of the day was seeing Mooney score her half-century. I’ve mentioned it several times throughout this Test match, but to see Mooney compete so emphatically and bat with such focus with a broken jaw is astounding to me.

Mooney continues to prove over and over again what a tough competitor she is. She is a player that also struggles with the heat, but rarely lets it impact her game.

One innings comes to mind immediately: when Mooney scored a 46-ball 65 to help the Brisbane Heat achieve their maiden WBBL championship in 2019.

Today’s innings showed again what a competitor she is; in an interview following her innings, the most she could say about any discomfort that her jaw caused her was that it was a bit ‘uncomfortable’.

But she wasn’t done just yet. Mooney took two crucial catches on the boundary to dismiss Jones and Dunkley, the latter particularly outstanding.

Did I mention that she had a broken jaw?

Midway through today, the conversation of pundits and commentators were all about when Lanning should make a ‘sporting declaration’ to give both teams an opportunity to win the match.

Some suggested a lead of 200 was enough. Others thought 300. In the end, Australia made the declaration at 216, requiring England to score 259 runs from 48 overs to win, requiring a record-breaking run-chase from England to achieve victory.

And England very nearly did it.

Had Australia lost this game, it would have raised questions as to whether Lanning declared too early.

But why should it be the responsibility of Lanning to make a sporting declaration in the interests of giving both teams an opportunity to win? The easy option for Lanning and the Australians would have been to bat on, play for a draw and not risk letting England back into the Ashes.

Given the impact rain also had on this game, it again prompts the question as to why women do not play five-day Tests.

The pitch that was prepared for this Test was top notch, while both teams came out with great intent. It seemed that both camps wanted to force the result, rather than play for a draw as has become the norm in Tests in recent years.

I find it deeply frustrating that we constantly talk about the tactics of each of the captains and what they can do to force a result. In the past, particularly in the Ashes Test played in Taunton in 2019, Lanning came under heavy criticism for not playing ‘attacking cricket’.

Some of that criticism may have been warranted. But I think it is extremely unfair that there is so much focus on the players and their tactics, in a format which they rarely play, when a solution is staring us right in the face.

Play a fifth day and take the responsibility of manufacturing a result out of the hands of these talented women.

And whilst we are talking about playing a fifth day, it would be great to see more women’s Tests. This contest was so gripping and I want to see more of it.

With this draw, Australia takes a 6– 4 lead in the Women’s Ashes series. It’s now time for the ODI portion of the tournament where there will be plenty of debate about what Australia’s best team looks like.