Heather Graham has had an exciting start to 2022.

After featuring in the Australia A team which beat the England A team in all three ODIs and the two T20s in February, she soon after found herself on a plane to New Zealand to do a week’s quarantine.

When Hannah Darlington, one of Australia’s two travelling reserve players for the ODI World Cup in New Zealand made the decision to withdraw because of mental health and wellbeing concerns, Graham was called into the squad.

For Graham, knowing she was so close to making the squad pushes her toward continual improvement; but there’s something that pushes her more.

“All this youth is coming through and they really keep you on your toes,” said Graham.

“If you don’t keep improving and evolving your game you are going to be left behind.

“During the Australia A series, we saw so many talented young women shine, especially with the bat, so they are putting the pressure on those of us who are a little bit older to keep improving.”

But one of the strengths of women’s cricket in Australia at the moment, is that while the next generation of talent continues to emerge like Phoebe Litchfield, Georgia Voll and Stella Campbell, the strength of the Women’s Big Bash in particular means that players mid-career continue to improve and put themselves in the selection conversation. 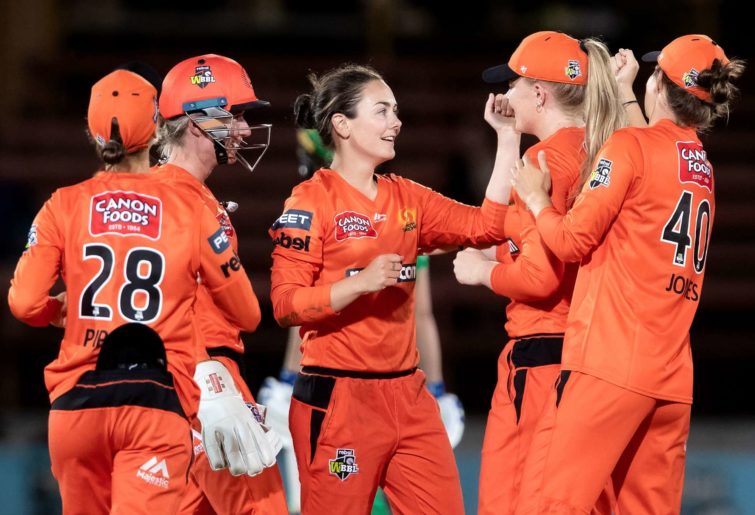 One of those players was Alana King, who made her debut for Australia during the Ashes in all three formats of the game. Graham has had the chance to play alongside King at the Perth Scorchers.

“Kingy has so much experience; she has not only been playing at a state level for so long but has also been part of the National Performance Squad so she has really been able to develop her craft with the ball,” said Graham.

“She is so bloody talented and it is great to see people in the middle of their career getting the opportunity to represent Australia.”

Another player that was dominant during the recent series against India and England was Tahlia McGrath, who was player of the series in both.

After making her Australian debut back in 2017, McGrath then spent some time out of the national squad before being awarded a central contract by Cricket Australia ahead of the 2020-21 season.

Leading into this season, McGrath has had some personal challenges but has also committed deeply to her own development, working closely with mindset performance coach David Steventon, who conducted some sessions with the South Australian Scorpions and additionally she has participated in a leadership program with Belinda Clark.

When the conversation about equality for women in sport takes place, so much of that takes place in the context of pay. But true equality is about much more than that and ensuring women have all the necessary supports to help them succeed on the field, whether that be medical, personal development or access to facilities.

“Cricket Australia and the Australian Cricketers Association are putting in a lot of funds for work off the pitch,” said Graham.

“We have had good access to sport psychologists for a while now and we can tap into them and learn.

“The work that Tahlia has done has obviously helped her game immensely and you can see how much she is loving playing cricket, if it’s not for the Scorpions or the Strikers, it is for Australia.”

Given that Graham has been included in the squad as a travelling reserve, she isn’t banking on getting the chance to play this series, but her key focus will be to help the team succeed however she can.

“My main goal is to try and bring energy to the group through the tournament,” said Graham.

“It’s long, it has its ups and downs and I want to help out whenever someone needs it.

“The more the merrier when it comes to helping, the key is making sure the team are ready to go on the field.”

During the Australia A tour, Graham had plenty of time to interact with some of the younger players, who she admits bring a joyful buzz to a team. One of the things the younger players did was each day leave a note with a chocolate or a rose outside each team member’s door.

I suggest that perhaps that’s a strategy Graham could employ to help the squad out while in New Zealand.

She giggles and then responds: “I’m not sure I’m that nice.”