Raw passion. Heat, more than light. No holds barred in a back-alley brawl. Those are just some of the associations which appear on the horizon, at the dawn of any tumultuous local sporting derby.

Derbies tend to acquire a life of their own and create their own special vocabulary. City and United, the Old Firm, El Clásico, or even the Superclásico. A sporting community splits along the fault-lines of geography, class, faith or even a sense of greater national identity, and the two tribes go to war. Something ancient stirs in the depths of blood, and cannot be denied.

In Australia, the call comes in the form of State of Origin. It is a call which challenges and tests the roots of identity in the two major rugby-playing states of New South Wales and Queensland: Sky Blue or Maroon? Relatively few have the guts to swap lineage, and exchange one colour jersey for the other in the course of their rugby lifetimes. The history just runs too deep.

The latest instalment arrived in the Super Rugby Pacific encounter between the New South Wales Waratahs and the Queensland Reds at the Leichhardt Oval last Friday evening. It was a contest which largely lived up to the billing, despite heavy rain which eventually swamped the lineout mechanics of both teams in the second period and made constructive attacking play difficult to achieve indeed.

The Reds came out on top, courtesy of a magnificent, game-long defensive effort. The raw stats say that the Waratahs hogged possession of the ball. They made twice as many passes and had three times the number of clean breaks; they beat five times more defenders than their opponents and dominated two thirds of the territory, forcing Queensland to front up for 200 tackles.

The Reds stayed with the formula which won them the Super Rugby AU 2021 title, only to come apart in dramatic fashion when exposed to the keener cutting edge of New Zealand return teams in Trans-Tasman competition. Queensland kicked a lot, more than any other Australian franchise last season. On Friday evening the Reds kicked on 33 occasions, six times more than the home side.

They also tend to kick infield whenever possible, and rely on their chase to do the business thereafter. The domino effect is great pressure on the aerobic capacity of their forwards, particularly in the back five. They have to be able to cover large swathes of ground while retaining the ability to make effective tackles at the end of the process.

They also have to be able to do their core jobs at the set-piece, and that is where the problems of balance in selection start to become acute. Brad Thorn has picked out Angus Scott-Young as his best lineout caller, but the Scott-Young lineout only ran at a 75% retention rate in 2021, and is currently languishing at 69% after two games this term. Those are below-average figures.

Scott-Young has to start, and so does the club captain Liam Wright. Wright and Lukhan Salakaia-Loto between them provided two thirds of all the Reds’ lineout ball last season. With Harry Wilson at number 8 and Angus Blyth in the second row alongside Lukhan, that leaves no spot for the impressive young open-side Fraser McReight, who covers the most ground, and has the greatest range of any forward available among the Reds back five options.

Captain Tate McDermott was rightly proud of his team’s resilience after the game, but when you pare away the media-speak his comments also spoke to the underlying problem:

“The past couple of years, that’s been our DNA, showing up for each other in those tough times. I think we probably spent a minute in their 22, our attacking zone, so I’m just proud of their efforts.

“We speak a lot about boys not switching off on the inside and there’s boys flying through and covering other boys’ missing tackles, and there wasn’t too many of them either.

“So, I’m over the moon with that defensive effort. Obviously, there’s always room for improvement, but just the character the boys showed was impressive.”

If Queensland were unfortunate to lose the services of their outstanding tight-head Taniela Tupou in the warm-up before the match, they were equally lucky to have Fraser McReight as a replacement for Liam Wright from their original selection. McReight was the best Queensland forward, with a game-leading 21 tackles, three turnovers and one fumble recovery to his name.

This sequence comes after seven phases of a New South Wales return from a Tate McDermott box-kick. It illustrates the pros and cons of ‘the Queensland dilemma’ in a nutshell: 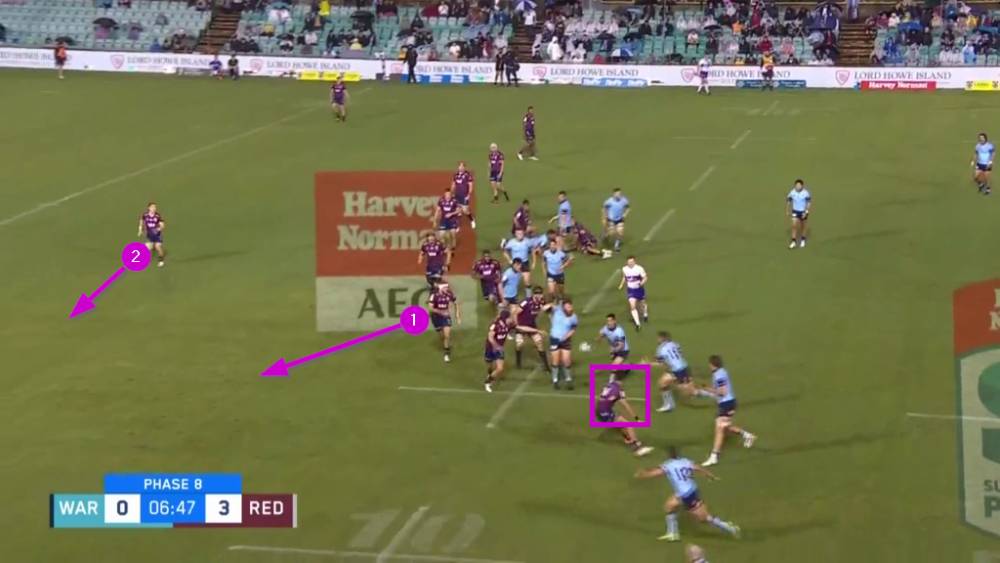 The defence at the line is ordinary, with wing Jordan Petaia over-reading the play and blinking in his individual poker game with the passer, Waratahs’ number 12 Lalakai Foketi. But the Reds’ defence quickly shifts up a few gears, from mediocre to outstanding, when McDermott and McReight are involved in the scramble to get to the ball after the break is made. The scrum-half makes the tackle and McReight mops up on the floor to win the turnover penalty.

This is second phase from another kick return. Another double pump by the passer (the Waratahs impressive number 10 Ben Donaldson) pulls the other Reds wing, Filipo Daugunu, into a poor tackling position on the receiver Izaia Perese. The first line is broken but the scramble goes up a notch, with the same key figures in the picture: 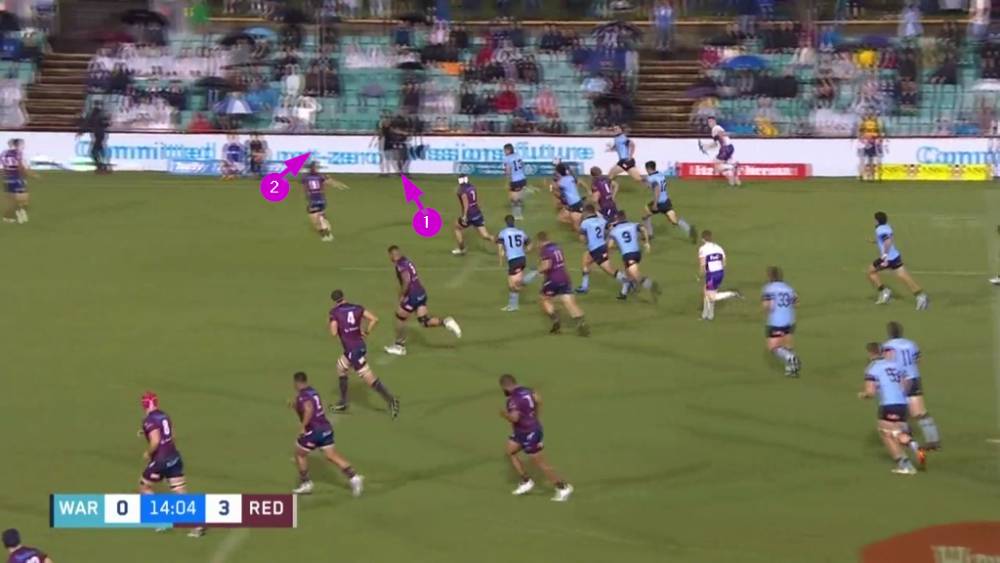 McDermott makes another superb cover tackle, and this time the side-line does McReight’s turnover work for him as Perese is forced into touch.

In the next example, it is second phase after a clearance kick by James O’Connor. Poor co-ordination at the line between Harry Wilson and Angus Scott-Young allows the mini-break by Will Harris, but Fraser McReight is ready to save the day in the second line of defence:

If the Reds’ young number 7 does not force the fumble, he will win the ball back on the deck on the very next play.

Even with McDermott off the field injured, the intent behind the Queensland scramble defence remained:

Fraser McReight makes the first tackle in midfield, but he and replacement scrum-half Spencer Jeans are both back in the scramble defence by the time Dylan Pietsch heads for the corner flag. Neither completes a tackle, but Pietsch is forced inside and away from the danger area, and the Reds live to fight another day.

In just one long pick and go sequence midway through the first period, McReight made two tackles and four jackaling attempts in the space of just under one minute and nine total phases of play. Here is the finish:

McReight is in on-ball at two consecutive rucks in the shadow of the Queensland posts, and at the end he is winning turnover but for the failure of Dane Zander to roll away from the New South Wales side of the tackle. The Reds give up the three, but the open-side flanker has probably saved the full seven pointer in the process.

It was not the only time that McReight disrupted the Tahs’ efforts to pick up metres close to the ruck:

Typically, the Reds like to refuse their number 7 behind the initial contact at the tackle, with McReight ready to pounce on any looseness at cleanout time:

He was still going strong in defence of kick returns, and on kick chase deep into the second half:

The Reds are still winning their matches in domestic Super Rugby, just as they did in 2021 – but they are no closer to solving the riddle of how to build a back five unit that can cope with the double demands of winning lineout ball, and covering the ground in kick chase defence. If they don’t find the answer, the cross-border matches against Kiwi teams will come as a trumpeting wake-up call – one just as rude as in Trans-Tasman one year ago.

The best lineout has to contain Liam Wright in the back row, in order to move within even distant earshot of respectability. Equally, the kick chase and scramble defence need Fraser McReight as a central component in their make-up, to fill the spaces that inevitably develop in the Reds’ first line of defence.

The Queensland coaches have to work with the resources at their disposal. As France defence guru Shaun Edwards recently commented in conversation with England World Cup winning coach Clive Woodward:

“With Wales we always had two natural open-sides on the pitch and sometimes the entire back-row were natural opensides because we were just blessed with those brilliant players and we wanted them on the pitch.

“Then I arrived at France and we probably haven’t got one natural open-side or jackal pressing for a start at present, although we compete hard at every breakdown. Our back-row boys have different talents – they are fantastic athletic ball-carriers, good in the lineout, strong tacklers.

“As a coach you must always be willing to adapt. Exeter won an incredible League and European Cup double last season and I would argue their first-choice back-row probably lacks a natural seven and jackal. So be it. You concentrate on the qualities of the players available at the time.”

Whoever the Reds pick, Fraser McReight has to one of the first names on the team sheet. You focus on the qualities of the players available at the time, and you find the right blend. If that means Liam Wright and Fraser McReight on the pitch at the same time, so be it.

Harry Jones joins Brett McKay on the pod from France where’s he’s been checking out the RWC favourites, as well as some disturbing news for travelling fans. Meanwhile, Kiwi writer Jamie Wall gives his verdict on Roger Tuivasa-Sheck’s debut and a grim verdict on the Waratahs.