Coach's Corner: Who are the movers and shakers in Super Rugby?

Welcome to the first edition of Coach’s Corner in 2022! First things first: there is a new feature on Fridays, and that is My Australian team of week. Here it is for round two of Super Rugby Pacific:

Okay, so that is out of the way. Plenty of questions circling around how potential young Wallabies should be managed, and prepared for Test rugby – especially when some key starters are plying their trade overseas and their availability is uncertain.

Rugbyrah touched on the question of overseas availability, and how to fit four or five top overseas players into the new three-man rule:

Jeznez immediately flagged up that “Marika Koroibete at 11 is one hell of a player to leave out.”

To remind ourselves of the platform for the debate. Tim Horan commented in a Tweet that Force number 10 Reesjan Pasitoa should be immediately promoted to the first Wallaby squad of 2022

“Reesjan Pasitoa has to be in the Wallabies squad in 2022. Early days I know, but he is a future star. At 20 years old….the time is right,” he said.

“In all seriousness, forget about young Pasitoa, let’s have a think about Noah Lolesio, or Quade Cooper, or James O’Connor, or these guys who are in situ right now, and give them the confidence to play.

“This lad (Pasitoa) is good – he’s got time on the ball, he’s getting the ball on the run so he’s drawing defenders even before he has the ball, you can see he’s got that ability. But let him really stamp his authority to become a top player in Super Rugby, with the Western Force.

“Then inject him into the Wallabies as a player who will make a difference from the off, instead of making him go in there and maybe struggle for a bit, and come out and earn his stripes.”

My own opinion is much closer to Michael Cheika’s than it is to Tim Horan’s. Firstly, it is good to remember that Tim Horan comes from the pre-professional era, in which it was still possible to pluck the Phil Kearns and Tony Daly’s of this world from the obscurity of club rugby and forge them into international players.

Cheika is a professional coach who has probably learned his lesson the hard way. He introduced the likes of Ned Hanigan too quickly to international rugby and Hanigan looked lost for a couple of seasons – fortunately he has been able to rewind and recover.

Pasitoa has shown some nice touches, but no more than that. He has not been as influential as Ben Donaldson at number 10 has been for the Waratahs so far, and he has done nothing to suggest that Quade Cooper and James O’Connor should be uprooted as the top two choices at number 10. Those would be the top three outside-halves at present.

Dave Rennie will be fairly certain of the first 25 players or so in his World Cup squad. It will be a question of filling the remaining gaps with players who can add extra value or a USP.

Two of those players are playing for the Force, who along with the Waratahs look like the biggest improvers of 2023. One is scrum-half Issak Fines-Leleiwasa, who made a startling contribution off the bench against the Rebels.

Assuming that Nic White ana Tate McDermott will be the top two choices for the World Cup, Issak Fines-Leleiwasa can offer real impact off the bench with his razor-sharp footwork and acceleration:

It is always one of the hardest tasks to work your way back infield off a side-line. On two phases out of three ILF stops the inside three defenders dead in their tracks, which means they cannot lead the defensive line forward with any speed or momentum.

His sharpness in and around the base of the ruck provides the energy you want injected into your attack in the last 20 minutes of the game:

In the first example, he draws a yellow card on Reece Hodge for a deliberate knock-on, in the second he sets up the final score of the game right on the hooter.

Another player who should come into the reckoning for one of those final spots in the World Cup squad is ex-Sevens star Tim Anstee. He has improved his level of physicality and tight ball-carrying, he has won two turnovers on the deck in the first two games, and crucially, he can win lineout ball on both sides of the throw:

The sheer footballing intelligence in that second example is exactly what the Wallaby coaching staff should be looking for. When the intended maul breaks up, Anstee immediately makes an adjustment, taking the ball through the line himself, releasing on the ground and picking it up again to drive over for an outstanding try.

The importance of ‘earning your stripes’ at Super Rugby level has been underlined by the development of young Angus Bell in New South Wales. Bell has endured some difficult moments indeed against both Taniela Tupou and Feao Fotuaika in the scrums in recent times, but at the weekend there was only one boss:

The big change is Bell’s long left arm bind. It reaches all the way down to Fotuaika’s hip, and that keeps his back straight and the forward drive low and powerful.

Lots of interest too, in France’s progress in the current Six Nations. Mused6 talked in glowing terms about the impact of the French number 8 Gregory Alldritt, while Ozinsa added “He’s a beast. Best 8 in world rugby right now, hands down.”

Oz also commented on the efficiency of the French backs in contact, asking: “Is it a product of coaching and the way they want to play, or have they chosen players who fit a mould?”

France have scored six tries from counter-attack (four more than anyone else) and 10 of their 13 scores have come within one or two phases. So, they need to get the opponent to give them the ball, either via the boot or through breakdown turnover.

Their 17 turnovers at ruck time are spread across nine different players, and three of those are backs (centres Gael Fickou and Jonatahn Danty, and left wing Gabin Villiere). Danty was a massive on-ball influence in the 2021 July series between Australia and France.

Possibly with tongue firmly in cheek, Just Nuisance predicted an England victory in Paris at the end of the tournament, while both JD Kiwi and The Neutral View from Sweden observed a similarity between Les Bleus and a good All Blacks side. That probably comes from the desire to attack from changes of possession (a New Zealand hallmark) and with strong ball-handling contributions from all 15 players.

Let’s look at the involvements of French prop Cyrille Baille in two of France’s early scores against Scotland:

Everyone can see Antoine Dupont’s brilliance on the counter, but Baille’s involvement is less visible, and every bit as important: 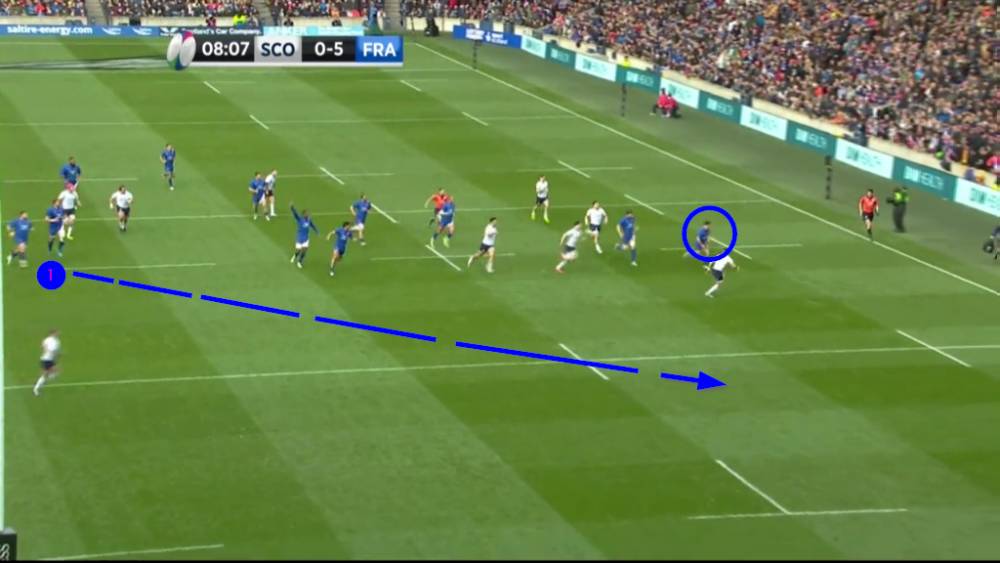 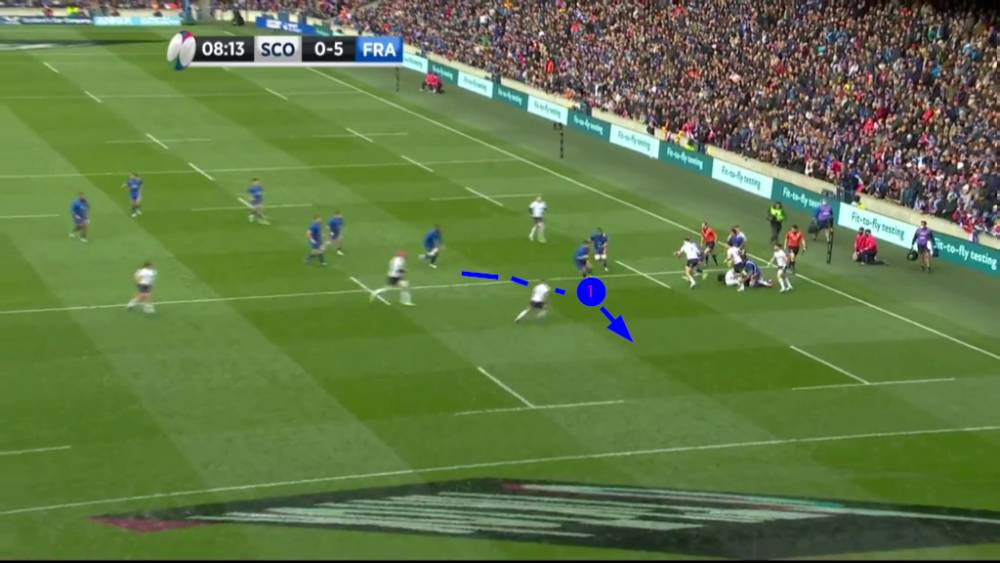 Baille does not run straight upfield in his midfield channel, he crosses to the far side ahead of five other French players in order to become principal receiver at the ruck after Dupont is tackled – the precise location where France want him to be.

Despite multiple offloads, the Scotland defence is still in good shape when the ball reaches Damian Penaud on the right side-line. The decisive intervention is made by Baille, running from midfield out to support his wing and received the offload, before making the critical assist just before he is forced out into touch himself.

Many thanks to all who asked a question, or helped develop the debate on the forum!