The Roar
5th April, 2022
77
Join the conversation
3634 Reads
Advertisement
Write for The Roar

French outlets reported the Kiwi born 26-year-old, who was capped twice by the Wallabies, is set to join after the current Super Rugby paciofic season.

He featured in Wallabies squads last year without doing enough to force his way in Dave Rennie’s plans.

Simone, a former NZ under 18s rep, played for the Waratahs before joining the Brumbies and had a short stint with NRL club South Sydney.

Tuaina Taulima has been suspended for three weeks after his guilty plea and previous clean record helped reduce his penalty after his red card cleanout on James Slipper last weekend.

Taulima was guilty of contravening Law 9.20: Dangerous play in a ruck or maul, and has been suspended until April 29.

He was sent off seven minites before halftime in the Reds’ 21-7 win over the Brumbies at Suncorp Stadium. 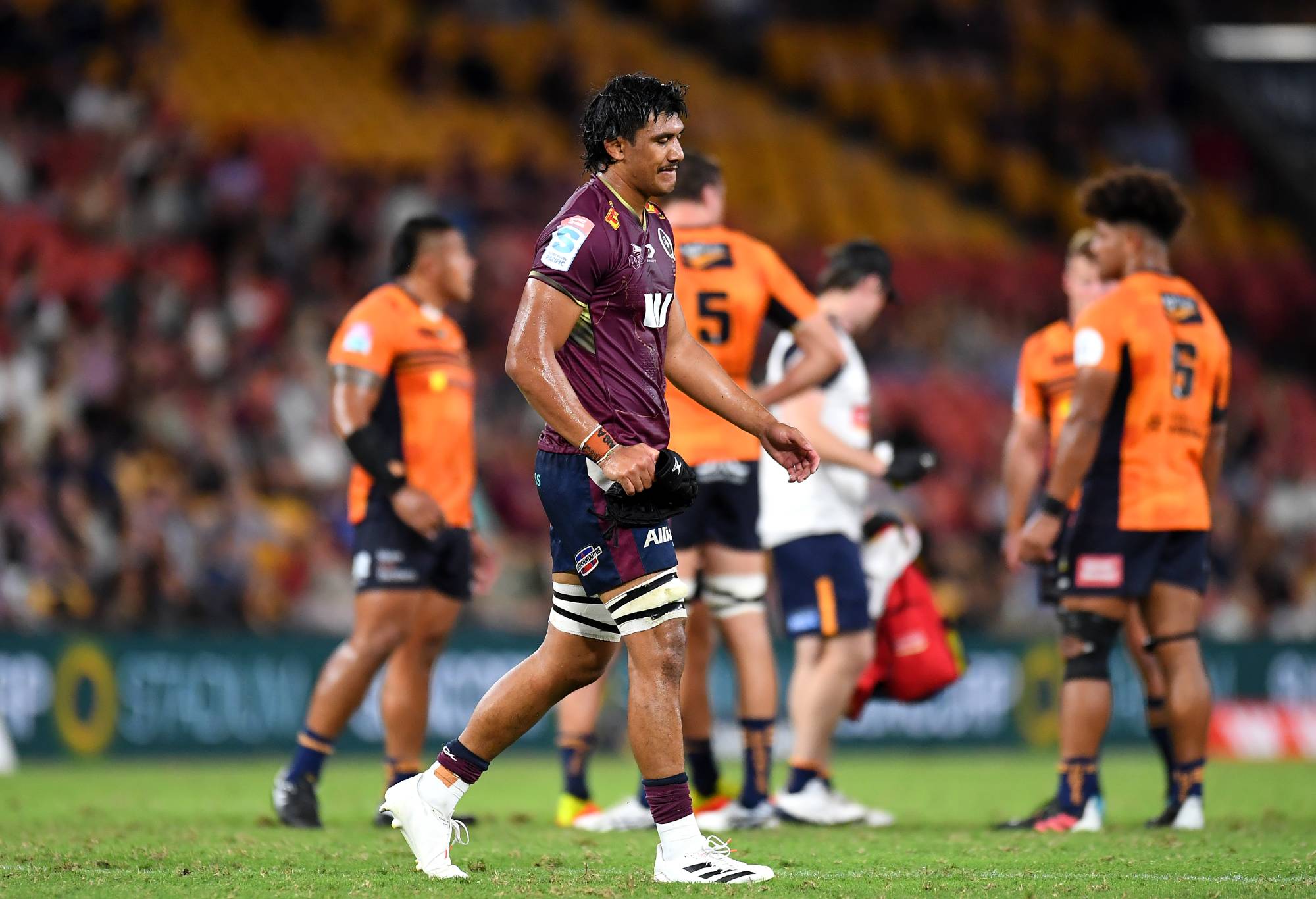 Tuaina Taii Tualima of the Reds leaves the field after being shown a red card. (Photo by Albert Perez/Getty Images)

“Having conducted a detailed review of all the available evidence, including all camera angles and additional evidence, including from the player and submissions from his legal representative, Mark Martin QC, the Foul Play Review Committee upheld the Red Card under Law 9.20.

“With respect to sanction the Foul Play Review Committee deemed the act of foul play merited a mid-range entry point of 6 weeks due to the World Rugby instructions that dictate any incident of foul play involving contact with the head must start at a mid-range level. Taking into account mitigating factors including the Player’s clean judicial record, his acceptance of foul play and his expressed remorse, the Judicial Committee reduced the suspension to 3 weeks.”

Meanwhile Crusaders’ Shilo Klein also received a three week ban after pleading guilty to an incident contravening Law 9.13 – “A player must not tackle an opponent early, late or dangerously”.

The replacement hooker was sent off late in the win over Highlanders game for a dangerous tackle on Ethan de Groot.

And Blues winger Caleb Clarke has challenged his red card and will face the judiciary on Wednesday night.

He was sent off for an aerial challenge on Moana Pasifika opposite Tomasi Alosio at Eden Park on Saturday.

Fergus Lee-Warner will depart the Western Force at the end of the current Super Rugby Pacific campaign to join Worcester Warriors, tjhe club said in a statement

Lee-Warner will be making the move overseas to the English Premiership side after five memorable seasons with the Force.

Having joined in 2018 during a transitional phase for the club and playing in the National Rugby Championship (NRC), World Series, Global Rapid Rugby competitions before being reintroduced to Super Rugby, Lee-Warner has been a significant part of the club during his time in Western Australia.

The powerful second-rower, who has played as a flanker and lock, was part of the title-winning 2019 NRC Force side and won the coveted Nathan Sharpe Medal (club Best and Fairest) in 2020 following an outstanding first season in Super Rugby.

Lee-Warner praised the Force faithfully for their unwavering support.

“I’ve loved my time here in Perth and it’s been amazing to play in front of the Sea of Blue for the last five years,” Lee-Warner said.

“Perth has become a home away from home and I’m sad to be leaving after making some incredible memories including that first World Series game against Fiji.

“I’d like to thank Hodgo (Matt Hodgson) for giving me the opportunity to play professional rugby. I was playing club rugby in Sydney before I signed with the Force in 2018, so I can’t thank him enough.

“I wouldn’t be where I am today without Andrew and Nicola Forrest’s support of the Force and all that they’ve done for the club. A huge thank you to Sambo (Tim Sampson) who has played a crucial role in my development, as well as Van (Humphries), Nick Hensley, Anthony Cutrupi, Paul Tito and Mark Ozich.”

“Fergus has been a fantastic player, character and person at the Force. It’s been a pleasure to have him at the club,” Lewis said.

“Having developed his game at the Force, his performances, according to a number of pundits, have been deserving of a national call-up. We as a club are devastated and very disappointed to see Australian talent leaving the country.

“On behalf of the entire organisation, I’d like to thank Fergus for his five seasons at the club and wish him all the very best on his new adventure in England.”