To you suckers who continue to follow this series, together we’re stumbling on from the homage paid to the 16 westerners and their conspiratorial theoretical link to the No. 16.

We now offer more homage to those West Aussies who were involved in one or more of Australia’s five – count em, five – ODI World Cup final victories. They deserve a homage of their own.

Australia’s five World Cups came in 1987, 1999, 2003, 2007 and 2015, and during each of those five, one or two West Australians were hugely influential – except Adam Gilchrist (Non-Ronchi), who consistently disappointed, especially since he could have moved to ODI opener in his 16th game and not leave it till his 18th. So selfish.

Don’t believe that Western Australia were hugely influential? Well, I’ll have you know in Australia’s five World Cup victories, a West Australian has been involved in the highest partnership in four: Geoff Marsh in 1987, Adam Gilchrist in 1999, Damien Martyn in 2003 and Gilchrist again in 2007.

And let’s not forget the first-ever World Cup wins for the Aussies were coached by West Australians: Bob Simpson in 1987 and Geoff Marsh in 1999.

Do you want to know what else – why we lost to Sri Lanka in the 1996 decider? Not one WA player was picked in the entire squad, let alone the final. Marsh was coach, but that doesn’t count. What a sick joke. We may as well not have bothered turning up in the first place.

A World Cup-winning XI of WA-only players would be very strong and more than competitive against competitive international teams, which certainly rules out minnows England, who would be rubbish.

TC means it’s Tony compliant, including for those who played in multiple finals – that is, they were selected in this team in the batting position they played in one or more World Cup final.

Gilchrist is the second-choice keeper/batsman in this team. A measly top score in two of the three finals he played, including 149* in 2007, which only just pips Pakistan’s total in 1999. Just how bad was Gilchrist in World Cup matches? Terrible: 54 (36) in 1999 as Australia mowed down the aforementioned Pakistan total. Andrew Zesers could have done that. Or look at 2003, when he managed a scratchy 57 (48) before Damien Martyn rescued the innings. Gilchrist was also known for his poor sportsmanship and abandoning glorious NSW. 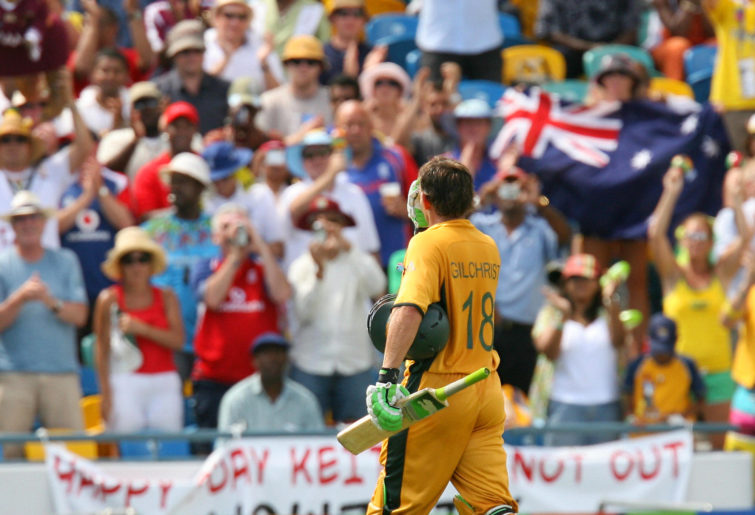 Swampy put on 75 with David Boon – their sixth 50-plus partnership of the tournament – before Neil Foster got through him. Not surprising – I doubt Swampy ever drank a Foster’s in his life. He was also the first to win the World Cup as a player and as a coach.

After underperforming in three prelim games – ten runs, no wickets – and with Mark Waugh and Simon O’Donnell preferred in the 1987 decider, Long Tom wasn’t sure he would get another chance. Certainly Moody’s performances in those games were less than Zesers, who was disgracefully overlooked in 1987 for Craig McDermott. But 12 years later, the Long One took 2-17 off five overs bowling second change – just rewards for the Adelaide-born all-rounder.

Marto’s partnership with Ricky Ponting in 2003 is so legendary it’s Mike Velettaesque. Marto slapped 88 off 84 as they plundered 234 from 39 overs and 109 from the last ten. He played with a busted index too. It was a real vindication for a sensational cricketer who was moronically blamed for the Test loss to South Africa at the SCG in 1994.

Can you even remember the bloke they should have nicknamed ‘Shameless’ playing in a World Cup final? Or even his equally non-nicknamed brother ‘Brazen’? Me neither. But there was good ol’ Shameless in 2007 due to come in next after New South Welsman Michael Clarke. So one World Cup final, no runs, no wickets, no catches. In doing so, Shameless joined New South Welsman Michael Bevan in that illustrious group who achieved the feat twice, in 1999 and again in 2003. And Gilchrist in 2015, I guess. Nothing shameful about that.

Also known as the Maltese Capital or Kevin Kline. Everyone knows this one: in the 1987 World Cup final the Capital and NSW player Allan Border put on 85 in the last ten overs. The Capital’s strike rate of 145 in an ODI by today’s standards is very good. In a World Cup final it’s outstanding. In 1987 it was out of this world. Mike. Drop. Jaw. Drop. Herschelle. World. Cup. Dropped.

Oh yes, he does qualify, absolutely. His 0-4 and no dismissals for New Zealand in 2015 certainly contributed to Australia’s triumph. An even bigger certainty is that New Zealand’s Test championship some six years later has his gloved fingerprints all over them. Some would argue that Ronchi is Australia and NZ’s best-ever World Cup final wicketkeeper-batsman. I sure would.

He was about 45 when he played in the 2003 and 2007 deciders. He did well too, picking up Yuvraj Singh in 2003 and then snared Kumar Sangakkara (54 off 52) when the champion all-rounder was threatening to Veletta in the 20th over in 2007. The left-arm unorthodox of ‘the Swine’ was beautifully balanced by his right unorthodox tongue.

He had the best bowling figures in the 2015 final, with 3-30 off nine. This hugely undervalued effort included the prized scalp of Kane Williamson for a dozen and a remarkable 34 dot balls. He finished on top, as it was to be his last ODI before retiring.

Look, here’s a Kiwi who had a short international career, but it included playing in a World Cup final winning squad in 2007, a winning Ashes Test (including in the match of Shane Warne’s ball of the century on his debut) and as a key cog in the Frank Worrell-winning pace attack of 1995. The fact he didn’t play in a World Cup-winning final doesn’t diminish those achievements one bit. He would have joined Brazen and Bevo in contributing nothing to runs and wickets or the score while playing in a World Cup final. The face is that BJ should have been there for the purpose of eligibility in this team, so he’s my honorary selection. He also ages like Chuck Norris.

Considering New South Welshmen Border and Waugh took four of the eight English wickets to fall and another two minnows were run out, it’s hardly surprising that the 16-foot-tall, 16-kilogram lefty didn’t take a wicket in the 1987 decider. A return of 0-43 were lean figures from a lean man in the first-ever World Cup played away from the minnows home turf. Reidy also caught Phillip DeFreitas on 17 (ten balls), who was starting to look Mike Veletta-level threatening.

A super-strong batting line-up, with Swampy playing the long game, and plenty of big bash in the juicy middle. The Capital and Shameless would up the scoring rate with hustle. Ronchi and Julian bring the bang at the death. BJ at No. 10 (for TC purposes) just shows how much depth there is.

The bowling options are plentiful. Johnson and Reid to start off. The Long One and Chuck Norris to share the boring middle overs and The Swine to whirl away. As a team, I’d score it 16 out of 10.

Next up I’m looking at an all-star ODI XI to take on this WA World Cup-winning team, but with one condition.