'Small' NRL clubs may not get close calls, but their coaches don't get calls for their heads either

“It’s about us not being one of the big clubs and not getting anything,” Justin Holbrook lamented a few weeks ago following his side’s 32-28 loss to Parramatta.

It was a fair enough complaint and one that has been pulled apart over the subsequent weeks as more and more people come to the conclusion that the likes of the Storm, Panthers and Roosters are more likely to get the rub of the green than, say, the Knights, Titans or Raiders.

But here’s the other thing that happens when you’re at a ‘small’ club.

After the Knights’ woeful loss on the weekend to the Eels, the Sydney Morning Herald ran a headline that read in part: “Ponga under pressure”.

The Titans’ spanking at the hands of the Cowboys was written up on Fox Sports with a header that included “Fifita gamble backfires”.

As for the Raiders, their 36-6 belting courtesy of the reigning premiers was somehow a story about how the Panthers faithful gave the Canberrans a bit of stick by mimicking the Viking clap – or, as Fox Sports called it, “the Raiders’ infamous prematch ritual”.

(I used this quote because it’s a pet peeve of mine that people use “infamous” this way, having seemingly learnt the word from Ned Nederlander in The Three Amigos – “In-famous is when you’re more than famous!” For the record, it means evil or disreputable, and I don’t think a clap is anything quite so sinister.)

Let’s look a little closer at these narratives.

Kalyn Ponga has just signed a five-year deal worth somewhere between $5 million and $6 million. Other than Nathan Cleary, he’s the player with the least pressure on his shoulders in the entire game – the Knights can lose every game between now and the end of 2027, and as long as KP keeps turning up to training and on game day, he’ll bank his cheques.

David Fifita is the ultimate lightning rod for criticism, basically because he’s not Payne Haas. But he’s never advertised himself that way. He’s an attacking freak who scored the most tries of any forward in the league last year and is averaging a more-than-respectable 123 metres per game this season.

As for the Raiders getting mocked by clapping? In the words of Ricky Stuart, “F*** me dead.”

None of these players or the actions of opposition fans are the root of the problems for these clubs.

Now, I’m not necessarily saying their coaches are, but Adam O’Brien, Stuart and Holbrook are in charge of teams that are all 2-5 to start the season, and all are looking worse as each week goes by.

The Knights started with a bang, defeating the Roosters and Tigers in successive weeks by a collective scoreline of 46-10. Since then they have lost five matches on the spin, scoring 44 points in that period – and being held tryless twice – while conceding 146.

Can’t put on points, can’t help but ship them. Doesn’t seem exclusively like a Ponga problem. 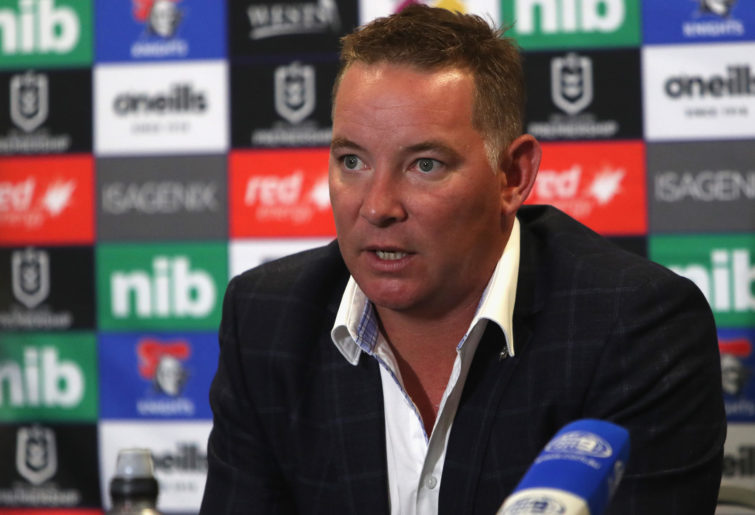 The Titans have at least been in the contest for all of their matches until last weekend’s 30-4 humiliation, but that’s purely from a scoreboard perspective. They are the most inconsistent side, going on runs where they look the most dangerous side in the comp and then morphing into a pack of disorganised children, often in the space of ten minutes.

As for Canberra, the ‘faders’ tag may be lazy, but you can’t say it’s primarily based on the fact it rhymes with Raiders – it’s been thrown around for the last two seasons because they keep blowing leads. They are a far cry from the side that went on a dream run to the 2019 decider.

Reckon it’s all the result of teasing applause?

Maybe these three sides are struggling because their coaches are devoid of ideas. But that’s not a discussion we have, because the mainstream rugby league media doesn’t trouble the coaches of ‘small’ teams.

But you know who’s in trouble? Trent Barrett and, until barely a week ago, Michael Maguire.

Because while they may not be the biggest clubs in the league, the Bulldogs and Tigers are Sydney-based and therefore get slammed when they aren’t knocking on the door of the eight.

‘Madge’ even made a joke about it in his press conference after the Wests Tigers got a win over the Bunnies last Friday night, saying to the assembled media, “I think we need to thank you guys” because the criticism they had copped had “brought this group together”.

Braith Anasta had the gall to take the gratitude, saying that he and fellow NRL360 host Paul Kent “can take a lot of credit for this one” because they are both frequent roasters of Sydney teams but don’t bother getting stuck into the gaffers of the teams from out of town.

For my part, I occasionally get a bit of heat in the comments here on The Roar for my Newcastle focus.

And yes, I pay a little extra attention because it’s my town and my team.

But you know why else I do it? Because practically no-one else does!

Now that the Ponga family have committed their future, the circus rolled out of town. It’ll make a brief stopover on the Gold Coast toward the end of the year as Fifita’s contract inevitably becomes a topic of conversation, but that’ll be as long as it lasts.

And there’s really only ever attention on the nation’s capital when a Pom gets ‘homesick’ (read: thirsty for more money).

Otherwise the media’s focus is on praising the ‘big’ teams for their professionalism when they win and destroying coaches’ careers when they are on the slide.

As for what I’d like, maybe just a bit of balance.

You know who deserves to have some questions asked of him at the moment? Adam O’Brien. Sure, he’s got a pretty full casualty ward, but if you actually go through the 17 that faced the Eels on the weekend, apart from Jayden Brailey’s absence, you could make the argument it’s a full-strength side. It certainly wasn’t so weak as to lose in the circumstances they did.

Ditto Holbrook, who somehow continues to be regarded as having the potential to be a coaching great when in Australia he has a 40 per cent winning record, which is propped up by the fact he made the finals last year in a losing season.

As for Stuart, he may be a legend of the game, but he last won a competition 20 years ago. That’s a long, long time between drinks.

Meanwhile, maybe Trent Barrett and Maguire could do with a bit of a breather from the relentless criticism they cop. It’s not the strongest argument, I’ll concede, but someone’s gotta come last, and when it was the Knights under Nathan Brown the narrative was just, “Well… yeah”.

But then, of course, why would we get stuck into Nathan Brown, who’s got a success rate of 28 per cent since returning from the Super League?