'Playing too well to leave out': The Wallabies selection headache forced by McReight's great leap forward

The first weekend of trans-Tasman rugby is behind us already, and even if the results went in pretty much exactly the direction they were expected to, it was no less enjoyable a weekend of football.

I suggested this time last week that keeping the scoreboard ticking for the Australian sides was going to be even more crucial this weekend than ever, and all our sides saw that benefit for themselves.

The Waratahs, despite their front row being shredded for personnel within the opening couple of minutes, found 24 of their 27 points between the 28th and 51st minutes to pull the Chiefs back to 30-27.

Game on, you might have thought, all things being equal.

But among the Waratahs’ many issues on the night only once in that 23-minute period were they the next team to score. The Chiefs found 21 unanswered points in the last 23 minutes themselves, just to underline this point, and served with a side dish of momentum.

Even the Drua did well to stay with the Blues, and they never went more than 22 minutes between scoring themselves. Their problem was that the Blues never waited more than 14 minutes.

The Brumbies always scored next after the Highlanders scored. Every time. And twice they scored next after scoring themselves, which even with their increasingly regular mid-game error patch allowed them to control the game best of the Australian sides.

At 17-0 after half an hour, they should have been looking to put the foot on the throat. Instead they blinked. 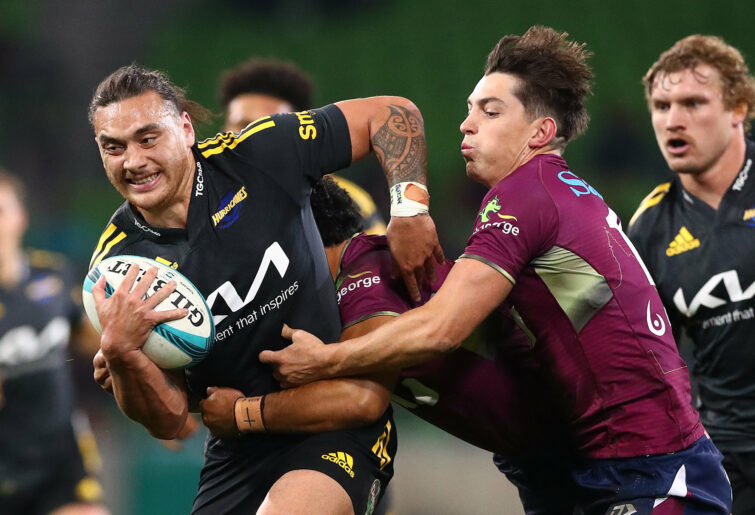 Way too many of them forgot about the ‘knock the ball forward’ part of the deliberate knock-forward law (11.3), and whatever your thoughts on whether what is essentially a cynical play deserves the benefit of the ball not travelling forward, all the Reds players standing there with their arms out as Bailyn Sullivan ran away with the ball in the opposite direction had forgotten the golden rule first taught in juniors: always play to the whistle.

Queensland never troubled the scorer again from that point on.

Equally puzzling was Brad Thorn’s decision to replace Tate McDermott in the 60th minute, having only just put the Reds through the gain line with another trademark dart. The Reds trailed by only five at the time. And Jason Holland didn’t sit TJ Perenara down until the 67th minute and with the margin by then out to eight.

With James O’Connor out of action and certainly missed – as serviceable job as Lawson Creighton did in the No. 10 – the Reds needed their best players on the field and firing until the game was definitely gone. Kalani Thomas is going to be a good scrumhalf in time and maybe even a matchwinner, but that time is not yet.

McReight is reaching new levels with his game in 2022, that is for sure.

He took some time to adjust to Angus Gardner’s breakdown rulings, but I actually like that he was so willing and so keen to keep going back to the well. A good on-ball No. 7 is forever pushing the envelope, and McReight absolutely pushed it. Fourteen tackles, three turnovers won and just under nine metres per carry is a good return too, but he’s always been strong in these areas. Where he’s really lifted this season is his linking and passing game. His support play is certainly better too.

I don’t know what sort of adjustments Dave Rennie would have to make to his Wallabies game plan to fit McReight in and bring him off the bench to finish games alongside Michael Hooper, but we’ve surely reached the point where the conversation needs to be had. And it’s not even a matter of whether he’s surpassed Hooper or not; he’s surely now just playing too well to leave out.

With O’Connor gone, McReight could well be the determining factor in how deep Queensland go this season now.

On the event itself to finish with, everything I saw from afar over the weekend told me the Super Round is a concept well worth continuing with and exactly the sort of carnival-type atmosphere that works really well as an annual event.

The colour in the crowd, the noise and the atmosphere from the stadium emanating through the broadcast – despite the modest crowd size – all made my disappointment at not being able to make the trip to Melbourne cut only deeper.

And yes, there are plenty of things that can and would need to be improved about the way the whole event was run and especially the way it was promoted. Everything Geoff Parkes outlined yesterday was bang on the mark.

But everything about what we saw was great. And there would be plenty of venues on either side of the Tasman more than willing to put up their hands to host future incarnations and wanting to see the same broader economic benefits as travel confidence grows. Even if not Melbourne again, there would be no shortage of options.

Just in social media discussions over the weekend I saw places like Townsville and the Gold Coast and Newcastle mentioned. Places like Dunedin and even Napier or Albany. It’s not too big a stretch to assume Auckland and Wellington would be interested, and you can be assured Sydney would be too, with a brand-new stadium set to open later this year.

Governments and regional councils want the visitors and their spending money, and venues want the content. All would be willing to stump up funding for it, just as the Victorian government did.

It is a good concept and it was a great weekend of rugby. And it’s definitely worth doing again.