Paul Suttor
Expert
2nd May, 2022
0
Join the conversation
Advertisement
Write for The Roar

Brian Goorjian gave what amounted to a potential retirement speech after the Illawarra Hawks were bundled out of the NBL semi-finals by the Kings in Sydney on Sunday with the 68-year-old saying he would take a deep breath before deciding whether he had the energy to continue his glittering coaching career.

Goorjian is contracted to the Hawks for next season and after taking the Boomers to the historic first men’s basketball medal when they earned bronze at the 2021 Tokyo Olympics, he was expected to be at the helm for the 2024 campaign in Paris.

The six-time NBL championship-winning coach returned to the league after a decade-long stint in China to reinvigorate the Hawks, guiding them to the finals in back-to-back seasons.

They finished second but were bounced out of the playoffs by the Kings inside two games with Sydney to face the winner of Melbourne’s series with Tasmania JackJumpers, which will be decided on Monday night at John Cain Arena.

“You’re at an age now where I don’t want to stand on anybody’s toes. I think I’ve been the right person to this point and I have tremendous staff under me, tremendous people around me.

“I love the Gong. Whichever way it goes, whether I’m coaching or on the side, I’m going to be around there a lot. It’s an unbelievable place.”

It’s not like Goorjian has lost any of his trademark fire.

After a sluggish start on Sunday at Qudos Bank Arena, he inspired his Hawks with an expletive-laden burst during a time-out, calling out his players.

“You’re doing a terrible job now on the drop and protecting the f—ing rim. Do your job … More, f—ing more … Be a motherf—er,” he raged as his face went redder than than the Hawks’ team colours.

His assistant, Jacob Jackomas, is an NBL coach in waiting after serving a lengthy apprenticeship at Sydney and Illawarra – he stepped in to lead the team to an impressive win over United in Melbourne last month when the head coach was in COVID-19 isolation.

Goorjian has been part of the fabric of Australian basketball since the early 1980s, firstly as a player with the Melbourne Tigers before taking South-East Melbourne Magic to two titles in the 1990s, the Sydney Kings to a hat-trick from 2003-05 and the South Dragons to their improbable triumph in 2008-09.

All good things must come to an end but if Goorjian hangs up the clipboard, it will leave an almighty chasm for the NBL in terms of experience, expertise and publicity – nobody can sell the sport better.

Commentators like Homicide Williams and Boomers legends Andrew Gaze and Shane Heal put in the hard yards from the commentary box to hype up hoops Down Under but Goorjian’s gravitas from a coaching perspective gives the NBL an untold amount of box office appeal.

Like Gregg Popovich in the NBA with the San Antonio Spurs, you have the feeling that these coaches will never quit because it’s not in their nature.

If he does take a step back from the demands of coaching in the NBL, hopefully the allure of a silver or gold medal at the Paris Olympics will keep Goorjian at the Boomers’ helm.

The crop of bronzed Aussies led by Patty Mills, Joe Ingles and Matthew Dellavedova is fading away but the next generation has the potential to be a golden one. 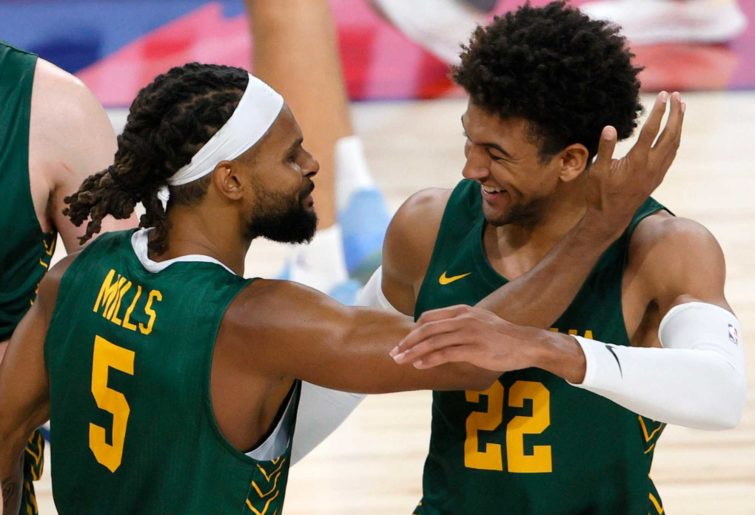 Patty Mills and Matisse Thybulle at the 2021 Olympics. (Photo by Ethan Miller/Getty Images)

Of course, a lot would have to go their way to knock off the United States for Olympic gold but it’s no longer an impossibility.

The main wild card for Australia’s chances is Ben Simmons and whether the former No.1 draft pick rebuilds his career and even wants to become part of the Boomers culture again.

But with the likes of OKC point guard Josh Giddey, San Antonio centre Jock Landale, Dallas young gun Josh Green, Philadelphia defensive specialist Matisse Thybulle and projected 2022 first-round draft pick Dyson Daniels, there is more than enough talent around for the Boomers to be on the podium again.

Goorjian’s decision will have massive ramifications – he says his final verdict will be what’s best for the teams, not himself. He’s always been about the team over the individual, it’s the hallmark of his success and if he doesn’t coach again, it will be part of a legacy that will leave an indelible mark on the Australian sporting landscape.

Of course it is we, the basketball fans, who are the selfish ones in wanting Goorjian to stay around. Most people who are 68 are tired of work, whatever pursuit they’ve chosen.