Sharks halfback Nicho Hynes is getting widespread positive feedback after posting on social media that all 16 NRL teams should wear special jerseys for Magic Round along the lines of the Nines outfits from recent years.

Hynes put out on Twitter that he’d “had a thought that I need eveyone’s opinion” with the idea being to raise money for charities by autographing and auctioning off the unique game-worn jerseys.

“Each club has to have a sick designed jersey to wear in the game. A bit like how clubs design cool jerseys for the 9s but go all out. Since it’s such a good spectacle imagine sick jerseys to go with,” he wrote.

“Then the players sign the jersey they wore and clubs auction them off to fans and raise some money for different charities… Thoughts?”

More than 1200 fans have liked the post on Twitter and it’s sparked more than a hundred comments with fans dusting off pictures of long-forgotten club jerseys which they think should get another airing.

Hynes has been moved to fullback for Sunday’s Magic Round clash with Canberra at Suncorp Stadium in a backline reshuffle after Will Kennedy and centre Jesse Ramien were suspended for high shots in Cronulla’s epic victory over the Warrriors at Shark Park last Sunday.

Melbourne’s Jahrome Hughes says he’s disappointed in himself for making derogatory comments about the blue-collar upbringing of some Penrith players, which they used as motivation for last year’s NRL preliminary final victory.

Social media footage from the Storm’s 2020 grand final celebrations after their six-point win over Penrith was shown to the Panthers players last year, with Hughes reportedly mocking their western Sydney roots, particularly the suburb of Mt Druitt where several team members grew up.

Ahead of their blockbuster Magic Round clash on Saturday night at Suncorp Stadium, the Melbourne halfback apologised for the comments.

He said he had been drinking for a few days after their grand final win and didn’t know he was being videoed.

“There was no disrespect to them or anyone out in their area,” Hughes said on Wednesday. 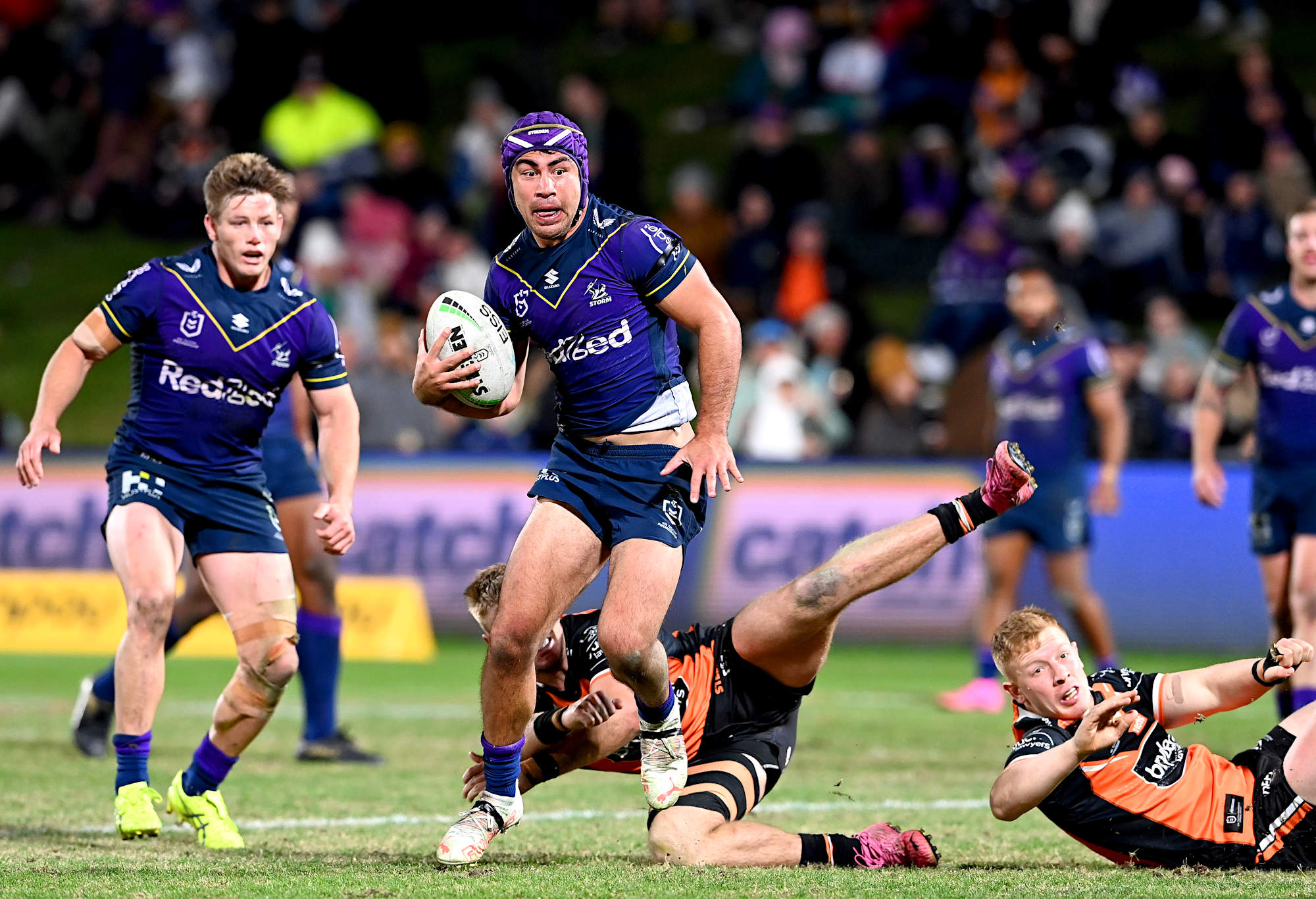 “I’m quite disappointed as I’m not that kind of guy and I don’t want to be looked at like that.”

Hughes said he initially wasn’t sure what the Penrith players were referring to when he was targeted during the 2021 preliminary final.

“They said a few things during the game to myself, but I didn’t really know the full extent, obviously I can’t really remember what happened.

“They made it pretty clear they were disappointed about it and so am I.

“Now I know what it is, I apologise – I didn’t mean any disrespect to them or their families or anything.”

He was also angry at himself for giving the Panthers additional motivation, which helped spur them to a 10-6 victory before they went on to claim the 2021 premiership.

“I’m obviously disappointed I gave them a bit of motivation because they ended up getting the chocolates,” the 27-year-old said.

Hughes said the rivalry between the two competition heavyweights stemmed from the recent success of both side rather than any class divide. 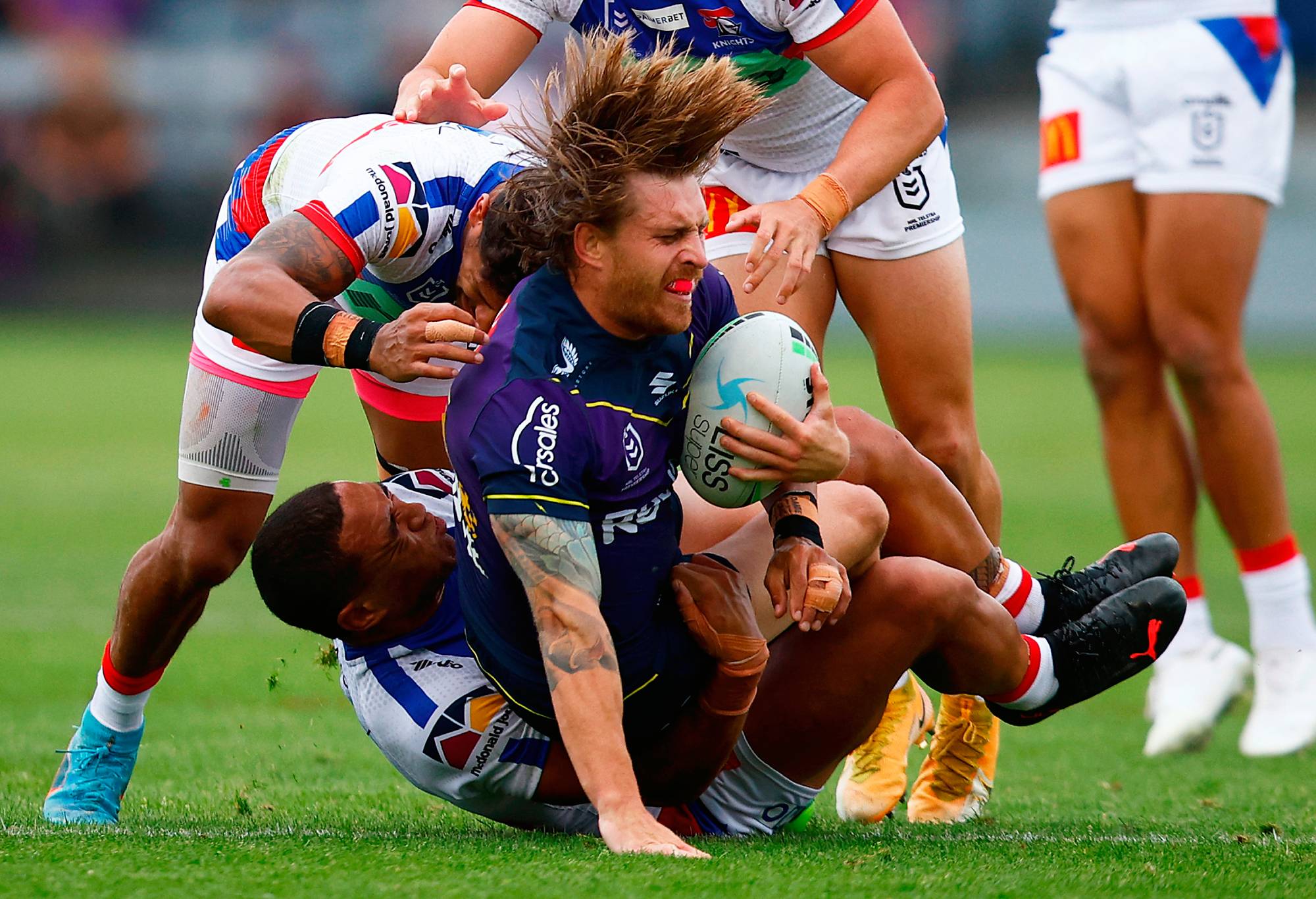 The Sydney Roosters are the latest club to be linked with a potential multimillion-dollar bid for the services of Storm star Cameron Munster but have denied they’re in the hunt.

Munster’s manager, Braith Anasta, said there had been no contact with the Roosters about a possible switch when his Storm deal runs out at the end of next year and coach Trent Robinson also said the innuendo was untrue.

According to a News Corp report, there is speculation in NRL circles that the Roosters could make a play for Munster after already signing his Melbourne teammate Brandon Smith for 2023.

“I’m taken aback by it too because we haven’t been contacted at all by anyone from the Roosters,” Anasta said on NRL 360.

“I’ve heard the rumours too. Obviously I’m Cameron Munster’s agent and it’s pure speculation. The noise is there but there is no substance to it.”

The Roosters have long been subjected to “salary sombrero” barbs over their seemingly endless ability to find money for high-priced recruits.

Their halves combination of Luke Keary and Sam Walker have struggled to hit their straps this year. Keary is under contract until the end of 2024 while Walker is a free agent at the same time as Munster.

Up-and-coming half Ronald Volkman was released by the Roosters earlier this week so he could join the Warriors immediately after he had already signed a deal with the Auckland franchise until the end of 2025.

Parramatta are looking to lock in one of the key members of their roster with second-rower Ryan Matterson’s management set to meet the club in the next fortnight to sort out a contract extension.

Matterson shapes as one of the last major pieces of retention for Parramatta, who have endured the most difficult six months of roster negotiations of any team.

The off-contract 27-year-old is so far yet to enter full negotiations, but is now finding his best football playing lock off the bench while back at full fitness.

Up to five other clubs have expressed interest, with Matterson looming as one of the few big-name back-rowers left on the market.

One of those clubs would likely be the Dolphins, who have signed Felise Kaufusi and Kenny Bromwich as second-rowers but still lack a genuine No.13.

Hooker Reed Mahoney is also bound for Canterbury, while Clint Gutherson and Junior Paulo are among those to have re-signed.

Parramatta opted against pursuing Jack Bird as a back-rower before he re-signed with St George Illawarra this week, keeping faith in the club’s rising young forward stocks.

But the back-row market is also slimming for the Dolphins and other rivals, with Angus Crichton, Adam Elliott, Wade Graham, Briton Nikora and Matterson the last remaining big names.