With the departure of the South Africans from Super Rugby, the Brumbies were always going to provide the top New Zealand sides with games of the highest intensity outside the local derbies.

So we eagerly awaited the matches between Australia’s best side and the Kiwis’ one and two, not only for results, but to see how the New Zealand coaches would approach it.

And they really could not be further apart.

I don’t think it’s unfair to say that you know exactly what the Brumbies will bring: huge heart and defensive effort, flooding of breakdowns, kicking to contests and picking off mauls for tries.

And before that offends too many home supporters’ sensibilities, a quick flick through of the team attacking stats for the year confirms the narrowness of their threat, as good as it is.

The Blues took a very direct, heads-on approach to this game.

With Joe Schmidt in the crew, there is a new steel about this Blues team, a doggedness in defence and a physicality that had been missing for some time. 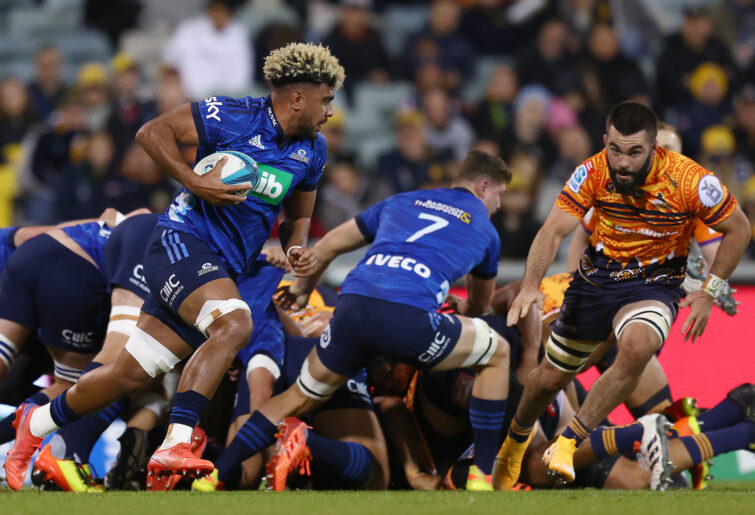 The Blues’ game plan went directly to these strengths: keep the ball, wave after wave of big runners (the starting pack carried the ball 70 times during this game, while Roger Tuivasa-Sheck carried 13 times for a single pass) and wait for the opposition to break, or offend.

And while the Brumbies were happy to concede penalties at will, I suggest they probably surprised the Blues with both the energy of their defence and for the length of time they were able to keep this up.

This is where the lack of an alternate battle plan very nearly came back to bite them. They invited the Brumbies into a street fight, and they got one, which very nearly cost them the game.

When the starting halfback passes the ball the ball over 100 times in a match and has 70 per cent territory, then I am looking directly at the halfback and the five-eighth for either the invention or the tactical nous to squeeze the opposition until they break and it just didn’t happen.

Last week I praised Beauden Barrett for playing in the slot, getting multiple touches and generally marshalling his team around the park and I was looking forward to more of the same.

But we saw a return to staying out the back, and waiting for things to unfold before injecting himself.

The lack of length on his kicking game was as exposed as James O’Connor’s was for the Reds this week, but luckily, the Brumbies don’t have the cattle to really hurt you on the return.

At the 26-minute mark I had him down for six touches and you cannot direct a game playing like this.

While each of the Blues’ tight forwards should have been in the running for the man of the match, there were two things in the loose forwards/breakdown work that were disturbingly like watching the All Blacks last year.

Firstly, the Brumbies were able to slow down the Blues’ ruck ball all night by fair means or foul, as the Blues’ loosies were just not arriving quickly enough, together, to compete.

And secondly, when they did it was not with enough physical presence to clear them out of the way.

Let’s be honest, the refereeing of the breakdown was kind of non-existent, so it was a free for all, but that’s no excuse for missing out on the key aspects of the game.

Slow ball meant a tough night for Finlay Christie, who was hassled at the base all night.

It meant the Blues’ forwards were working far harder than they needed to go forward but it also meant they were easy to read as there were few options outside narrow runners other than Tuivasa-Sheck hitting it into contact repeatedly.

It’s a blunt tool the Blues are operating with this year but it’s a damn fine one as their record shows.

But they opened a door here for the Brumbies that should not have been there, and let’s remember, were behind with a minute to go. It was a game plan that could have been extremely costly.

Contrast this with the Crusaders’ game plan.

Let’s begin with the reported comments of Nic White to Crusaders halfback Bryn Hall after this match. In short, the Crusaders had done to the Brumbies exactly what they had intended the other way round.

It began with selection. The country’s top tackler Tom Christie was relegated to the bench and Pablo Matera, Ethan Blackadder and Cullen Grace went out in the six, seven and eight shirts and the results were conclusive.

The Brumbies’ runners were cut down at the gain line (40 tackles between them without a miss) and picked off, and their arrival with force and accuracy at offensive breakdown time ensured quick ball and plenty of time for those out the back to make key decisions. 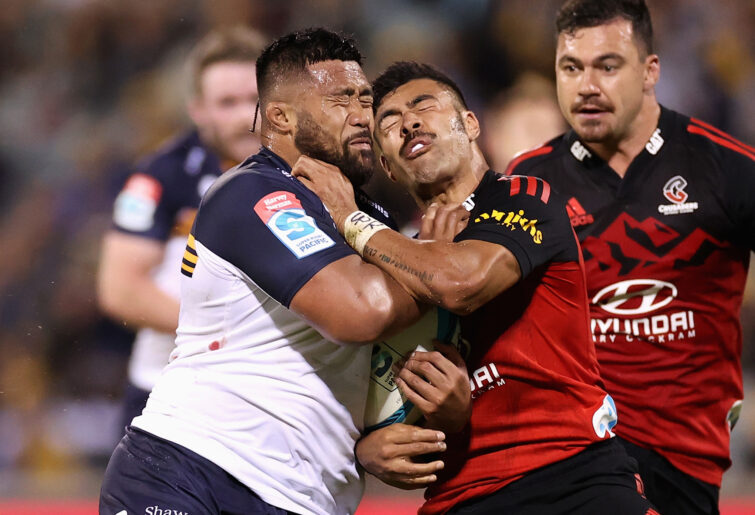 While Rob Valetini was a notable absence for the Brumbies, they still send out a big trio, but could not get a foot in the door.

Richie Mo’unga, as he has for all games this year, sat in the slot, took control of this one early and produced a kicking game that pinned the Brumbies back over and over again.

But this was not simply the Mo’unga show. By constantly sitting in that ten channel, the Brumbies had to hold defenders on him. His run numbers are astonishing this year, but that’s for another day.

That allowed the Crusaders to bring in both David Havili and Will Jordan either side of the ruck, to both run and kick without pressure as the Brumbies simply could not figure out where the next attack would be coming from.

It was well orchestrated and cleanly executed, and simply did not allow the Brumbies into the game.

The Brumbies again fought strongly to the end, but this game was over long before the final whistle, and was won as much at the planning table as it was on the grass.

Scott Robertson hasn’t aways got it right this year. Juggling all those All Blacks rest minutes would be something some would call a luxury. We from south of the Waitaki certainly think so.

But he nailed this one, outthought his opposite, varied his tactics throughout the 80 minutes to remain a moving target when they had the ball and put up a wall when they didn’t.

But most importantly, he developed a plan to comprehensively win the key match areas where coach Ian Foster’s All Blacks fell down time and time again last year.

Food for thought, I reckon.