Ah yes, wise words, and from one of the wisest professional sportspeople the world has ever known – the unrivalled, and the great, Ricky Bobby!

Indeed, “if you ain’t first, you’re last” played out this week, with Harry finding himself in a real Schrödinger’s Cat situation. Trailing Geoff and Digger by a point, clear of me by a point, and with the unique tip of Moana Pasifika going into Tuesday night’s game against the Western Force, Harry was both equal first and equal last.

“Isn’t The Crowd coming first?” I can hear whiny, pedantic voices asking, to which my answer is simply, “pfft.”

Of course, by the time you’re all reading this, Harry is no longer both first and last. But it was fun to know he got around in a confused state for a few days.

Last weekend was much steadier on the results front, with lots of fives and sixes recorded by Sunday night, as opposed to the fours and threes of recent weeks. By fulltime on Tuesday, we had our first perfect seven-game card achieved for the season, with Geoff well and truly hoisting the wet sail for the end-of-season run.

And interestingly, as much as Beauden Barrett’s 81st minute drop-goal secured top spot for everyone’s favourite team, it simultaneously cancelled out what would have been a three-way tie at the top between Geoff, Digger, and I (and what would have been a four-way tie if Moana Pasifika got up for Harry). It would have capped off a funny old turnaround from the previous week.

What the tightness of the panel this season tells me is that this season has been incredibly closely fought by both tippers on the panel and the tippees on the field. Which only further underlines Ricky Bobby’s mantra for life.

With the final eight all but set, this could have been the week for sneaky upsets. But the gap between the top teams and bottom teams feels too large for that to happen, and so this week will deliver another ‘white bread/missionary position’ regular set of tips.

That statement comes with the rider that, at the time of writing, we don’t know who the Blues will be bringing to Sydney. What we do know is that the Tahs will be putting their strongest available side on the park, and while that should be enough to fill the hill again at Leichhardt Oval, won’t be enough to get them the chocolates. 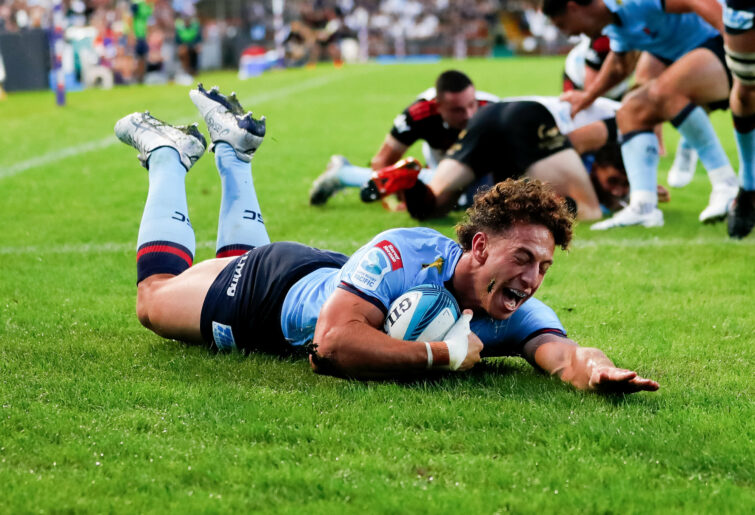 The only other match that genuinely looks as if it’s up for dispute is the Sunday afternoon game in Melbourne between the Highlanders – now sans Sam Gilbert – and the Rebels. How can we line these sides up?

The Highlanders are genuinely New Zealand’s fifth-best team, the runt of the litter. The Rebels, on a good day, are Australia’s fourth-best team, albeit that the Force, according to those in the know, remain on the cusp of greatness.

What I’m trying to say is that there isn’t much in it. Because you don’t win these tipping comps without being at least a wee bit bold, and because they’re actually going ok and have settled things down a bit with respect to injuries, I’m going for the Rebels.

Sure thing: we won’t see a worse take this week, or even this season, than the one from the clown who insisted that Sam Gilbert was due mitigation for his tip tackle, because Michael Hooper contributed to himself being dropped on his head.

So, Sam Gilbert, will forever be the name synonymous with destroying my third perfect week in a row. Sure, some may say there is more to it than that but it’s just easier to blame Sam.

This round does seem straight forward but there are a few games which make me a tad apprehensive. Not seeing teams causes me plenty of unease as well.

There is nothing to suggest the Reds will extend their winning run to two in Christchurch in the lonely fixture on Friday.

I will need to get in plenty of supplies for Saturday. I don’t think Lautoka will be a cakewalk but the Chiefs should scrape this out, while the Brumbies should record a rare win but not really a win in New Zealand.

On face value you would back the Blues after this season’s results, but will they front with their best? Don’t know, but still have to back the table topping team while the Force at home, with a sniff of a finals chance is likely to be a tough proposition. The ‘Canes should have enough points in them to get it done, while my gut feeling is the Highlanders will be very keen to wipe away last week’s disappointing effort and dispatch the Rebels.

Sure thing: with Sam out for five weeks now I feel confident of returning to a perfect week of tipping.

This is another one of those weeks that looks worryingly straightforward, which after three weeks producing perfect rounds, I can’t help but feel we’re all in a bit of trouble this week.

Straight up, the Crusaders, Chiefs and Brumbies will all win pretty well, I think. I mean, it’d be fantastic to see the Reds doing the Brumbies a massive favour by beating the Crusaders, but who’s really trusting a bunch of Queenslanders that much? Exactly, me neither.

I’ll actively cheering for the Force and Rebels to get up, and if both do it would mean the former sneak into eighth spot. And such is my commitment to the course, I’m prepared to put my patented kiss of death on both their opposition. You’re welcome, Force fans.

And to finish, I don’t know, I just think the Waratahs get up.

Even with the NZ teams working to a different team announcement schedule to the Australian sides – and here’s a novel idea for 2023: co-ordinated, competition wide team announcements! – the worst kept and widest circulating rumour in rugby this week is the Blues sending the second-stringers to Sydney this weekend.

And I like that the Tahs think they can beat anyone, anywhere at the moment, and confidence and momentum are powerful things, but I just don’t think NSW will miss the chance to take another major scalp before the finals.

May the hill be filled, and the Blues’ unbeaten run halted.

Sure thing: I will remember the Champions Cup Final is on early Sunday morning Australian time sometime mid-afternoon Sunday.

The final countdown! Who would have thought the little Waratahs would have only one fewer win than the mighty Brumbies going into the last round when this began?

The Reds are a decent team, but not ready to win in Christchurch against a Crusader mob who are getting ready for the business end of this long and winding season. Crusaders.

Similarly, the Chiefs will prepare for a stern examination in the playoffs by surviving a historic visit to Lautoka, and gravel a win.

Moana Pasifika have had no luck this season in their schedule. They will face a furious and grumpy Brumby team fuelled by righteous (but wrong-headed) outrage at a ref. Brumbies by 20 points and ten penalties.

The Waratahs will give the Blues a good go, especially with the visitors probably resting key stars, but the top team has enough (and has learned to win ugly).

The Hurricanes will blow the Force away. The Rebels will suffer the Highlanders’ wrath.

Sure thing: with post-season fixtures being decided now, the South African gambit into the URC can be better evaluated. Three Saffa sides in the URC playoffs and also qualified for next year’s top European club competition.

The Stormers won the SA plate and the chance to host playoffs until the final (if seedings hold, vs Leinster). Perhaps everyone is better off?