It’s incredible how quickly a team can go from looking utterly unbeatable to exceptionally ordinary.

This time last month, there was legitimate reason to think Melbourne could go through a whole season undefeated: now, they’ve lost three games in a row, the latest a thrilling loss to an inspired Collingwood on Queen’s Birthday, and with the last Magpies goal dropped below Brisbane into second on the ladder.

The Dees face the Lions in a fortnight’s time knowing that a fourth will probably see them drop to third. No team in the competition has more badly needed their week off this year.

It’s easy to point to the absence of Steven May again as the major factor; but his greatest impact against the Pies might have been psychological. The Dees’ defence held up relatively well, especially considering Harrison Petty spent time off the field after a head knock; but opposition teams no longer look up in fear at the hulking figure patrolling the backline.

At the same time, the Demons have looked far more nervous with ball in hand without their safety net in May behind them, and there’s far more urgency and panic in their ball movement at times when their backs are against the wall. Throw in other factors, like the still-subdued Christian Petracca and an obviously banged-up Max Gawn, whose heroics against Sydney were a long way off his efforts against the Magpies, and empires have crumbled on less.

Look how the Magpies entered attacking 50, compared to other teams in the first 10 weeks. They strolled in, handballing through the zone, bursting through the pressure, and finding targets running back towards goal – Brody Mihocek and Jamie Elliott each kicked one from the goalsquare in the last term.

Even big Mason Cox had the time, the space and the composure to kick a goal on the run during the Pies’ surge.

No longer are teams playing into the Dees’ hands with high, hacked balls primed for intercepting or neutralising. And the reigning premiers haven’t coped.

But while the Dees are vulnerable, it still takes plenty to beat them. And Collingwood, following on from the superb performances of Fremantle and Sydney, were worthy conquerors. They came with a plan, executed it wonderfully, and the scoreboard only really reflected their dominance by the end – 26 points the final margin.

As it was against the Dockers, and at stages against the Swans, it all began unravelling in the midfield. The Pies grew stronger and more confident the longer the day went on at the colface; leading contested possessions 77-73 at half time, it grew to 144-132 by the final siren, while stoppage clearances outside the guts were a lopsided 27-14 in their favour.

Jordan De Goey will have better days on the stats sheet, but his bullocking work in tight was apparent all day, winning six clearances. Jack Crisp does plenty of the tough stuff, but makes his bacon with his raking runs out of stoppages and deadly left foot, such has the goal to officially put the ice on the Magpies’ best win under Craig McRae (and their best home-and-away win since the early stages of 2019, in my book).

Really, it was Clayton Oliver versus the world in there: Petracca had his moments, winning seven clearances, but his brilliant, game-breaking explosions from the contest have been noticeably absent for weeks now. With 27 disposals at the half, 12 of them contested, Oliver seemed capable of winning it for the Demons on his own.

Which made these comments from David King on Fox Footy all the more baffling: at quarter time, with Oliver having already amassed 16 touches, he backed in the Magpies to continue to not clamp down.

“16 disposals to Clayton Oliver, but only the two score involvements. Does he need a tag or not? I don’t think so at this stage,” King said.

The issue? The Dees had only scored four times – not to mention the times when Oliver had opened up the field with a penetrating pass, only to have a teammate forget Jeremy Howe hasn’t played for them in half a decade and kick it down his throat.

By half time, those stats had grown to 27 touches, with four of them score involements, plus a goal of his own. All at 81 per cent disposal efficiency, mind you.

“I guess the argument is, the midfield of Collingwood is on top at the moment, it really is,” King then remarked at half time.

That was true enough – but when the Pies did put more attention into Oliver after half time, especially post-stoppage – Taylor Adams in particular paid him very close attention – it was remarkably how quickly the Demons’ ball movement fell apart.

The redhead would still finish with 42 possessions, but his influence on the game quickly dried up – he’d have only three contested possessions for the rest of the match. Probably a good thing Craig McRae, and not King, was at the helm. 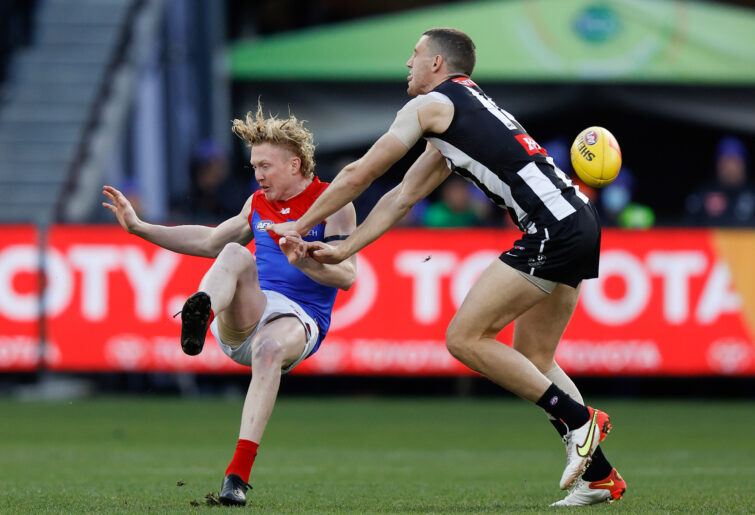 Clayton Oliver of the Demons and Darcy Cameron of the Magpies in action. (Photo by Michael Willson/AFL Photos via Getty Images)

Replacing Oliver as best afield was, of course, Cox – though Oliver would claim the official medal in a losing side.

From almost the moment he began one of football’s most remarkable journeys, Cox’s flaws have been derided: but his best, as Richmond famously found out in THAT preliminary final, remains remarkable.

There was a five-minute period in the third quarter when Cox became Carey: stationing himself behind the ball as the Demons attacked, he plucked contested mark after contested mark, those Inspector Gadget arms rising above the contest time and again, as he does from time to time.

His work at ground level followed suit – I doubt there’s a bigger confidence player in the game. That’s why when he goes big, he goes LARGE. Always has.

It sounds harsh, but I feel like Cox’s footy intelligence is one of the lowest going around – perfectly understandable given his background and that he didn’t grow up playing the game.

He’s never going to be able to do what he did today on a consistent basis – really, two of these games in a month (he was also great against Carlton) is about as much as you can expect. And when he’s struggling, even getting near the ball is a challenge.

But on his day, when the planets align, his timing is right and his hands sticky, he’s as unstoppable as any player in the game. 21 touches, eight marks, a goal and 407 metres gained made him the biggest reason on the ground for the Pies’ victory.

The Pies ruled the skies all day, in fact: 18 contested marks to 7, with Cox and Brody Mihocek – whose four goals and gargantuan final term made the most of the May-sized holed in the Dees’ defence – taking the lion’s share of those.

Noticeable in comparison was the lack of influence of Luke Jackson in response; a young man with the world at his feet, he was soundly beaten by the Cox-Darcy Cameron ruck combination both around the ground and at ruck contests, with Gawn clearly hampered by a series of knocks and almost unsighted after half time.

Jackson’s impact in the ruck was a huge reason behind the Dees’ 2021 grand final comeback, but it might be time for Simon Goodwin to assess that that level of performance can’t be expected on a weekly basis from him just yet. Cameron was already taking it up to Gawn in the ruck – though big Max still produced the hitout of the year in the second term.

The Dees relied on Gawn plucking contested marks everywhere against the Swans; without them, they neither had any presence overhead, nor impact when the ball hit the ground. It led to repeat inside 50s for the Pies in the second half, and even the Melbourne defence with May there would have struggled to cope with that heat.

Ben Brown’s form slump continued despite two goals – he was all but unsighted apart from those, with one a gift from Isaac Quaynor – and no Tom McDonald further exposed the Dees’ aerial problems in attacking 50. You’re going to find it tough to win many matches with only six marks inside 50 – the Pies had 12 – and if Bayley Fritsch is shut down at the moment, the Dees can’t really score.

Jackson looked decent up forward, taking a strong mark near goal in the second term and threading through a beautiful set shot in the last. It’s probably worth consideration to have him play as a key forward with stints in the ruck moving forward, like the majority of one-ruck sides do, and let Gawn, provided he’s refreshed after the bye, be used to maximum effect (pardon the pun) as the number one man rather than sharing the role.

May’s absence, too, told more and more the longer the game went – especially once the Dees gave up the goose and slowed to a crawl in the final moments.

Mihocek bagging four goals would have been far more difficult with May around – Jake Lever looks a shadow of the player he was in 2021, and Mitch Brown was a stop-gap at best in the second half when Petty needed replacing.

But from the nine-minute mark of the third quarter, when the Pies found themselves 20 points down – incidentally, it’s the third week in a row the Dees have been in front by 20-plus points and been overrun – Collingwood kicked a goal from 31 per cent of their inside 50s – nine from 29, to be exact. Once they started kicking straight – not least because they began to take marks in the goalsquare rather than snapping under pressure from general play – the Dees just had no answer.

A quick word, too, on Nick Daicos: I’ve felt all year there are a few major names ahead of him in what’s looming as a very open Rising Star field, but I’m fast changing my mind.

I’ve never seen a 19-year old look safer with the ball in hand, or seem to have more time. It’s very Scott Pendlebury circa around 2008, and he set the Magpies up beautifully all day from half-back, while winning three stoppage clearances to hint at his future in the midfield.

Melbourne don’t need to panic just yet – really, if there’s anything we’ve learned, it’s that you should make sure your most important players don’t need club-imposed suspensions. You’ll see critics of the Dees’ culture this year, forgetting that Richmond went through something similar and barely missed a beat in 2020 on their way to a flag – mostly because neither Callum Coleman-Jones nor Sydney Stack were best 22 players, let alone the most crucial piece in the puzzle like May is.

But the story is Collingwood. The race for the eight is ridiculously tight – the Pies, despite wins over the Dees and Dockers, could easily fall back to ninth if Richmond knock over Carlton next week. But make it or not, there’s so much to like for a side that went through seismic change both on and off-field last year. And if they do get there, there is no side also on the run for finals that they will fear.

This isn’t a side slowly building for five years’ time, or three, or even one. The Magpies’ time is now.