Bartlett has also accused unnamed parties of subjecting himself and his partner to threats and a public campaign to discredit them since March last year.

The bombshell development is the first time in months that Bartlett has commented publicly about matters at Melbourne.

Stories have emerged since earlier this year about off-field problems at the Demons during the 2020-21 summer, when coach Simon Goodwin was under growing pressure.

Bartlett resigned suddenly as president in April last year after serving in the role since 2014, with Kate Roffey taking over.

He said at the time he was “totally cooked” and Bartlett then resigned from the Melbourne board in November last year.

In the statement, released on Thursday, Bartlett says: “The decision to step down when I did was mine.

“I did so to ensure minimal distraction, after a very promising and indeed historic start to the season.

“As president, a workplace/OHS lawyer, and a parent, I was not willing to compromise on fundamental values, the law and expected standards of behaviour.

“Since March 2021, we (he and his partner) have been subjected to threats, deceitful conduct, and a public campaign to discredit us professionally and personally.”

Bartlett added that during his time as president, he “was doing everything possible to have a club free of workplace bullying; gambling; harassment and illegal drugs.”

When Bartlett resigned from the presidency, the Demons had made a 4-0 start to last season and they would go on to win the premiership, breaking a 57-year drought.

But after starting their flag defence with a 10-game winning streak, Melbourne have lost their last three matches.

Apart from the ongoing media stories about Melbourne’s off-field past, fullback Stephen May was suspended for a game last week after a fight at a local restaurant with teammate Jake Melksham.

Captain Max Gawn is also out for several weeks with an ankle injury.

The Magpies coach hopes more players have the courage to show a bit of personality with the media in future. 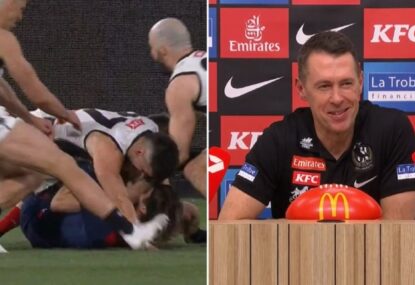 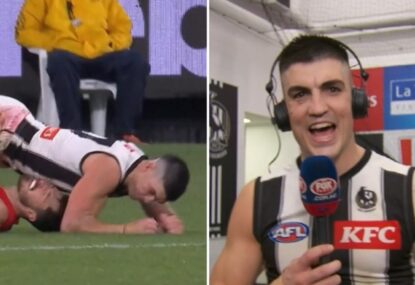 10/10 comeback from the Magpies star! 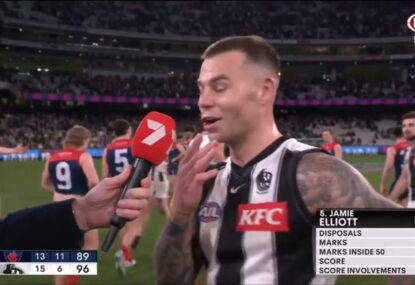 Collingwood, eh? Of all the Pies' now 11 consecutive wins, including the Queen's Birthday triumph over Melbourne that really got everyone talking about them,… 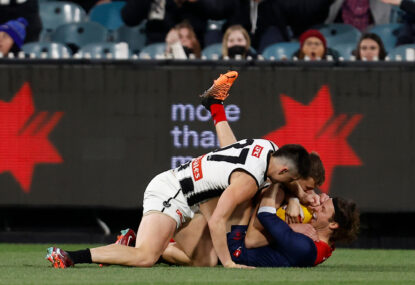 The Pies goalsneak- and the fans- absolutely loved this! 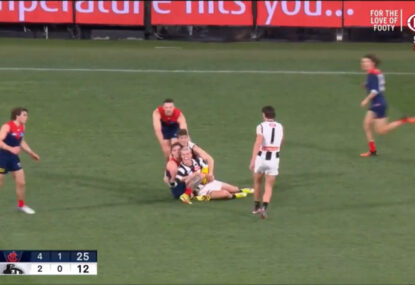 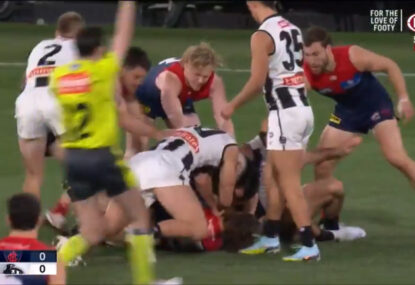