In a draft packed with multi-dimensional prospects, there hides a 19-year-old jewel who carries versatility on both ends of the floor like a badge of honour.

Young, athletic, and impactful from anywhere on the court, Dyson Daniels offers two-way virtuosity that NBA teams must be salivating on for the coming 2022 NBA Draft.

“I’m a stubborn defender,” Daniels said of his game for NBA.com. “(I) create offence out of my defence.”

With what he has shown in the developmental league, his claims were as true as they could get. In 29 games with the G-League Ignite, he normed 11.6 points, 6.6 rebounds, 4.8 assists, 2 steals, and 0.8 blocks against some borderline NBA competition.

Daniels’ motor has been his bread and butter, locking up opposing players from positions one all the way to four through sheer lateral movements and upper-body strength uncharacteristic to a six-foot-seven teenage prospect.

Obvious of his two-steal per game output, his defensive awareness and quick hands were some of the most active in the G-League, only allowing 0.64 points per one-on-one possession (72nd percentile), according to NBA.com.

His tenacious on-ball and off-ball resistance, amplified by his six-foot-10 wingspan, puts him as one of the top defensive prospects in the class. Daniels’ tendencies and knacks suggest a very game defender, who can subdue opponents through verticality and lateral speed.

In an era where defensive versatility across positions has been a commodity, the Aussie’s guarding game carries value on any team assembling a championship-level crew.

Daniels anticipates opposing plays effectively, fights off screens decently, and his physicality has made offensive players think twice at the point of attack. His quickness to recover from separations has been admirable too, oftentimes pushing opponents to take tougher angles even when they’ve beaten him in the first step.

In the combine, these defensive tools were on full display, posting a 10.8 lane agility time on par with reigning Rookie of the Year Scottie Barnes, who, just like Daniels, was known for his defensive motor and terrific two-way gifts.

But unlike Barnes, who stands just the same as the Australian but weighs 225 pounds with a 7-2 wingspan, Daniels’ physique remains a work-in-progress as his current near 200-lb frame may not cut it against much sturdy offensive specimens in the next level. Filling out such a promising frame must be one of the teenager’s priorities.

Yet, his upsides overshadow his physical drawbacks.

Considering his age, Daniels’ potential is worth cashing in on.

Daniels’ feel for the game was proven to be above average for his age. What he can offer offensively has been predicated on timely cuts, playmaking, and general awareness. At this end of the court, however, some crucial facets are still left to be desired.

Daniels’ inability to create for himself has been apparent from numerous stretches. His burst of speed may have been sufficient, but the details that follow his drives prevent him from slithering through defensive cracks and finding openings in the rim.

While his tightness off the bounce sometimes manifests deficiencies but often flaunts decency, his off-the-dribble production is a glaring problem, especially if he is aiming for a lead guard role in the NBA. 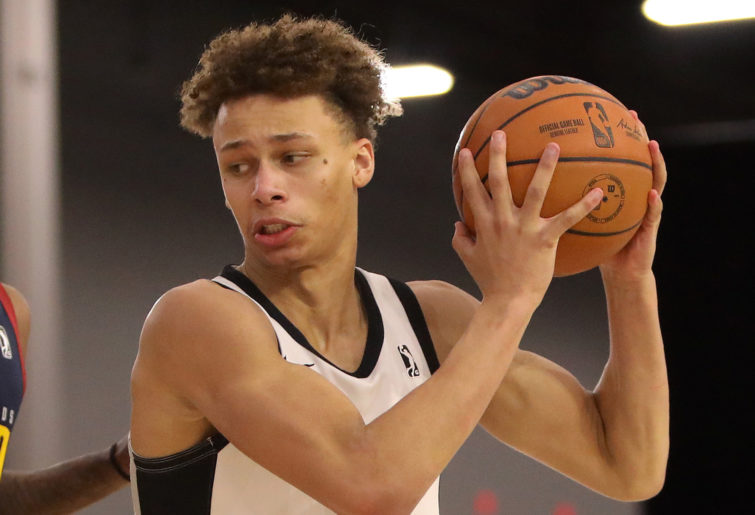 He shot 5-of-14 (36 per cent) in isolations, according to Synergy Sports, and 5-of-20 (25 per cent) on shots off-the-dribble in the 25 games they tracked Daniels. These were far from elite, but his down-the-hill drives show his willingness to embrace contact around the rim and underscore his upper body vigour.

Paired with a tall body frame, Daniels leaps off opposing defence with his wide repertoire of wrong-foot finishes at the rack, allowing him to make 40 of his 70 attacks at the basket (57 per cent) — mostly courtesy of his ambidextrous touch in the rim.

Daniels has also been mildly efficient with his floaters, clipping in about 38 per cent (13-of-34). The efficiency may not be eye-popping but the film shows silky touch about eight-to-10 feet around the basket and his relative ease while doing so may become indicative of how good he will be against tougher, more athletic talents in the NBA.

These self-manufacturing struggles were offset though by his playmaking and natural facilitating feel. In the eye test, running an offense is innate for the Aussie.

Daniels has been impressive in turning gaps into slight openings for his teammates. His patience also signalled a somewhat veteran-like generalship on half-court sets. His heads-up mentality has been a catalyst for easy transition opportunities, from which his teammates — some explosive enough to deliver some rim rattlers — have benefitted the most.

Be that as it may, Daniels has one monkey wrench that hurts his stock — an unreliable jump shot.

Shooting has been his game’s weakest point.

Daniels had shot 30 per cent on near three attempts per game from the three-point line in his lone Ignite season — a near decent percentage for an international player adjusting to the NBA rainbow line. But this comes in a caveat. He only made 28.6 per cent (16/56) of his catch-and-shoot threes, in which he only nailed about 22 per cent (5/23) of guarded looks and 33 per cent (11/33) of unguarded ones.

His questionable shot-making, doubled down by his in-the-work self-creating game, raises concerns about Daniels’ ability to deliver — consistently and efficiently — on the offensive end.

Even so, his final nine games showed an impressive uptick, draining 45.1 per cent on 31 three-point attempts. Nine games may have been too small to project his future touch, but it promises a developing jumper from a prospect whose youthful tenor gauges a future worth anticipating.

Daniels’ floor is not as high as other prospects in this draft but his ceiling puts him above most in his class. The Aussie exerts influence in the game in a variety of ways, and his effectiveness may only come down to what system he falls onto or what role he plays.

His early returns may be far from perfect, but Dyson Daniels sure looks promising. Seeing how he fare against the world’s best of the best is just a matter of time.