David Mead, in his final game for Papua New Guinea, has scored an emotional winning try to give the Kumuls a 24-14 upset win over Fiji in the final Pacific Test at Campbelltown.

Mead announced his retirement from international footy this week, was given a fairytale ending to an illustrious career that began at the 2008 World Cup.

It could not have been more fitting, and the sight of the Kumuls stalwart clutching the badge as the PNG fans celebrated on the hill will live long in the memory.

“It’s been a special week, coach Stan (Tepend) and all the players have made is special for me and the family,” said the captain in the post-match press conference.

Mead rightly will take the plaudits but this was an excellent team performance, built on excellent line speed and goal-line defence, even more impressive given the lack of training time that the Kumuls have enjoyed.

This was a game won in the forwards by a team that lost the battle of possession and territory but repeatedly turned Fiji away.

When PNG got the ball, Justin Olam, their undisputed star turn, was outstanding with ball in hand and Lachlan Lam, the Roosters halfback, was both provider and finisher of several moves.

The attitude to show up in defence and then play with adventure in attack was what won the day in the end: they completed north of 90% but still made five line breaks to the Fijians’ two.

Fiji could call upon far more familiar names, but lacked crucially in the halves and consistently failed to make the most of their field position and last tackle options.

Their lack of a recognised halfback was glaring, with Kevin Naiqama, usually a winger, and Taane Milne, usually a centre, shunted into playmaking positions.

“There was a lack of patience as soon as we got close to the try line, trying to score every set,” said vice-captain Tui Kamikamica.

“But in saying that, it was a pretty physical game and PNG really deserved to win.

“The hunger is there but it’s only one week and three or four days of training. We’ve got some good depth so it’s a good stepping stone leading into the World Cup at the end of the year.”

Their star was Suniva Turuva, the Panthers NSW Cup fullback who stole the show above better-known colleagues.

His stats told one story – and at 229m and five tackle breaks, it was a good one – but it was also the elusiveness, toughness and bravery of his carries that shone through. His two tries were no less than he deserved, and the second – scored after the bell with the game gone – exemplified his effort levels.

Fiji will come better come the World Cup – they missed Api Koroisau at hooker in particular – and will benefit from more time together to build combinations. PNG, who are in a group with the Cook Islands, Wales and Tonga, will harbour series designs on the latter stages.

The first game of the day, between Samoa and Cook Islands, had been all about attack, but it was clear early on that this would be a more physical, combative contest. 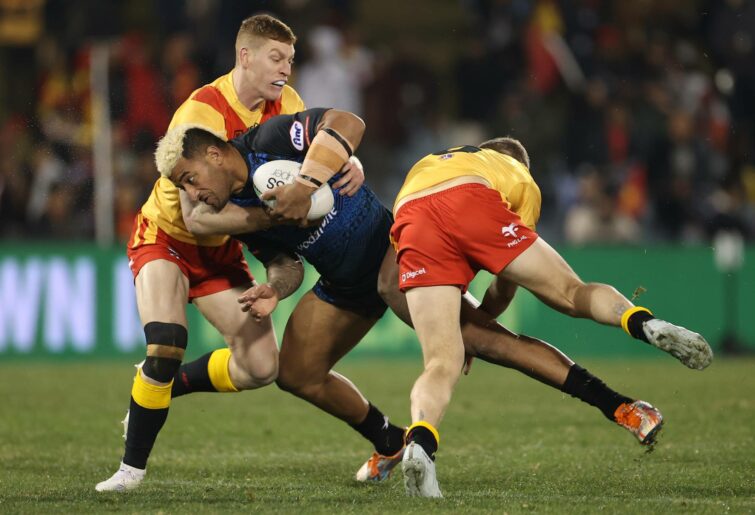 Fiji forward Lamar Liolevave learned that in just the third minute with a bad head knock that ended his night early. Shots were flying in from both sides and, gradually, it was the Fijians who inched forward.

Taane Milne, in the unfamiliar role of lock, came closest early on but was adjudged to have knocked on in his attempt to ground the ball.

Kevin Naiqama, also playing out of position in the six jumper, did his best impression of a regular five-eighth to open the scoring. On the last play in good ball, he kicked for himself and, via a mistake from Kumuls forward Daniel Russell, was presented with a simple chance to score.

The Bati were making serious inroads. They dominated the ball and territory, but couldn’t score. Maika Sivo made a break through Kyle Laybutt, who lost his footing at the worst moment, but the PNG defence scrambled superbly to force an error.

PNG had enjoyed no field position, but they didn’t need it. From deep in their own half, Lachlam Lam shifted to Olam, who skinned Mikaele Rawalawa and dumped back inside for a excellent Kumuls try.

The grind returned, with Viliame Kikau and David Mead trading massive shots, before another Kumuls masterpiece blew the game open. This one owed more to sheer will and power than to dexterity, but it was no less impressive.

Nixon Putt sent Tui Kamikamica flying with a fend to break down the left, before McKenzie Yei picked up a pass that was going nowhere and bolted low to the ground through several tacklers to smash the ball into the turf. It was a remarkable carry to top off a first half of remarkable carries and tackling.

The Kumuls had enjoyed less than a set’s worth of tackles in the Fijian 20, but someone led 12-6 at the break.

PNG had all the momentum, even after the resumption. They won a penalty in kickable range and should have took the two, but gambled and nearly came up trumps.

Laybutt slipped under Kikau and struggled his way to the line, but was called back for a double movement.

Having spurned the chance to move the deficit beyond a converted try, Fiji made them pay.

Their red zone attack had been substandard, but Taane Milne took it upon himself to create something, sliding a kick between the legs of Lam for Turuva to add a much deserved try. Nautu’a Masima missed the kick to ensure PNG kept the lead.

They would not need it: their fairytale was yet to come, with Lam breaking the line and David Mead backing up to score under the posts in his final game.

Lam would get the final say, too. Olam was the star again, kicking with his left for his halfback to charge onto the ball and seal the deal for the Kumuls. Turuva grabbed one back after the siren, but it was too late.