There are a couple of moments that will stay with me long after I forget that the New South Wales Blues beat the Queensland Maroons 20 points to 14 in the 2022 Women’s State of Origin.

The sound of hundreds of boys and girls after the game screaming names like ‘Jess’, ‘Corban’, ‘Ali’ and ‘Millie’, desperate to get a photo or autograph from their favourite women’s players.

Or the vision of Ali Brigginshaw and Chelsea Lenarduzzi, still on the field 40 minutes after Queensland lost, still signing autographs and taking photos graciously, giving away their boots and their scrunchies and socks, walking barefoot on the cold grass of GIO Stadium in Canberra.

Emma Tonegato being in the moment and talking like she was in it too, in her half-time interview with Emma Lawrence from Channel Nine.

The moment of redemption for Kirra Dibb, a woman who has been excluded from representative teams for close to two years.

But after being signed by the Newcastle Knights at the last minute for the 2021 NRLW season and having a stellar season with the North Sydney Bears in the Harvey Norman Women’s Premiership, she fought her way back, bursting through the line on Friday night with a fierce left-foot step to score a try under the posts.

Over the next few days, I’ll continue to bask in these little moments and reflect on just how far the women’s game has come and how much there is to look forward to. 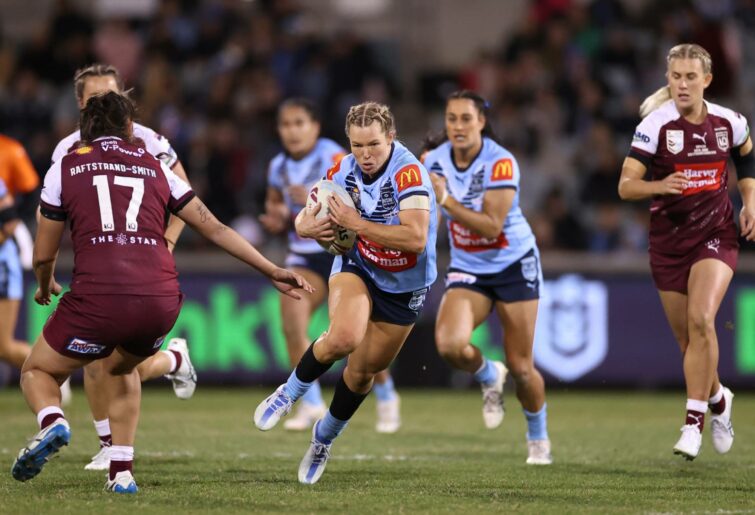 But after such an incredible fixture, I can’t help but ask why the decision has been made by the Australian Rugby League Commission to make the women’s State of Origin a two-game series next year.

Growth for the women’s game is important and I absolutely want that growth to occur.

But in a shift to a two-game series, there is a very real risk that NSW win one game and Queensland win the other. In that situation, my understanding is that the reigning winner is awarded the series.

So as it stands, NSW only need to win one of the two games next year to be crowned champions again. It seems nonsensical.

In my view, it either stays as one game or we move to a three-game series. There should be no difference between the men’s State of Origin and the women’s.

But there is a difference. And that comes down to money.

The ARLC may have made this decision to grow the women’s game slowly. There is merit in that.

Until the women competing are appropriately compensated for their time, it’s simply not fair to keep asking them to get time off not just to play, but also to participate in camp.

The alternative is continuing to juggle work with elite sport and our athletes constantly feeling under pressure. This is not an appropriate alternative.

But this is the situation that exists now with pay disparity existing between NSW and Queensland and some women struggling financially just to participate in camp.

Maroons squad members are being paid $9000 with those that took the field receiving a $6000 match fee.

For the women in this squad, this has taken a load from their shoulders. It means they no longer have to worry about the juggle while in camp and can focus on what they are there to do: play footy.

This is not the case for the Blues squad members, who will be paid $2800 and those that took the field receive a $6000 match fee. 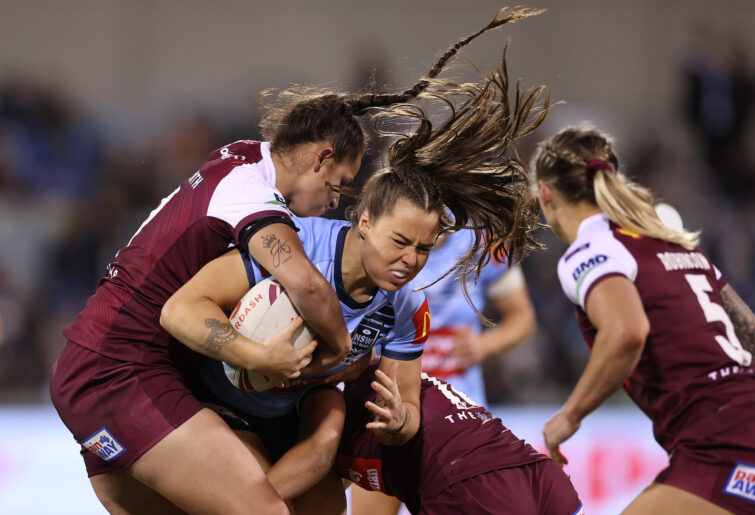 The gap in pay is also reflective of the Queensland players being contracted for a longer period of the year and attending more training sessions in the lead-up to State of Origin camp.

Due to time off work, some of the Blues squad members have taken a financial hit, with it being reported that those earning the match payments are trying to support those that have not.

With a two-game series, that hit becomes even greater and women will likely need more time off if they are to compete at an elite level.

This is compounded by the expansion of the NRLW next year, which will mean players are contracted for almost six months of the year. This is almost double the current state of play.

Growth is great. But it must come with appropriate financial compensation and medical support and the right facilities so that these women can compete an elite level.

Otherwise we are growing unsustainably.

Negotiation of the next collective bargaining agreement will commence in the next couple of months and it will include a historic CBA for the women’s game. This is important because at the moment there isn’t a CBA, which sets out minimum conditions for our female athletes.

Given the recent announcement by the AFL and AFLPA of a new CBA for the AFLW, which will see average salaries increase by 94 per cent across the board, there is precedent.

There is an opportunity here for the NRL and the RLPA to do the same and match the growth in the number of games with a growth in punnet.

It’s time for the women’s State of Origin to move to a three-game series. But let’s make sure we are paying our athletes appropriately for the exceptional display of footy that they treat us to.