Geelong will be without star defender Tom Stewart for their next four AFL games after failing in their bid to reduce his rough conduct suspension.

As expected, the Cats’ reigning best and fairest winner pleaded guilty on Tuesday night after he was referred directly to the tribunal for the ugly bump that concussed Richmond onballer Dion Prestia.

Geelong are second after beating the Tigers, with Stewart knocking out Prestia late in the first quarter on Saturday night at the MCG.

Prestia was forced out of the game and the ugly incident reignited debate of whether a sin bin or send-off rule is needed in the AFL.

The Cats did not contest that the charge was careless conduct, severe impact and high contact.

They argued Stewart had .39 of a second before he took out Prestia and pointed to his spotless playing record, as well as his genuine remorse.

“He ran past the ball and made a conscious, albeit split-second, decision to bump player Prestia at speed. The degree of carelessness was high, he breached his duty of care by a significant margin,” Gleeson said in the tribunal verdict.

“While he did not intend to commit a reportable offence, he was careless as to whether he did so.”

Gleeson added the bump was late and happened well after Prestia would have expected contact.

“He was wide open, exposed and vulnerable,” Gleeson said.

“Player Stewart had sufficient time to see that player Prestia had not taken possession and was no longer actively involved in the contest.”

But those incidents did not sway the tribunal.

“Neither example is sufficiently comparable to provide close and clear guidance,” Gleeson said.

AFL advocate Nicholas Pane said the bump was delivered at speed and Prestia was vulnerable when Stewart made impact, adding the concussion was “a serious injury in itself.”

Stewart will serve the first suspension of his AFL career and had conceded before the hearing he was “at the mercy of the tribunal” and indicated he would accept his punishment.

Richmond’s medical report on Prestia, which was tabled in the tribunal hearing, said a CT scan had cleared Prestia of any facial fractures from the bump.

But he will miss a game at least because of his concussion.

De Goey back at Pies

Jordan De Goey has ended his personal leave from Collingwood and could play in the Magpies’ round-16 AFL clash with Gold Coast.

The controversy-plagued star returned to the club’s AIA Cente headquarters on Tuesday, setting him up to potentially be included in the Magpies’ squad to face the Suns at Metricon Stadium on Saturday night.

De Goey was granted personal leave from the club last Wednesday, after the Magpies confirmed they had pulled a lucrative four-year deal off the table for the 26-year-old free agent.

It came as De Goey dealt with the fallout from his ill-fated trip to Bali.

De Goey apologised for his “disrespectful” conduct during the Magpies’ bye round after vision was posted to social media last week.

He also revealed he had been diagnosed with ADHD and vowed to make changes to ensure he stays out of trouble.

The dynamic forward-midfielder missed Sunday’s win against GWS that lifted Collingwood back into the top eight.

Magpies coach Craig McRae last week said he was unsure exactly why De Goey was away from the club and had reached out to him a day before his pre-game press conference but did not receive a response. 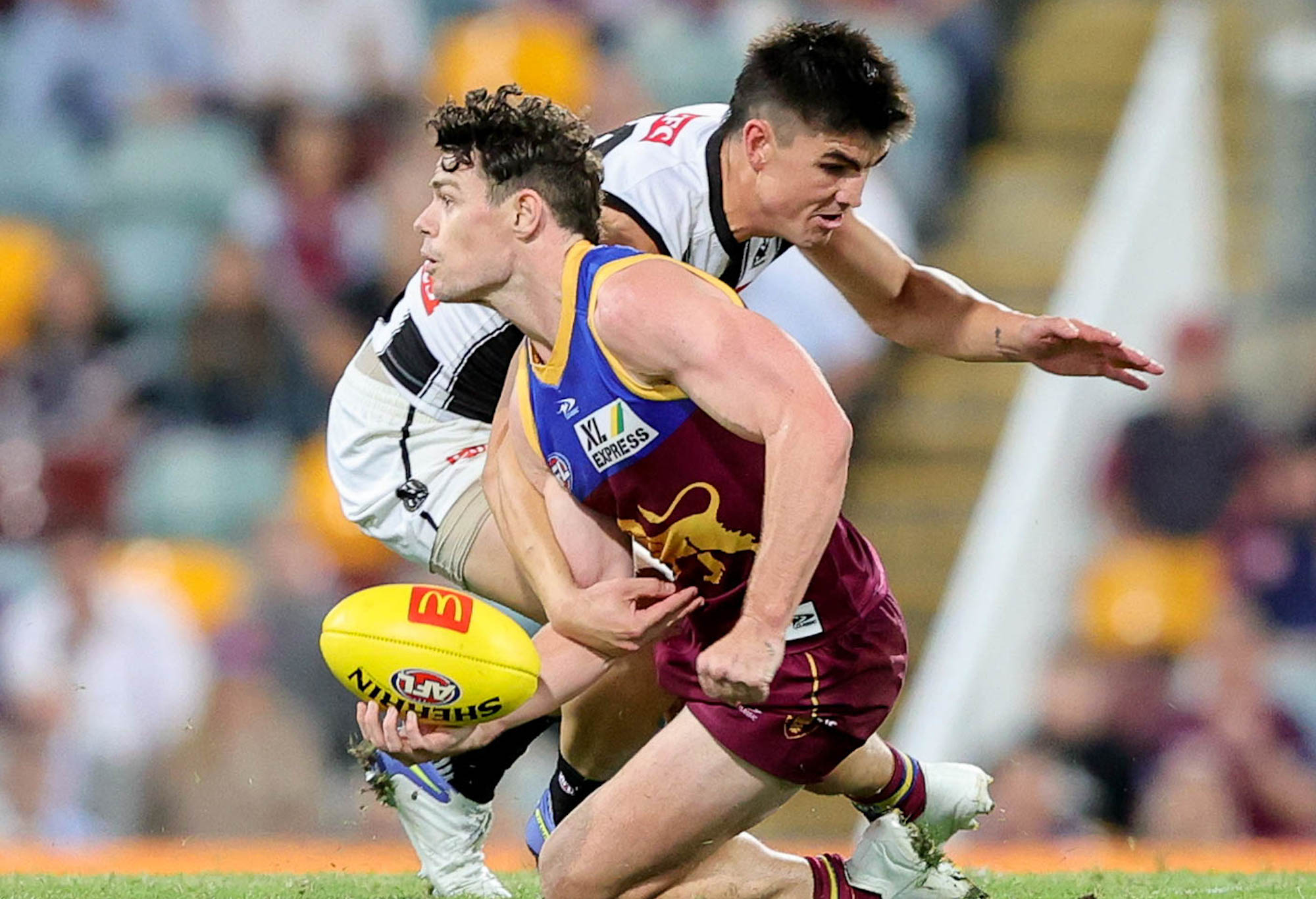 Star AFL midfielder Lachie Neale has recommitted to the Brisbane Lions until the end of 2026, putting to rest any speculation he could return to Fremantle.

Despite being contracted until the end of the 2023 season, the Lions have confirmed Neale has signed a new three-year deal

Neale considered a shock move back to the Dockers last off-season for family reasons when Western Australia’s border was closed because of COVID-19 issues.

The 29-year-old was forced to speak publicly after an intense few days of speculation once a report was floated about his future in September last year.

Neale in March revealed he had “some minor discussions” with wife Jules, who is originally from Perth, about seeking a trade back to Fremantle.

But with travel around Australia back to normal, Neale and his young family are far more settled in the Queensland capital as the third-placed Lions seek to win their first premiership since 2003.

“The goal is definitely to hold up a cup in a Lions guernsey,” Neale said.

“The boys are really hard-working people who are trying to make themselves better and we’ve struck a really nice balance.

“The team’s will to improve and will to get better is first class and I feel like we’re set for a really sustained successful period.

“I’d love to hold up more than one (cup) but I’d happily take one.

“We’ve come a long way and we have a group that’s ready to go and we’ve had some experience in finals now.”

Neale is right in contention to add a second Brownlow Medal to the one he claimed in 2020.

Lions football boss Danny Daly was thrilled Neale would be staying for at least another four seasons.

“Players like Lachie Neale don’t come around every day, so for him to put pen to paper is a huge moment for the Brisbane Lions and at a very exciting time for us,” Daly said.

“Since the day Lachie arrived at the club, he has been a fantastic player on the field, capped off with a Brownlow Medal, but he has also been extremely valuable in what he brings to us off the field.”

Paddy Ryder lashed out at whoever claimed he was involved in a bar-room altercation with St Kilda teammate Bradley Hill to “show your face and name yourself”.

St Kilda have confirmed Ryder and Hill were involved in a verbal altercation but denied reports the star pair were left out of the AFL team last week for disciplinary reasons.

“I wasn’t involved in any altercation which has come through the media outlets tonight. Just want to make that clear. Anyone have anything different to say please come forward, show your face and name yourself. I’ll wait. Good night all,” Ryder posted on social media.

The Saints on Monday night said Ryder and Hill were part of a “verbal exchange and disagreement” with fellow patrons at a venue in Mordialloc. A third player was also present.

The incident happened on the Saturday following the Friday night defeat to Essendon in round 14. Ryder and Hill both played in that match but missed the round 15 clash with Sydney at the SCG last Saturday night.

Ryder was listed as “managed” and Hill was sidelined due to “personal reasons”. The Saints said reports the pair were left out for disciplinary reasons are “incorrect”.

“Following a verbal exchange and disagreement with fellow patrons, all three left the venue without a fight ensuing,” the club said in a statement.

“As previously communicated by the club, this incident had no impact on selection, with Ryder missing due to ongoing management and Hill for personal reasons which meant that he was unable to train on both Monday and Tuesday and not in a condition to take his place in the side against the Swans.”

The Saints (8-6) have slipped to 10th on the ladder following three straight losses.

Saturday’s 51-point loss was St Kilda’s worst of the season, with the heavy defeat putting the heat on coach Brett Ratten.

Ryder and Hill are two of St Kilda’s most important players, and it remains to be seen whether they will be slotted back into the side for Friday night’s crunch clash with Carlton at Marvel Stadium. 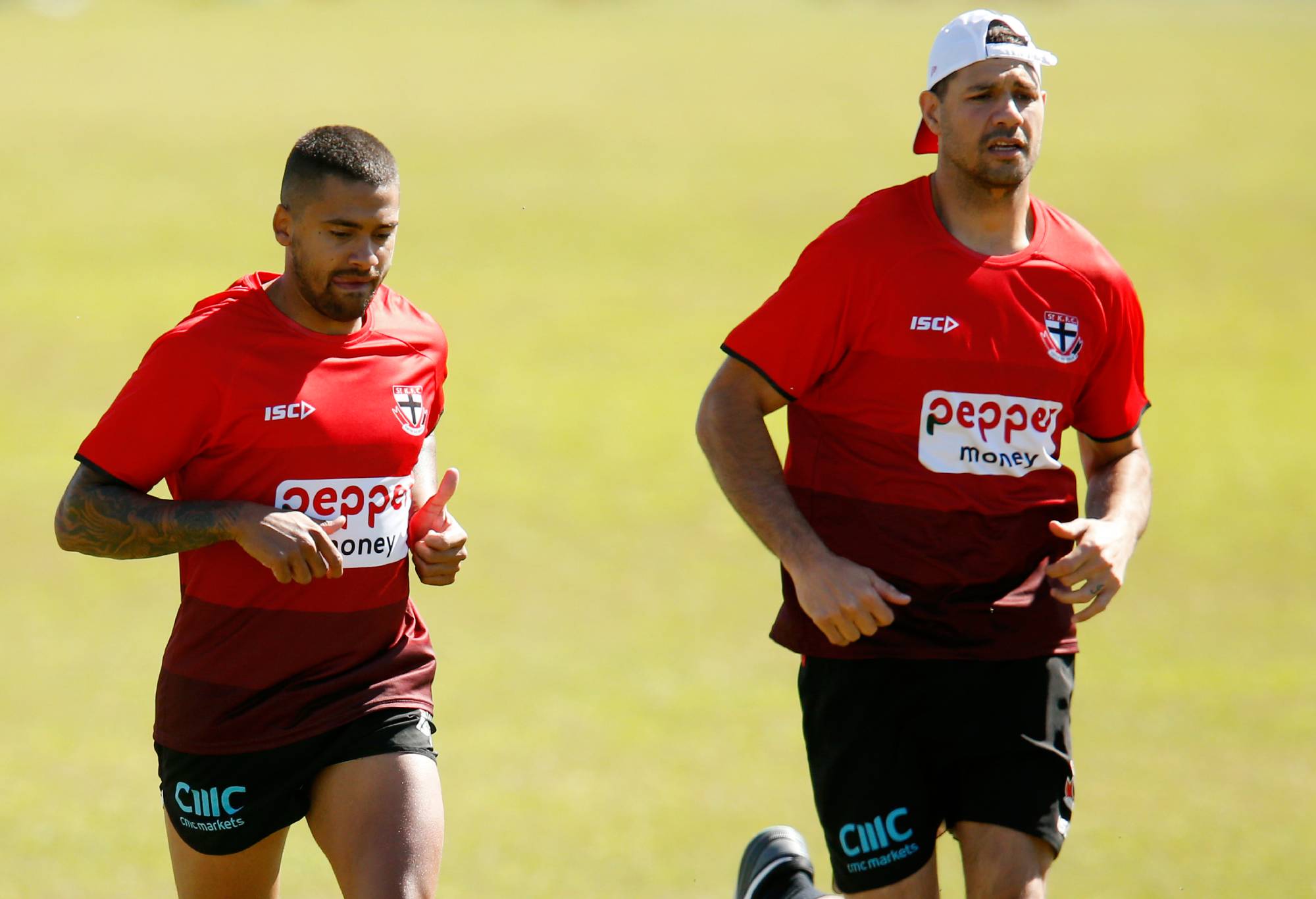 Hood pleaded for patience in a letter to Kangaroos members on Monday night as veteran administrator Geoff Walsh embarks on a review of the club’s football department.

It comes amid increasing pressure on coach David Noble and his support staff, as well as the playing group, following Sunday’s 57-point thrashing from Adelaide.

The result was the Kangaroos’ 12th consecutive defeat and left them anchored to the bottom of the ladder, one win and percentage adrift of West Coast.

North’s average losing margin during the active streak is 59 points and they have become the first team in AFL/VFL history to lose 10 consecutive games by 40 points or more.

“When I wrote to members after Round 8, I expressed frustration with our football performance to that point,” Hood wrote in Monday night’s letter, which was posted on the club’s website.

“That frustration, shared across our club, has grown as the season has progressed.

“By Round 15, with no discernible improvement, patience among our supporters and members is, understandably, wearing thin. 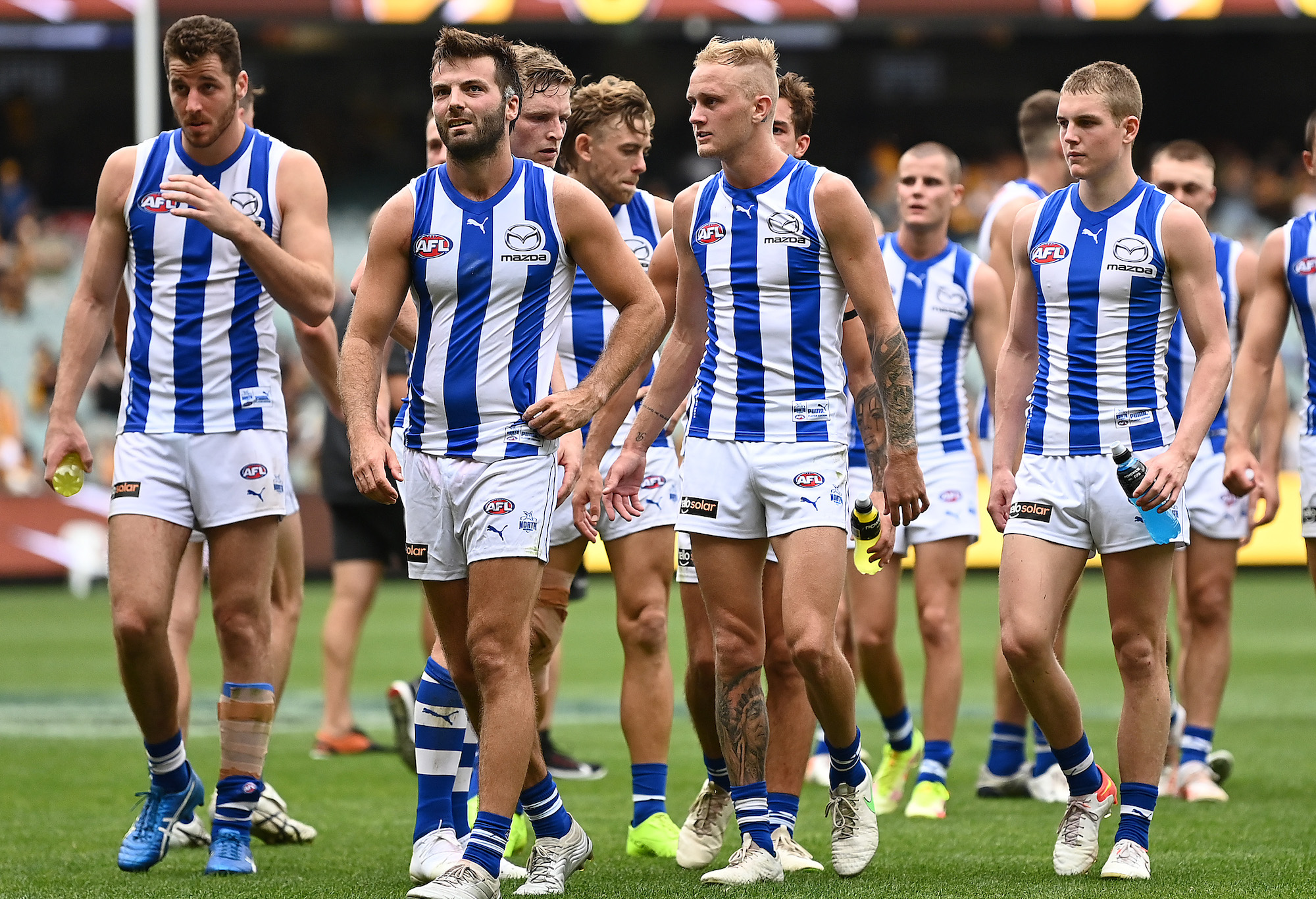 “We always knew this year would be hard, but the extent of our losses is deeply concerning.”

Hood on Monday met with Walsh, who has one month at North Melbourne to determine what is and is not working within the football department.

A summary of Walsh’s findings will be released to members.

“He’ll bring 30 years of industry experience and will provide objectivity and deeper analysis of our operations while those in the football department go about completing their day-to-day roles,” Hood wrote.

“In the meantime, we ask for your patience with the process, and support for our staff and players who are working as hard as they can to turn this around,” Hood wrote.

The Kangaroos face a tough ask to snap their losing streak when they take on second-placed Geelong at GMHBA Stadium on Saturday.