When Dan Butler and Hunter Clark clashed heads deep into the final term, with St Kilda just clinging to the lead against a surging Carlton, Saints fans would have been forgiven for thinking their club was cursed.

A similar dire run with injury had ruined their chances against Brisbane a month ago, and led to a run of three consecutive losses to see them tumble out of the eight. Having already lost key defender Dougal Howard to a knee injury midway through a sterling job on Harry McKay, and with Rowan Marshall’s return from his own head knock in doubt, running out of puff seemed a real possibility.

But after a week full of challenges, with everyone all the way up to Brett Ratten coming under fire for their insipid loss to Sydney, the Saints were all heart.

It wasn’t their best victory of the year – their comeback win over Geelong remains the clubhouse leader on that score – but in terms of their season, this 15-point triumph is surely the most important. No matter what may come in the next seven weeks.

The Blues have had a swathe of ups and the occasional down throughout this year of resurgence, but fell foul of one of footy’s traditions: beware the side coming off a shocker. Out to prove a point, this was a different, more ferocious Saints side than at any point for a month, and not even an in-form Blues could do much more than hang in there for most of the game.

The turnaround couldn’t all be pinned on the pair whose absence against the Swans caused such a stir during the week – Bradley Hill and Paddy Ryder – but for vastly different reasons, they were among the most crucial of Saints. So too was Jack Sinclair, given a new lease on life having been tagged to oblivion six days ago.

No one talks about the Saints midfield all that much, outside of talismanic captain Jack Steele, but it was at the coalface where this game was won. The injuries that have hit the Blues, particularly in defence, mean if you can match them at the source, you give yourself a chance. A powerful Fremantle side couldn’t do it a round ago; the Saints’ engine room most certainly good.

Part of that was Ryder’s influence – at 34, it is some testament that he remains quite comfortably the club’s most crucial player. Perhaps only Nic Naitanui can rival him as the greatest tap ruckman in the game, with a great many of his 31 hitouts – most notably a gorgeous one to the advantage of Jade Gresham in the third quarter, which went within centimetres of a goal – of the absolute highest quality.

It’s fascinating how much more threatening the Saints look with Ryder and Marshall both fit and firing. Minus Ryder last week, Marshall worked like a Trojan, but couldn’t be everywhere at once.

Ryder would regularly take the centre bounces, then charge forward, leaving sole Blues big man Tom De Koning with a choice: either follow the veteran deep and risk being outpointed, as he was for one of Ryder’s two first-quarter goals; or stay with Marshall as he roamed up the ground and risk being run ragged.

Marshall had 22 disposals, 12 marks – a number titanic contested grabs all across the ground – and aside from his brief period off in the final term, was the dominant player in the air all night. Ryder ruled the stoppages, but was just as vital up forward, regularly providing a presence and ensuring the Saints’ forward structure didn’t begin and end with Max King.

Speaking of King, it was his night where Ratten deserves the most credit, on what was a superb night at the helm from the out-of-contract coach. Frustrated to the point of self-destruction with the quality of ball use against the Swans, Ratten chose to make King the tallest decoy in world history.

Leading into the pockets and dragging Lewis Young away from dangerous space, the 50 opened up for leading targets, from the mid-sized Tim Membrey, stationed far closer to goal this week than last, to smalls Butler and Jack Higgins who relished the openness.

King had one kick for the first quarter, and was targeted just once from the Saints’ first 10 inside 50s. But his job wasn’t to hog the stats, it was to make life easier for his partners in crime. It was as selfless a term as you could wish for from your spearhead. 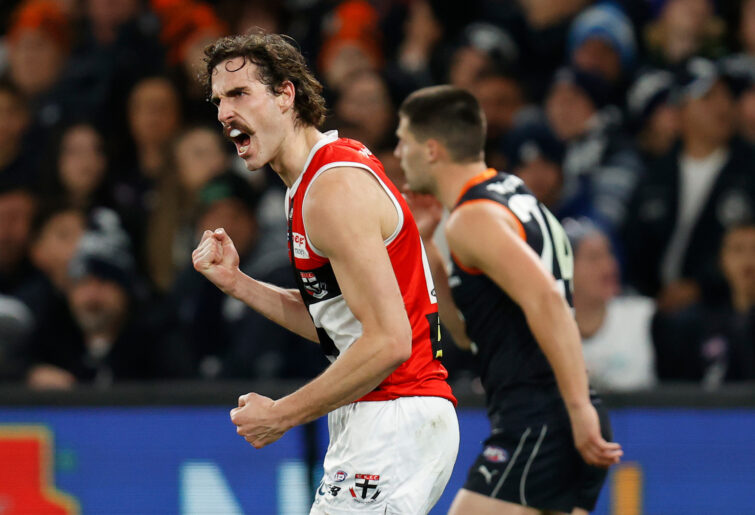 Max King of the Saints celebrates a goal. (Photo by Michael Willson/AFL Photos via Getty Images)

But it’s one thing to put all the pieces on the board – you’ve still got to trust your players to find targets. But it’s fortunate that Ratten has, in Hill and Jack Sinclair, two of the year’s finest kicks.

Both were given far too much space by the Blues, particularly early; it became apparent just how much of an impact Swan Ryan Clarke’s tag on the latter, and the absence of the former, had nullified the Saints’ ball movement last week.

Sinclair’s first half was among the year’s finest by any player: with 24 disposals at 88 per cent efficiency, 403 metres gained and four inside 50s, he already had best afield honours sewn up by the main break.

While he slowed from there, his calmness, elite kicking skills and underrated defensive skills – some of his work going back with the flight to spoil away from a charging McKay was incredible – make him an All Australian lock, and the clear most improved player of 2022.

Hill’s night was more complicated: the loose man in defence in the first term, with Sam Walsh starting alongside him before pushing up to become a spare man around the contest, the number 8 quickly proved why that move was fraught with risk.

Just as impressive as Sinclair to start, Hill had nine touches by quarter time, with 218 metres gained and three score involvements. Walsh could match the first stat, but was nowhere near on the others.

For much of the rest of the night, though, Voss sent Matt Cottrell to keep him company; and for a time in the second quarter, as the Blues surged with five straight goals, it was that move that looked like turning the game.

Instantly shutting down Hill’s run and carry – the Saint was twice caught holding the ball in that term alone – and proving dangerous the other way, Cottrell kicked the first goal of the quarter, and could have added another later on.

Hill would still have 27 disposals, and was smart when he needed it, though; you’d give the points to him in that contest all up. For all he has achieved this year, Voss seemed not to heed what the Swans had taught: the Saints love getting the ball in Hill and Sinclair’s hands more than Brian Taylor loves calling Jack Newnes ‘Noons’. They must be shut down at all costs.

If the Saints won it in close, the Blues lost it in front of goal: as off the boil as they were, and as superb as the Saints performed, this may well have ended differently had Carlton not lost the plot from the set shot.

Bad kicking is bad football, as the saying goes: Tom De Koning, George Hewett and especially Charlie Curnow sprayed simple shots everywhere but through the big sticks with the Blues otherwise doing as they pleased in the third term.

They dominated virtually every stat for the term, except the one that counted. They kicked 1.6; the Saints, despite one mark inside 50 for the second and third quarters combined, tallied 3.1. It was the difference between a sizeable lead and chasing the game at three-quarter time.

Still, when the Blues banged on two quick goals to start the final term, with McKay’s sizeable height and bulk advantage finally holding sway over the gallant Josh Battle, it seemed like their dominance would at last be reflected on the scoreboard.

But no. King, moving further up the ground than at any stage this year, began to clunk towering marks, one crucial grab at half-back getting the Saints out of a jam in defence. Up forward, contending with a mismatch against the Blues’ undersized backline, it was Membrey’s time to shine – a reversal of roles from last week that proved far more threatening.

With just one goal across the Saints’ three losses, it has been baffling to see a player with the forward craft of Membrey stationed so far up the ground for so much of their matches – with the team struggling for goals, to boot. It’s one thing to be a link player, but quite another to be spending the majority of your time 150 metres away from goal.

Not so tonight. Drawing a free kick and calmly slotting a goal to give the Saints some breathing space, his fourth for the night in the dying minutes – an overhead snap under pressure in the goalsquare worthy of a Rioli – put the icing on a famous Saints cake.

This is the Saints of earlier in the year – ferocious in close, tenacious defending, precise in rebounding and deadly near goal. Fittingly, King, arguably the most influential player on the ground despite what the stats say, finished the job in the final minutes.

Ratten’s smile said it all. It’s been a rough month for the Saints – but they are BACK.

The race for the eight just became a whole lot tighter.