Edrick Lee scored five, Jarrod Wallace was sent off and the “awful” Titans were embarrassed again as Newcastle ran out comfortable 38-12 winners at McDonald Jones Stadium.

The Gold Coast’s season went from bad to worse as the NRL’s bottom side served up as bad a performance as they have produced all year in a first half that saw them 22-0 down. They were lucky to get nil.

Wallace was sent off late for a spear tackle as Justin Holbrook’s men unravelled. If there weren’t serious questions about the suitability of the coach, there must be now.

Wallace will now face a long period on the sidelines, while David Klemmer will also be charged after he appeared to punch him in the melee that followed.

“It was awful,” Gold Coast coach Justin Holbrook said. “We didn’t know what we were doing out there,” he added in reference to their defence out wide which conceded eight tries to Newcastle’s wingers. “Getting a few wrong and it got worse, so we’ve got a lot to fix up, that’s for sure.”

Holbrook said the Wallace tackle was obviously dangerous but it “was one of those ones that got out of control” and there was no deliberate action behind it.

The Titans were horrific and Newcastle were able to ruthlessly exploit them. Only their lack of a goalkicker stopped this from being an even bigger thrashing.

“It was good to hear the team song,” Knights coach Adam O’Brien said after going winless for the past month. “I was really happy with our start, I thought we built the game nicely in the first half. I thought we applied some early pressure and got in the game cycle early.

“It’s good to see some stuff from training starting to transfer into games.”

The five tries for Lee will be the headline, but he was merely the beneficiary of the Knights’ improved ability to spot weaknesses in the defensive line and shift the ball rapidly. The wingers scored all eight tries, with Dom Young grabbing a hat trick on the other edge.

Granted, there are weaknesses everywhere in this Titans defence, and Anthony Milford and Adam Clune were able to find them. Bar a ten minute period to start the second half, the Gold Coast didn’t look interested.

They made 14 errors and were battered through the middle, losing the yardage count by 600m as Newcastle all too easily rolled down the field.

The first 10 minutes stood only as a testament to the truth that neither of these teams are very good at football. It was 12th place facing 16th place, and looked like it. Though the Knights ran out easy winners, they had their own moments of weakness too, albeit they were more readily able to correct their problems.

Newcastle had enjoyed the better of it, and eventually engineered some points via a kick from Clune that Brian Kelly fumbled and Young grasped.

On the first set after points, the Knights kicked dead, then from the seven tackle set, gave a penalty away and invited the Titans into their half for the first time.

Toby Sexton dropped the ball into Lee, but out of yardage, Lee dropped it straight back. No worries: Erin Clark threw a horrendous pass from dummy half and Paul Turner made the error. With 20 minutes gone, there had been six errors, five penalties and much frustration all round.

The Titans had looked horrendous in attack, but Newcastle were much more effective. They got into good ball thanks to yet another penalty and shifted left, with Milford producing a moment of quality to send Lee into a corner.

Kelly, already enduring a horror night, lost the ball in yardage and handed the ball over 20 from his own line. Newcastle went straight back to the well: this time, Clune was the provider for Lee with Jamayne Isaako lining up on the wrong man in defence.

Anything Kelly can do, Greg Marzhew can do too. He lost the footy in the same position for another easy good ball set and then allowed Dom Young to get around him for a spectacular try. It was a superb putdown from the Jamaican winger, but Marzhew exerted minimal pressure attempting to stop him.

With seconds to run in the first half, Tino Fa’asuamaleaui threw a totally needless interception to Enari Tuala, and while he was hunted down by Patrick Herbert, the line was shot.

Clune picked out Lee with a kick for his hat trick and a 22-0 lead. Only Tex Hoy’s horrendous goalkicking – 1/5 – made it even half-respectable.

Justin Holbrook went to his half time team half bewildered. His team had completed at 60%, made several of their worst errors in early yardage sets, conceded five tries and offered the square root of nothing going the other way. 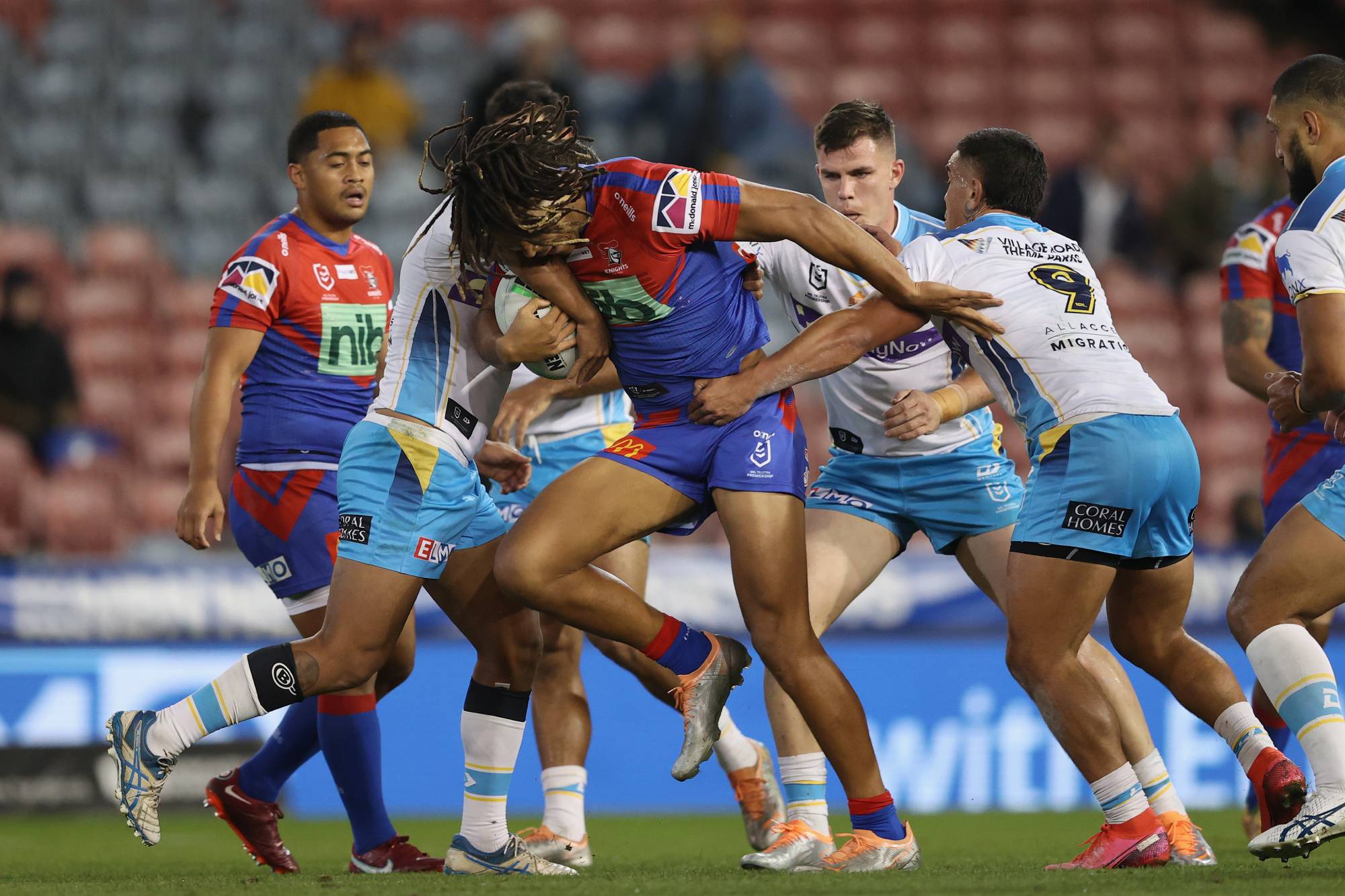 AJ Brimson, usually among the best for a poor Titans, sparked them early in the second half. He squirmed between Tyson Frizell and Mat Croker – both caught grabbing at arms – and got the Gold Coast on the board.

Fifita then decided to join the party, producing an excellent offload from which Tanah Boyd was able to fling the ball wide for Marzhew to get another.

The Titans will always shoot themselves in the foot, however. David Fifita was pinger for mouthing off to the referee, and from the penalty restart, the Knights spread to Lee again. He appeared to put a hand in touch as he slid for the line, but the bunker claimed it was in the air and the winger was awarded his fourth of the night.

Isaac Liu was the next to drop it from his own end. Simi Sasagi picked it up and was tipped well beyond horizontal in a tackle by Wallace. David Klemmer, for his part in attempting retribution, was binned for punching.

Lee had time to add another try, the most ever scored by a Knight in one game, with Young completing his own hat-trick late with an interception to put a final nail in the Titans’ coffin.

Holbrook must be hoping that it is not his last game in the job. He said they “were a million miles off” and added that personnel changes would be on the way for the last-placed team.