I’m watching a series on Stan right now called A Million Little Things and that was the power to the Wallabies’ astonishing win over England in Perth.

It wasn’t one play that ended the Eddie Jones’ hoodoo but a whole lot of little things when the Test could have gone pear-shaped many times.

When you watch a Test, you want to see an ensemble cast in gold all contributing at various moments and that’s pretty much what the Wallabies needed to win 30-28.

The Petaia try was a beauty but never forget it was ignited by Marika Koroibete leaping to grab the kick-off.

England led 14-9 at the hour mark at that point and the tourists could easily have surged to win by 15 rather than it emphatically being the other way around.

England won the physical battle early but the Wallabies roared back and weren’t going to be bullied. This is the character that fans want the Wallabies to stand for.

You could pick out a few different heroes. I’ll settle for Kellaway, Kerevi and Koroibete and Cadeyrn.

Andrew Kellaway thought Test footy had passed him by. He’s been a revelation. 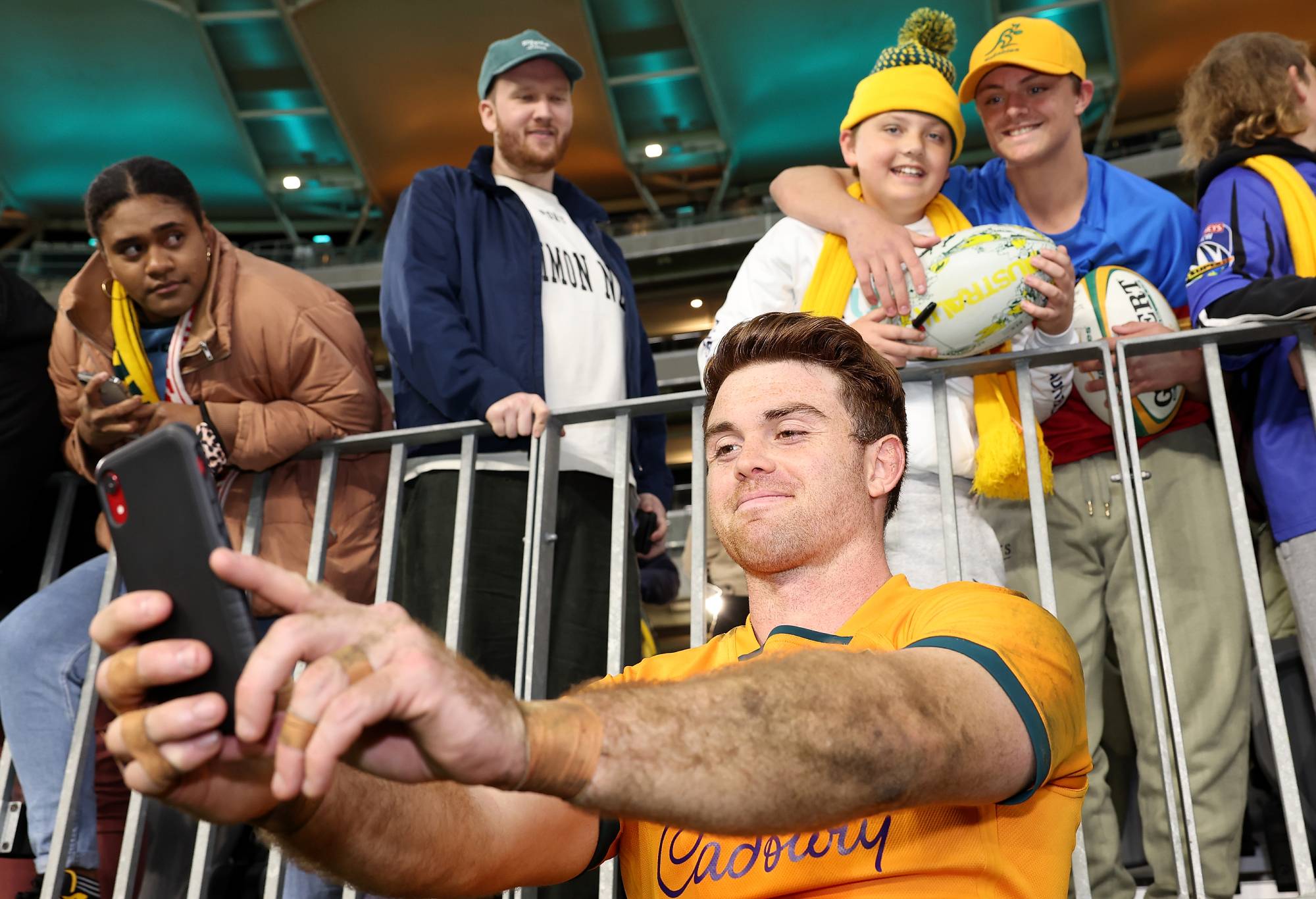 He was at it again in Perth. He was taking high balls and those first valuable strides forward so his cavalry could arrive to support him. He’s a very good footballer.

This in the fullback role when it was thrust upon him by Tom Banks’ ugly broken arm.

The difference made to the team’s performance by revising the rules to allow Kerevi and Koroibete to come in from their Japanese clubs is huge. Adapting those rules was smart and essential.

This was a major step up for lock Cadeyrn Neville and he performed admirably at the most intense level for the full 80 minutes. Big credit.

He made the wider training squads of previous Wallabies coaches Robbie Deans, Ewen McKenzie and Michael Cheika but never scored a Test. No hidden story here. He wasn’t good enough. Lacking aggression, body height, inconsistency and skills needing polish .. all were valid crosses against his name in the past. He’s worked, improved, performed for the Brumbies and totally validated his call-up.

Turning point Tests are a thing. Coaches are not just selling real change to their players. Every diehard and peripheral fan needs to be convinced of real progress for the Wallabies because mirages have been so regular.

What unfolded at Perth’s Optus Stadium on Saturday night has given Australian rugby a seismic jolt of good vibrations.

Sure, it’s not beating the All Blacks but toppling England and Eddie Jones when the odds are so against you is pretty damn close.

It’s hard to devise a script with more shades of potential disaster than what was thrown at the Wallabies.

OK. You’re going to lose your playmaker (Quade Cooper) in the warm-ups. Your fullback (Banks) will break his arm just past the 20-minute mark. You’ll be down your front-row rock at tighthead (Allan Alaalatoa) with a head knock. Your top lineout target (Darcy Swain) will be sent-off for a dumb head butt. 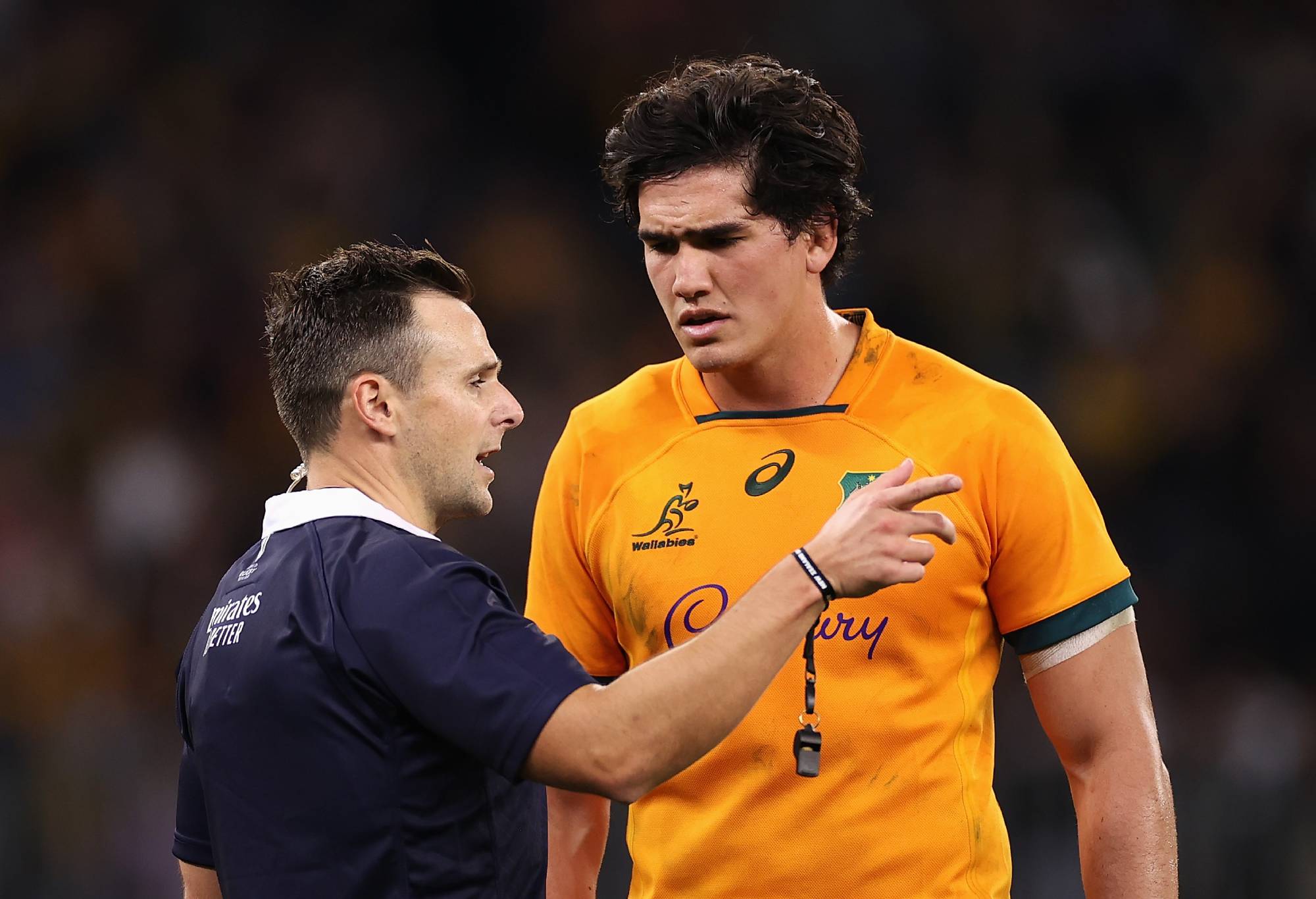 And you’ll have to play with 14 men for more than half the game.

Not since the Wallabies went down to 13 men against Wales at the 2015 Rugby World Cup have they found a way to win like they did in Perth.

Yep. The ill discipline has to be corrected and Cooper is needed to add more dimensions to the attack but this is a high to start a long Test season.

See, I went a whole story without saying it’s a great stepping stone to next year’s Rugby World Cup in France.

Forget the World Cup. This is a series, a hardcore battle, in its own right, not a warm-up.

Best of all, we do it all again at Suncorp Stadium on Saturday night. Can’t wait to see more wow from Henry Arundell. What a try touch to launch an England career.