'They punch back': Gleeson stars as Aussie As see off Tonga threat, but Samoa claim Pacific Nations Cup

Filipo Daugunu scored two tries and Langi Gleeson produced a powerhouse display as Australia A earned a 39-22 victory over Tonga in Fiji on Saturday to end the Pacific Nations Cup on a winning note.

However, the effort would prove to be in vain, with Samoa pipping Fiji in a tight contest thanks to a late try to secure a 23-20 win, and the title.

The Australians fought back from going behind to an early try from Samiuela Moli to notch up their second win in three games in the competition and move onto 12 points.

Australia A lead the standings with Samoa due to take on Fiji in the final game of the tournament later on Saturday, with the Samoans needing to win to claim the title.

“When they get punched, they punch back,” said former Tongan international Willie Lose of the Aussies in match commentary. “There’s a very good side here. They’ve got some quality players no question about that. They were belted but decided to fight fire with fire.”

Moli put Tonga in front in the second minute when he touched down at the back of a driving maul but, after Ryan Lonergan’s penalty, Daugunu dived to score in the corner in the 13th minute to give his side the lead.

Lonergan and William Havili traded penalties before the Australians extended the lead through Gleeson when he surged through the Tongan defence in the dying seconds of the half. 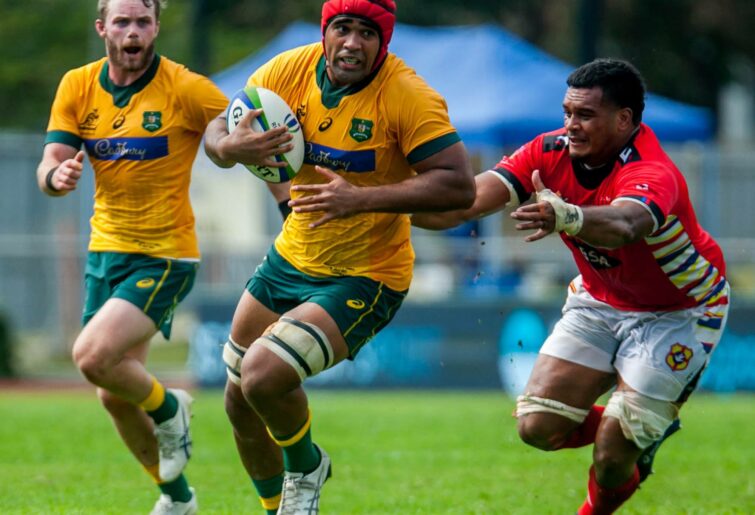 Langi Gleeson of Australia A With the ball during the World Rugby Pacific Nations 2022 match between Australia A and Tonga at Churchill Park on July 16, 2022 in Lautoka, Fiji. (Photo by Pita Simpson/Getty Images)

Hamish Stewart added a third try under the posts five minutes after the restart before Moli reduced the deficit for Tonga with a carbon copy of his opener.

However, Daugunu capitalised on Gleeson’s bulldozing run on the hour mark to score in the corner while James Tuttle cancelled out Jay Fonokalafi’s try to ensure a comfortable win for Australia A.

The Tongans were much improved on their two previous defeats and scored three tries from rolling mauls in an impressive show of power.

“We’re pretty proud,” said Lonergan. “We’re disappointed with our first game. After that boys dug in and we’re really proud of the effort and how we’ve come together over the last few weeks.” He added: “Go Fiji!”

The Australians, though, would be made to rue their first-round loss to Samoa, who ensured an undefeated tournament with a narrow win over Fiji to claim the title.

Replacement hooker Seilala Lam scored two tries following his introduction at the interval as Samoa overturned a 17-3 deficit to notch up a third successive victory.

“It took an 80 minute effort to get there, we know the Fijians are world class and they showed that in the first half,” said Samoa captain Michael Ala’alatoa.

“I’m so proud of our boys to hang deep. In the past we would’ve lost those games but we’re starting to build a winning culture.”

Needing to win to claim the title, Samoa looked like they were going to fall short as Fiji took control following a drive over the line from Albert Tuisue and an individual effort by Frank Lomani that left three defenders in his wake.

However, Lam rolled off the back of a maul to reduce the deficit two minutes into the second half and a pair of penalties from Rodney Iona moved Samoa to within four of the Fijians.

Lam struck once more 10 minutes from time when he again capitalised on the strength of the pack to touch down and Iona’s conversion gave Samoa a match-winning cushion.