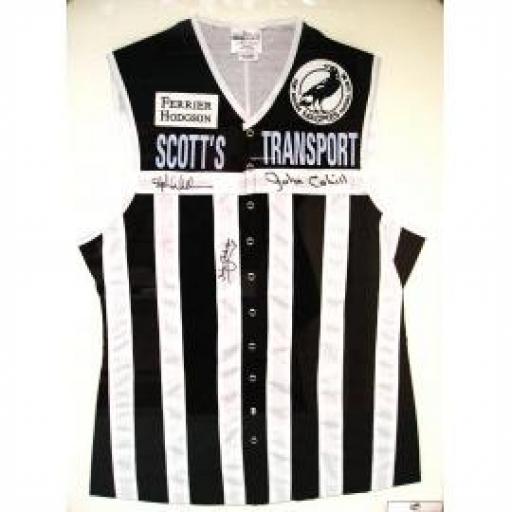 hub360 hasn't published any posts yet

Charlie had a nasty ankle Injury a couple of years ago,was a bit of a mess by all reports,I would and think Hinkley does avoid using him in the ruck to prolong his Career,he takes the Ruck in the Forward 50 area but reluctant to play him more minutes around the ground

might be reading your post wrong but Sam Hayes is on Port’s List,no pick required,I assume you mean trade Ladhams and use Hayes and Lycett as our 2 rucks.

Well done Bull much deserved,every chance he will become Port Captain next year ,another honor I believe he will be fantastic at

Meade was another that missed most the year with a rupture spleen I think it was or something,Hayes has had a knee reconstruction and a couple of other injuries along his short career,Port had 17 surgeries to players on their list this year,during the season,not over the off season,it is not and excuse about what happened the other day .I would agree on Marshall Williams and Farrell I would of said Bonner also 6 weeks ago,he might become a bit of a late bloomer like Amon did. Port have big wraps on Hayes,Ollie Wines has publicly said he prefers roving to him at training than any other Ruckman on our list,so unless Hayes requests a trade he won’t be going anywhere,hayes is putting the pressure on Ladhams for sure,I expect Hayes to play a few games next year

lol I move on pretty quick,am looking forward to trade week and see what surprises bob up

Yeah he would be gutted,he is friends with Dads Army [ I think they call them,they are heart and soul people of clubs,help out around clubs for the love of it] So his connection would be strong.It is the way we lost that have people upset the most not the actual losing of the game if that makes sense.

Who would you consider at Port who is not developing!I will admit I don’t watch all games but without making excuses could add some context to a few players.Ladhams has only played about 30 games coming of the rookie list,Butters Duursma had serious injuries this year and missed alot of games.I believe Rozee is still hampered by a long term foot injury.Willem Drew has come back from a nasty injury,missed a full season think it was,Lachie Jones was playing pulled his hammy twice this year missed many games,I liked Bergmanns 1st year,saw fredericks play a few games and he looked ok,by all reports big ruckman Sam Hayes was very close to debuting.Georgiades kicked 30 something goals he looked ok to me.Marshall is my only concern along with a guy who played 1 game in Dylan Williams,has massive potential but think his attitude is holding him back ,that is what I have read about him

lol,well he won’t be on one of his infamous benders,I picture him curled up on the kitchen floor in a state of dismay

Heard he has 3 years left on his contract at GWS,what would they want for him!!Our first pick hopefully is used on getting Dawson,we need Picks for Jase Burgoyne,not sure how many required for him so it would have to involve players or future picks .So this move baffles me,read he played some football in the backline for GWS,heard some talk clurey might look elsewhere for more opportunity,perhaps that is why they might be interested.

Yeah dont know why they would be Interested in Finlayson,the only logic I have come up with is I read that his girlfriend is due to have a baby and is from South Aussie,she is looking to go home and he is looking for a club.

How do you know they are good mates Mooty,a hunch,did fox sports say they are

I am here work sometimes prevents me from saying stuff

Stay the course,the list is getting built around Ollie Wines who is still only 26,we clearly lack in some area’s but there is no quick fix to it.I am sure the players we need we would go after but it is not that simple,does max king want to come to Port,does steven may want to come to Port ,does the bont want to come to Port.No they don’t,keeping adding Pieces to the list and keep drafting young talent,the geelong model is not the way to go for us in my opinion.If we go slightly backwards next year so be it with Gray and Boak etc getting on,players like motlop etc will not get much game time next year,like Hartlett and westoff the last couple of years.Lachie Jones will play as will georgiades .On Hinkley he wont be getting a new contract from Port after his current one unless he wins a flag.We are not good enough yet but there is a lot of improvement to come from this list.Closing statement .Name me a coach who is better than Hinkley and will come to Adelaide and will win a flag with this list,and don’t say Clarkson

Heard Lienert in a interview saying he is happy doing what he does for Port,so I think and hope he stays.Finlayson from GWS has apparently had a medical done at Port,do not know if thats good or bad,haven’t seen enough of him to make an opinion.Dawson would be handy for us I reckon.wouldn’t turn him away if he wanted to come to us,

Look at Richmond,have 3 flags in last 4 years and are in a very nice position to do something going forward already,dont have to rebuild just a reset type thing .If they make the right decisions they will be back in no time

Agree.If Cats fans are happy good for them.I know what I would want my club to do

I know,you said Dixon is no threat but has the same amount of contested marks as Naughton.Dixon has 46 goals Naughton has 44.I think he would be a threat to the Bulldogs side in my opinion

lol,I am fine,not nervous at all,looking forward to it.If it rains beware the Raging Bull,a sore Bont will not want to cross paths with the bull

If you have any concerns Chanon what part of the ground are they,your backline!!

Last I read Dixon has the most contested marks inside 50 in the league so if you don’t consider that a threat that is fine,it will take 2 defenders to bring the ball to ground though,that is when either Fantasia Gray Rozee or Motlop become a threat,Georgiades is no threat as he is out with a hammy

Yep,think he hurt it against Dogs in last home and away,tried it out in the SANFL last week but was still hampered by it, a big blow but gotta take a fit side in

Beveridge bullish on the Bont, but key defender in doubt for prelim

If I am not back on here I won’t say good luck to you mate,one of us will be very disappointed on the weekend,If you guys knock us over I will be on the Doggies bandwagon for the big one.I hope that is not the case 🥊 🥊