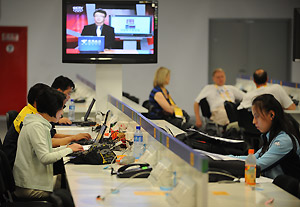 The news last week that Chinese censors were screening the Internet usage of some 20,000 accredited journalists at the Beijing Olympics, and that the IOC had tacitly approved of this practice by not registering its disgust at the highest levels of the Chinese government when it knew long ago what was going to happen, is a blight on the Olympic movement.

The predictable public outcry that followed saw the IOC and the Chinese authorities feverishly unblock sites that hitherto had been deemed corrupting and dangerous to the Chinese citizenry, over one-fifth of the world’s population.

These included the BBC’s China page, Chinese Wikipedia and Facebook.

The clean-up job didn’t impress Dick Pound, the former head of the World Anti-Doping Agency. “This should not have been in the glare of press discussions in August 2008,” he said, “as we have all known that this could be a problem ever since Beijing were elected and we should have taken whatever steps necessary.”

In my opinion it was bad enough that a country with as chequered a human rights record as China got the Games in the first place.

But so did Nazi Germany. So no surprises there.

All the same, press freedom should always be one of the fundamental principles of the Olympics, an inviolable tenet with no brook for compromising.

There has been the usual banging on about how the Games are China’s way of coming out to the world.

But there has to be some reciprocity in the exchange. If China wants to come out to the world, it needs to accept what the rest of the world – Putin’s police-state Russia and a few other despotic republics aside – regards as a sacrosanct right.

Assurances were made long by the Games hosts to Olympic chiefs that the same freedoms previous Olympiads had enjoyed would be upheld.

But Beijing began playing a very different tune in the run-up to the Games. “Sufficient access” was how one Beijing Organising Committee media flack described China’s commitment to press freedom.

There’s more at stake here than just the keyboard predilections of a few stringers in a newsroom in Beijing for the next 18 days. It’s about the integrity of the Olympic movement, what it stands for, and
what we all want it to represent.

If it’s good enough for those aforementioned sites to be unblocked during the Olympics then they should stay that way long after the Games are over and everyone’s gone home.

It is incumbent upon the rest of the world to have China uphold “Olympic values” before, during and after the Beijing Olympics. Otherwise, this glorified athletics carnival stands for nothing.