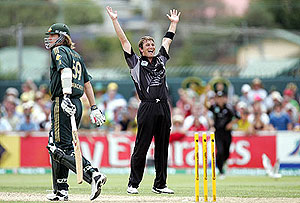 Despite last week’s Indian debawcle (note Tony Greig-style pronunciation to commemorate his Bogong-like arrival for the summer), every pundit and his canine thinks Australia will thrash a New Zealand team missing Jacob Oram and the Bond brothers, Shane and James.

However, long-suffering Black Caps fans can take a quantum of solace from the following list of the Top 5 Kiwi Cricket Moments:

1. First Test v. Australia, Brisbane, 1985-86 (c)
The Gabba Test has more or less been a gimme for Australia since the Windies lost their mojo, but it was different in the Greg Ritchie-intensive days of the ’80s. In this famous fixture, Richard Hadlee put on one of the great seam bowling displays of all time. He claimed 9-52 on the first day (walking trivia question Vaughan Brown got the other one, Roar columnist Geoff Lawson), plus 6-71 in the second innings. In between, John Reid and Martin Crowe peeled off tons (Hadlee made 54) and Australia was pumped for 7-551 to lose by an innings and 41 runs. NZ won the third Test in Perth as well, for a famous series victory.

2. Third Test v. Australia, Melbourne, 1987-88
NZ held the Trans-Tasman Trophy on the strength of their performance in 1985-86 and only needed to level this 3-match series to retain it. This looked likely as Australia stumbled to 9-227 in pursuit of 247 on the final day, and certain as the ball smashed into Craig McDermott’s pad plumb in front of the stumps. However, these were the days before neutral umpires, and the Aussie official duly found some doubt to give the benefit of. Mike Whitney famously survived the final over from Hadlee (and 18 balls in total) and NZ had to be content with a moral victory. This was also the Test Greg Dyer falsely claimed a legside ‘catch’ off my namesake, a mistake which insulted Andrew Joneses all over the world and implicitly ended his career.

3. World Series Cup Third Final v. Australia, Melbourne, 1980-81
Not just any moral victory, this one, but the greatest moral victory in cricket history. Australia cruised to 4-235 (a big score in a one-dayer in those days) with skipper Greg Chappell contributing a characteristically elegant 90. His batting was forgotten four hours later though, when he instructed brother Trevor to go three-pin bowling off the last ball of the final over to prevent the Kiwis from hitting an improbable tying six. Bruce Edgar stood helpless on 102* at the non-striker’s end while former All Black five-eighth Brian McKechnie (then clad in All Brown) threw his bat away in disgust.

4. First Test v. England, Christchurch, 2001-02
Another loss, but the only thing anyone besides Graham Thorpe remembers is Nathan Astle’s magnificent 222 off 168 balls. He brought up his double ton off just 153 balls, a staggering 59 balls quicker than Adam Gilchrist’s earlier record. His second 100 came in just 39 deliveries, the fourth 50 in a staggering 17 balls, including 6 sixes and 2 fours (and not counting the two actual balls that were lost on grandstand roofs). A truly titanic display of hitting.

5. First Test v. West Indies, Dunedin, 1979-80
Probably New Zealand’s finest hour. Again, Hadlee was the star, taking 11-102 against a batting line-up featuring Greenidge, Haynes, Kallicharan, Lloyd and Lawrence Rowe, and getting a fifty to cement a first-innings lead. Chasing 104 in the fourth innings, NZ got them 9 down, with Lance Cairns, Gary Troup and well-known bunny Stephen Boock getting them home. The Kiwis drew the second and third Tests against a bowling line-up of Roberts, Holding, Garner and Croft to take the series 1-0, the last time the mighty Windies would lose a series until 1995.

Good luck in Brisbane lads. It would be nice to see a decent game of cricket!