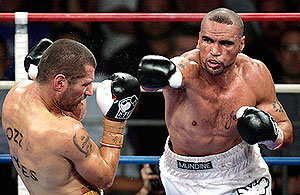 Sydney Sun-Herald readers will be familiar with Danny Weidler from his inside-back page gossip column, The Last Word. League fans will also know him from Channel 9, where he has cultivated a veritable forest of wooden delivery.

Despite being overblown, self-important and basically the same every week, Weidler’s column remains one of the weekend’s guilty pleasures. Here’s my 5-snippet tribute.

1. That Rugby League player you thought was a tool is not as much of a tool as you thought he was
Whether it’s Paul Gallen visiting sick kids between testicle grabs, stitch-rippings and renditions of “you black c***”, or Willie Mason courageously under-performing between public urinations, Danny never misses a chance to talk up the undeserving. I presume it’s his way of gaining exclusive access to the relevant bad boys and their agents?

2. Sonny Bill Williams is the new Muhammad Ali
A former regular in Snippet 1, Sonny Bill Williams is now a weekly feature in his own right. Whether it’s an update on his French lessons (the language ones, not those involving Candice Falzon), his rugby career or – in this week’s highlight – an improbable comparison to the king of all sportsmen, Danny rarely misses an opportunity to write about New Zealand’s thirteenth best centre.

3. Anthony Mundine is the old Muhammad Ali
Either Khoder Nasser is on speed-dial, or Danny’s office is in the back booth of the Boxa Bar, because The Man features on Sunday mornings as surely as an eight-count follows a knock-down. Story A is “Mundine is Australia’s Greatest Athlete” while Story B is “Mundine is misunderstood” (see also Snippet 1). I enjoy Mundine more than most, but it’s fair to say he overtrades in Danny’s columns given he fights only three or four times a year.

4. Wendell Sailor is good for the game, whichever one that is at the moment
Big Dell hasn’t attracted many headlines of late, probably because he hasn’t done anything incompetent or stupid. But when he does, you can bet he’ll be back in Danny’s column!

5. Brett Lee is fitter than ever – really!
A bit unfair to pin this one exclusively on Danny, since this story spreads like swine flu every time the paceman’s Test spot is in doubt. However, the likeable quick has been promoted by Weidler as often as anyone else, despite averaging 32 or more with the ball in all but three years since his debut in 1999.