The Wallabies start with a bang and a new star 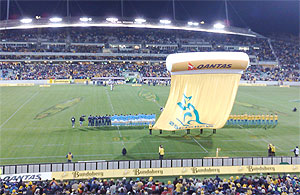 As young men in New Zealand we were told always to look at a girl’s mother before getting serious about her. Something of that mantra seems to have rubbed off on John Mitchell, the former All Blacks coach and now coach of the Western Force, when he cast an eye over a very young James O’Connor.

O’Connor had been spurned by rugby league scouts because he was thought to be too small.  Had no one told them about Clive Churchill?

The lad started to play rugby union. Mitchell went on his scouting mission. Saw the obvious genius in his play. But more importantly noted that his father was a chunky, well-built man.

Like father, like son, Mitchell reasoned. O’Connor was snapped up by the Western Force.  Last season he was called into the Hong Kong Sevens and played so brilliantly your correspondent wrote a blog on him giving him a potential kiss of death by calling him ‘the next Tim Horan.’

Later on last year Mitchell gave O’Connor a start for the Western Force against the Hurricanes. The youngster handled the massive Ma’a Nonu quite comfortably.  He was picked for the Wallabies European tour which stymied any chance of the South Africans or the New Zealanders (two other countries he was eligible to represent) picking him up.

And now, in his first Test and still filling out, O’Connor has become the rare player to score three tries on his Test debut.

Admittedly, he ran in a total of about 15m for his tries. But this disregards the fact that there is a high skill to position yourself in a way to make scoring look easy.

The great players in any game make their mastery look easy. O’Connor makes scoring tries look easy.  But, of course, it isn’t.

When Lachie Turner made that sizzling break after about 4 minutes of play, Stirling Mortlock and Berrick Barnes had come in towards the lineout to create the gap, and O’Connor drifted forward on an outside line so that Turner was able to pick him up as he was tackled near the try line.

This ability to position himself to continue the movement and cross the line if the gap is there is very much an ability that Tim Horan, of blessed memory, the greatest Wallaby inside centre, had. Horan could even read David Campese on the burst, when the great winger himself had no idea where he was going and what he was going to do.

But in the Rugby World Cup quarter-final against New Zealand in 1991 when Campese threw a ‘hail Mary’ pass over his head after a bewildering run, there was Horan to grab it and cross for the try.

Robbie Deans is patiently building up a Wallaby side that is going to be extremely hard to hold this year and even more so in 2011, the Rugby World Cup year.

Italy are a noted scrummaging and mauling side. But in neither the scrum, until Al Baxter was replaced, or the rolling maul were the Italians able to do much damage to the Wallaby pack. The pack will benefit from its dedicated scrum coach, Patricio Noriega, who was brought up in Argentina in the days of the bajada, 8-man shove.

The Wallaby lineout was secure until the erratic Tatafu Polota-Nau replaced the splendid Stephen Moore. It would be interesting to see if someone else in the pack can throw the ball in. Polota-Nau played number 8 for some years and in time this might be his Test position.

The backs were impressive in the way they took the right options on most plays and then executed these options. The Deans notion of playing what is in front of you once the play unravels is beginning to be learnt by the backs.

I was impressed, too, along with Greg Martin, on the way the back three worked as a unit, always positioning themselves so that they could run back kicks that were not well-directed.

The Wallabies look to be a more formidable and intelligent side than last year’s model. Admittedly the Barbarians and Italy (which now has lost a record 9 consecutive Tests) were not confronting opposition.

In two weeks, when the Wallabies play France at Sydney we will probably get a better indication of just how good the 2009 Wallabies and their new star, James O’Connor, really are.

My guess is that a very good team is being created.